Pres Trump met with PM Netanyahu at the UN today and said to the press afterward “I like the two state solution.”

Then I read the Haaretz article and the TOI and the Breitbart articles on the same topic, They all assumed that what he intended was to create a Palestinian state. Bibi insisted that his red line was that Israel must hhave full security control west of the Jordan River and that the state won’t be a danger to Israel.

No one mentioned the Jordan Option which considers Jordan as the Palestinian state. Thus if it was followed it would yield a two-state solution.

END_OF_DOCUMENT_TOKEN_TO_BE_REPLACED

The bloodiest day in Gaza for two months appears to stem from a decision by the group, one that follows an organized plan of action to rein in the violence at least until it rules that the time for a confrontation has come

A Palestinian woman waving a national flag near burning tires during clashes along the border with Israel, September 28, 2018.AFP

Friday’s bloodshed in the Gaza Strip – seven Palestinians killed by Israeli fire, including two boys 12 and 14, and dozens wounded – was the worst in almost two months. The level of violence appears to be a direct result of a decision by Hamas.

The organization’s leaders in Gaza have been threatening for weeks to escalate the clashes with Israel along the border due to the impasse in talks on a plan to rebuild the enclave. During this period, the frequency of the Palestinians’ violent demonstrations has increased to almost every day, and the same goes for attempts to break through the border fence. On Friday, dozens of demonstrators managed to get through the fence, until soldiers drove them off.

END_OF_DOCUMENT_TOKEN_TO_BE_REPLACED

National Security Advisor John Bolton’s verbal assault on the International Criminal Court earlier this month raised a predictable outcry. But anyone who cares about justice should be cheering him on. There are many reasons for this, but here’s one: In its treatment of one country in particular, the court has already violated fundamental principles of justice and demonstrated blatant bias.

The ICC has considered or is considering several complaints against Israel. Though none has yet resulted in charges, judges from the pretrial chamber—who normally become involved only after charges are filed—have already intervened twice. In both cases, they violated standard rules of procedure in an effort to tip the scales against Israel.
END_OF_DOCUMENT_TOKEN_TO_BE_REPLACED

As an officer in the Israel Defense Forces, Ofir Dayan served in hostile territory in Gaza and Lebanon. But, the undergrad told The Post, nothing prepared her for life at Columbia University.

Ofir, the 24-year-old daughter of Israel Consul General in New York Dani Dayan, said she is harassed and threatened over her background by the group Students for Justice in Palestine (SJP), and that the school is failing to protect her.

“SJP is violent,” she said. “I’m worried about my personal safety.”
END_OF_DOCUMENT_TOKEN_TO_BE_REPLACED

What exactly happened over Syria’s skies, play-by-play ? Israel hopes Russia will ultimately forgive the downing of its plane, but much of it depends on Trump

The September 16 attack by the Israel Air Force in Latakia, at whose conclusion Syria’s aerial defense system downed a Russian intelligence-gathering aircraft, came at the end of a particularly sensitive day in the Syrian arena. A few hours earlier, in Sochi, Russia, the president of that country and Turkey had agreed on details of an arrangement which, for the time being, is delaying a major airstrike by the Russians against the tens of thousands of rebels and nearly three million civilians who are trapped in the Idlib enclave. That area, located in northern Syria, is the last central bastion remaining to opponents of Syrian President Bashar Assad after seven-and-a-half years of civil war.

END_OF_DOCUMENT_TOKEN_TO_BE_REPLACED

Earlier this year the US pulled out of the nuclear deal with Iran, re-instituting potentially crippling sanctions against the regime. At the UN, President Trump delivered a similar message. America, he said, would not allow “the world’s leading sponsor of terrorism” to possess “the means to deliver a nuclear warhead to any city on Earth.”

Bolton went further and threatened “terrible consequences” for those doing business with Iran. But Britain and Europe are intending to do exactly that.

END_OF_DOCUMENT_TOKEN_TO_BE_REPLACED

by Gerald A. Honigman

A report by Avi Abelow at the Israel Unwired website on September 25, 2018 about Jews on the Temple Mount arrested for singing Hatikvah caused me to take a few extra blood pressure pills that day https://israelunwired.com/arrested-on-the-temple-mount-for-singing-the-israeli-national-anthem/. Let’s check out some excerpts…

“A surreal scene took place near the holiest place for the Jewish People…After a few words of Torah in memory of Ari Fuld, who was murdered by a Muslim terrorist, a group of people sang Hatikvah…the Israeli national anthem. The reason police arrested them was because they sang it on the Temple Mount in Jerusalem…Thanks to appeasement to the intolerant, violent, terror-laden Muslim world, Israel now has strict laws against Jews. It forbids Jews from any Jewish activities on the holiest site to the Jewish people, the Temple Mount…After we were released…when we went back to the entrance to ask what was happening, the policeman yelled at us again and pushed us out. When I told him I was not used to a policeman shouting at me and pushing me, without explaining what I had done, he shouted at me: ‘Get used to it!’ ”

END_OF_DOCUMENT_TOKEN_TO_BE_REPLACED

And this is why France and most of Western Europe is doomed. You can deny reality, but you cannot avoid the consequences of denying reality.

The hijrah (jihad by immigration) has roiled the continent and the refusal to address the root cause leaves France and inevitably Western Europe at the mercy (and there is none) of their invaders.

END_OF_DOCUMENT_TOKEN_TO_BE_REPLACED

Rod Bryant and Jerry Gordon interview Mudar Zahran, Secretary General of the Jordanian Opposition Council. The interview was inspired by Zahran’s amazing recent speech before the European Parliament addressing why BDS has impoverished Palestinians and why Israel constitutes an economic and military security force for good in the region. The Youtube of Zahran’s speech was viewed by upwards of 250,000 across the Middle East.

I am a woman outraged by sexual assault.

I am a woman outraged by sexual assault allegations made for political purposes.

I am a woman outraged by sexual assault allegations made for political purposes to influence elections.
END_OF_DOCUMENT_TOKEN_TO_BE_REPLACED

by Seth Frantzman, The Hill

Russia and Turkey agreed to a diplomatic solution for Syria’s northern Idlib province at a meeting in Sochi on Sept. 17. It followed weeks of concern that Syria’s regime, backed by its Russian and Iranian allies, would assault the last rebel stronghold in Syria, an area home to several million civilians as well as a coterie of Syrian rebel and extremist groups.

The Russia-Turkey deal may provide a lesson for U.S. foreign policy in the Middle East. It shows that a country’s goals can be achieved, and conflict avoided, as long as military force is a clear option and a country stands by its allies. In this case, Russia and Turkey both were committed to their allies and refused to see them defeated or lose face in a potential battle.

END_OF_DOCUMENT_TOKEN_TO_BE_REPLACED

Tommy Robinson joins Owen Shroyer on The War Room on what could be his last live interview before going back to jail for the crime of reporting on Islamic grooming rape gang trials.

END_OF_DOCUMENT_TOKEN_TO_BE_REPLACED

The World Bank says that the “economy” of the Gaza Strip is collapsing.

This is or should be about as shocking as the discovery that there is gambling at Rick’s café. The word “economy,” which implies at least some productivity, barely fits. Gaza has survived on UNRWA stipends that have supported 1.3 million people with Palestinian refugee status (out of a total population of 1.8 million), on payments from the Palestinian Authority (PA) to its tens of thousands of “employees” (who either do nothing or work for Hamas), and on other donations from Europe, the US, and the Arab world.
END_OF_DOCUMENT_TOKEN_TO_BE_REPLACED

Looking back on the day’s riveting events, it is amazing how effectively the Republicans and Judge Kavanaugh sidestepped the perils and emerged perhaps even stronger than the morning augured.

If Christine Blasey Ford were to be cross-examined too fiercely, especially if serially by eleven mostly older Republican men, the stakes would be far more perilous than losing a Supreme Court nominee on the precipice of confirmation. More dangerously, such a debacle could drive independent White women voters who have backed Republicans and who are enjoying a robust Trump economy, to remain home six weeks from now on Election Day or, worse, to vote Democrat.

However, if Dr. Ford were not to be challenged effectively, that also would imperil Republicans, as the GOP, nevertheless, would be standing by a damaged SCOTUS nominee under a dark cloud.
END_OF_DOCUMENT_TOKEN_TO_BE_REPLACED

Opening his speech by stating “Jerusalem is not for sale, and the rights of the Palestinian people are not up for bargaining,” the Palestinian president said that Israel’s “racist” nation-state law nullifies the two-state solution, adding that it will lead to a single “racist, apartheid state.” He said that Israel’s “colonial occupation continues to suffocate us.”
END_OF_DOCUMENT_TOKEN_TO_BE_REPLACED

– IRAN WAS THE PRINCIPAL TARGET
– LESSER TARGETS OF HIS WRATH WERE, HEZBOLLAH, EUROPE, UN.
– HE SHOWERED PRAISE ON TRUMP, ISRAEL, ARAB NATIONS AND THE IRANIAN PEOPLE
– PLEDGED TO NEVER ALLOW IRAN TO DEVELOPE NUCLEAR WEAPONS

In the main Labour Party conference hall in Liverpool on Wednesday there were more Palestinian flags being waved than at a Hamas rally in Gaza, or at the opening session of the Palestinian Parliament at Ramallah.

The vote by party members to debate Palestine was the fourth most popular after housing, schools, and justice for the Windrush generation. The subject of “Palestine” gained more votes (188,000) than Brexit and the National Health Service.
END_OF_DOCUMENT_TOKEN_TO_BE_REPLACED

PA leader appears poised to cut the $96 million he sends monthly to the Hamas-run Strip, which would almost certainly plunge the coastal enclave into fighting 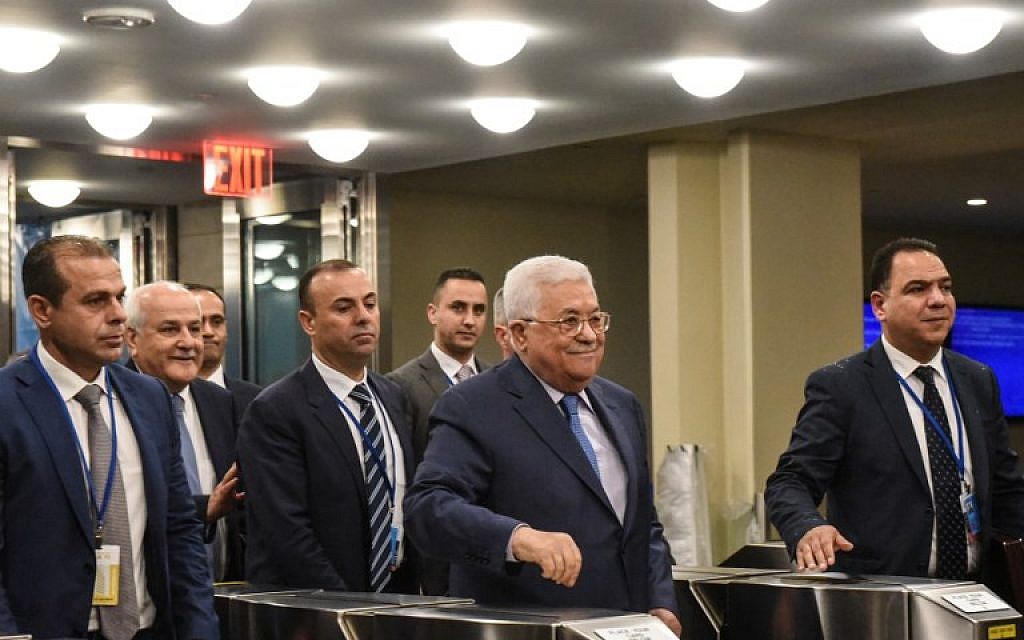 Hamas parliamentarians convened in the Gaza Strip on Wednesday and announced breathlessly that Mahmoud Abbas’s presidency was unlawful.

This not a surprising statement given the organizational affiliation of the speakers, as Hamas and Abbas’s Fatah party have long been at odds.
END_OF_DOCUMENT_TOKEN_TO_BE_REPLACED