Historic decisions may require careful consideration, but they also require courage and determination.

Is Israel really hesitating to grab the opportunity presented by the “deal of the century”? There are troubling signs that this might be the case.

First, the plan to apply sovereignty to large parts of Judea and Samaria and the Jordan Valley involved 30% of the territory. Then came the idea of extending sovereignty in phases – a bad idea that only invites round of violence and terrorism. Now, it appears we’ve sunk even lower, as Arab officials have said that the sovereignty bid will exclude the Jordan Valley, and any move made in Judea and Samaria will only be symbolic.

Only 27% of respondents said they believed Netanyahu would stand his ground, even at the cost of his relationship with Trump, while 53% said he would fold.

The comprehensive poll of 1,182 respondents representing a statistical sample of the Jewish population of Judea and Samaria was taken between June 4-7 and had a margin of error of 2.4%. The poll was taken for the right-wing, pro-settler organization Regavim by Direct Polls, which is owned by Shlomo Filber, a former Netanyahu confidant who is currently a state’s witness against him in his criminal cases.

Only 27% of the respondents said they believed Netanyahu would stand his ground, even at the cost of his relationship with Trump, while 53% said he would fold. The rest declined to respond or did not know, which was true of all those who did not choose one of the answers in questions whose answers did not add up to 100%.

END_OF_DOCUMENT_TOKEN_TO_BE_REPLACED

If you live in a Western nation like Canada in the 21st century, you have more freedom, prosperity and peace than most of the rest of the world at most other times in history. Yet these countries have never been at greater risk. The threat is not pandemics, climate change or war but something more insidious.

Modern Western civilization grew out of the Enlightenment of the 17th and 18th centuries. The ascendancy of reason in human affairs produced the scientific method and later the Industrial Revolution. Add in the rule of law, individual liberty, private property and capitalism, and you have the basic recipe that has raised most of humanity out of poverty over two centuries.

New academic doctrines are moving the world, or at least the West, from this triumph to decline. They dismiss science — real science — in favour of political agendas, in which theory trumps facts.

END_OF_DOCUMENT_TOKEN_TO_BE_REPLACED

There has to be an active fight for social cohesion, impossible as that may seem, or America is doomed. Israel has managed to do it. Op-ed.

I have spent time in both those countries, but that outsider identity sometimes gives me a perspective that is difficult for those living inside. As a Zionist, moderately religious, politically and culturally conservative intellectual, I am not fully at home in a Canada whose Prime Minister advocates “inclusive diversity” as the new Canadian ethos. For me, this cultural relativism and its welcome of immigrants who reject our very western values, endangers my family, many of whom are identifiably Jewish.

Canadian mainstream media, universities and the main political parties exercise their power to minimize the voice of conservative and pro-Torah writers. And so, most of my essays are carried in the U.S. – Frontpage Magazine, Jewish Voice of New York, New English Review, and in Israel with Israel National News and Israpundit.

END_OF_DOCUMENT_TOKEN_TO_BE_REPLACED

Antifa in the United States

END_OF_DOCUMENT_TOKEN_TO_BE_REPLACED

Empirical and anecdotal evidence shows that Antifa is, in fact, highly networked, well-funded and has a global presence. It has a flat organizational structure with dozens and possibly hundreds of local groups.

END_OF_DOCUMENT_TOKEN_TO_BE_REPLACED

Clearly, what is systemic about racism in America can be found in the Democrats’ DNA

If the upcoming presidential election on November 3, 2020, were not so serious, it would be downright hilarious just watching the Democrats twist themselves into pretzels in their efforts to project onto President Trump their own lengthy and shameful record of racism.

As Bill Federer of AmericanMinute.com has exhaustively documented:

END_OF_DOCUMENT_TOKEN_TO_BE_REPLACED

By Dick Morris on June 29, 2020<
>
The Democrats want, above all else, for Trump to be defeated. Part of their plan is to so paralyze the country with fear of the virus as to delay any economic recovery until after Election Day.

Right now, the glass can be seen as half-full or half-empty. Virus deaths are down sharply while new cases and hospitalizations, particularly in states that never really closed down during the initial outbreak, are up.

The Trump administration says that the increase in cases is being driven by an increase in testing and points out that a disproportionate portion of those who test positive are younger people, not likely to die of the disease. For them, it is more like a severe case of the ordinary flu.

END_OF_DOCUMENT_TOKEN_TO_BE_REPLACED

You associate yourself with others with whom you share a religion or ethnicity. You believe that the government and other authorities ought to be dominated by your group. In a democracy, you vote for them exclusively. In a non-democracy, every group tries to install its own people in positions of power, by force if need be.

When you have identity politics, the in-group gets protektziya. If you are a member of the in-group you get government jobs, your business gets lucrative government contracts, and you get your parking tickets fixed. If not – well, it depends on how bad your regime is. In a place like Syria, you stand a good chance of being murdered.
END_OF_DOCUMENT_TOKEN_TO_BE_REPLACED

The 24/7 fake news media insists that the mob is tearing down statues, smashing windows, looting, and burning down cities because a bad cop killed a man. I don’t think so.

Does the mob burn down hospitals when a bad doctor kills a patient? No, why not? Because there is no advantage to the rulers of the mob in burning hospitals to the ground. The phrase “mob rule” is a misnomer because the mob is not self-ruled, the mob does not rule the mob, the mob has leaders.

END_OF_DOCUMENT_TOKEN_TO_BE_REPLACED

Foreign Minister Gabi Ashkenazi has said that Israel will not annex the Jordan Valley, according to a television report last Wednesday.

Both Netanyahu and Gantz are begging Abbas to negotiate.

Shaked spoke out amid growing reports that Israel planned a partial sovereignty plan over settlement blocs and would not at this time annex the full 30% allowed.

Israeli plans to apply sovereignty over portions of the West Bank will not include the Jordan Valley, Yamina MK and former Justice Minister Ayelet Shaked told Army Radio.

Prime Minister Benjamin Netanyahu “has given up on the Jordan Valley” because of the opposition from the Arab world, Shaked said adding that her party has received reports to this effect.

Shaked spoke out amid growing reports that Israel planned a partial sovereignty plan over settlement blocs and would not at this time annex the full 30% allowed it under US President Donald Trump’s peace plan, which he unveiled in January.

END_OF_DOCUMENT_TOKEN_TO_BE_REPLACED

*Gehenna: (in both Judaism and Christianity) hell.  Bill Gates openly admits that he is a globalist and eugenicist working toward the New World Order with his plan to mass vaccinate and depopulate the planet by 10% to 15%, which may suggest to the alert-minded that his vaccinations will not improve life, but eliminate life.  Bill Gates’s Quantum Dot Vaccine will have an enzyme called Luciferace.  When injected into the human, it will “mark” the person like cattle, and be trackable.  The patent application filed by Microsoft Technology Licensing, LCC, and registered on 26 March 2020, is WO/2020/060606, known as “666” and titled, “Cryptocurrency system using body activity data.”

There have always been voices whose aim it was to abolish national sovereignty for globalism – a Master Plan for world conquest.  In addition to the discernible despots, there are the self-defined intellectual elites – the enlightened ones – whose world government would guarantee protection for the submissive or unaware in exchange for their freedom and human dignity.

Bill and Melinda Gates, aided and abetted by the Obama administration, leads the way in destroying public education, turning out undereducated Marxists with his Common Core curriculum.  It also oversexualizes the children toward transgendering, demeaning the boys for toxic masculinity, their virility and desire to father the next generation with the anticipated result of depopulation, Gates’s ultimate purpose.   His foundation for depopulation, heavily financed by Warren Buffet’s $30 billion donation, contributes to engineering millions, perhaps billions, of human casualties and tragedies.

END_OF_DOCUMENT_TOKEN_TO_BE_REPLACED

If Trump is defeated, the Democrat’s Progressives will bring down Israel like a Jefferson Davis statue.

The Palestinian Authority is a creation of Israel. Without IDF and Shin Bet, this “authority” would implode in a minute. A brief visit over Nablus is enough to hear the shots from the refugee camps and understand that without Israeli protection this Palestinian “puppet” would be devoured in a gang and terror war and a Hamas coup, like in Gaza in 2007, after precisely that – an Israeli withdrawal.

Amman owes its protection to Israel, as well as to the United States.

For years Israel has been the target of international retaliation, of UN resolutions, of European Union dossiers …

As for the choice of the Jewish left between “democracy and apartheid”, in reality advocating Israel’s withdrawal from Judea and Samaria poses another dilemma before the Jewish state: annexation or suicide.

END_OF_DOCUMENT_TOKEN_TO_BE_REPLACED

Right-wing would easily win majority, one TV survey indicates; in second poll, 58% say they disapprove of Netanyahu’s performance on the economic aspects of COVID-19 outbreak 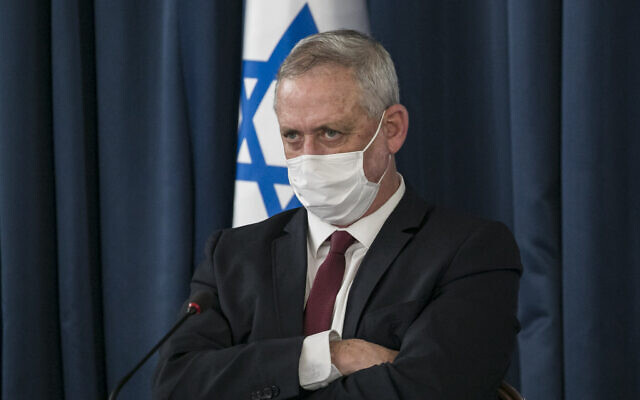 Defense Minister Benny Gantz at the weekly cabinet meeting at the Foreign Ministry, in Jerusalem, on June 28, 2020. (Olivier Fitoussi/Flash90)

Benny Gantz’s Blue and White party would win just nine of the 120 parliamentary seats if Knesset elections were held today, even as Israelis sour on Prime Minister Benjamin Netanyahu’s response to the coronavirus crisis, according to a pair of television polls on Sunday night,

The survey by Channel 13 was conducted on the backdrop of reports that Prime Minister Benjamin Netanyahu is looking for a pretext to dissolve the unity government to prevent Defense Minister Gantz from becoming premier in November 2021, and due to coalition disagreements with Blue and White.

Netanyahu is reportedly interested in fresh elections — the fourth since April 2019 — due to favorable polls. Sunday’s poll was no different and predicted a landslide victory for the premier’s right-wing bloc.

END_OF_DOCUMENT_TOKEN_TO_BE_REPLACED

By Alexander MaistrovoyAntifa, the BLM and the globalist elite standing behind them are driven by the desire not for reforms, but for the total destruction of Western civilization. In their hatred they merge with the “jihadists”In April 1918, the Bolshevik government headed by Lenin signed the decree “On the Monuments of the Republic.” Monuments “in honor of the kings and their servants” must be demolished, but with a significant reservation: if they had no “significance from either historical or cultural point of view”. This allowed preserving a significant part of cultural and architectural heritage of Russia. Thanks to it, in our time tourists can see the beautiful monuments of Russian tsars and emperors, although all of them were “ruthless exploiters of the working people”: Peter the Great, who built Saint Petersburg on the bones of millions of peasants; Catherine the Great; Alexander I of Russia (famous Alexandrovskaya Kolonna in Petersburg), Paul I of Russia and so on. People’s Commissariat for Education even preserved the monument to Nicholas I because of its cultural value (the monument was erected by the French architect Auguste de Montferrand). Although Nicholas I is traditionally considered as retrograde and tyrant in Russian historiography. Surely, nobody could even think about demolishing monuments to Russian victorious generals and sailors, greatest scientists, composers, writers and poets. Thus, in St. Petersburg they preserved the monument to the sailors of the Russian battleship “Imperator Alexander III” (1908) who died during Battle of Tsushima against Japan.