“We are not calling to shut down the mission tomorrow morning but we want them to become more efficient,” Israeli ambassador to the UN says of United Nations Interim Force in Lebanon. UNIFIL includes more than 9,400 ground troops and over 850 naval personnel in a Maritime Task Force. Its budget from July 2018-June 2019 was $474 million.

By  AP and Israel Hayom Staff 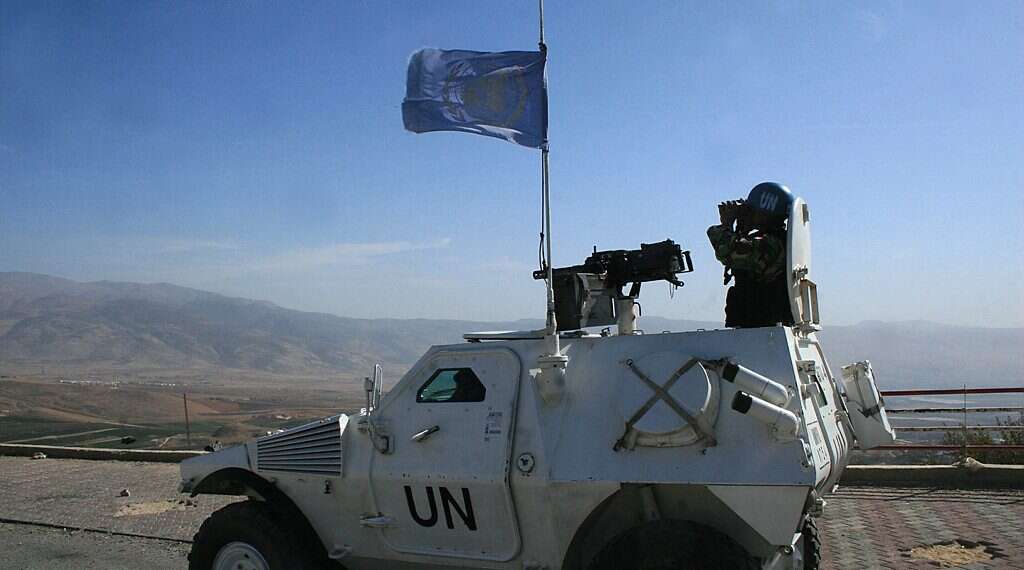 A peacekeeper of the United Nations Interim Force in southern Lebanon (UNIFIL) sits atop his armoured personel carrier as he monitors the border between Lebanon and Israel | File photo: AFP/Ali Dia

Israel’s UN ambassador said Wednesday that his government is demanding major changes in the way the UN peacekeeping mission in southern Lebanon operates on the ground and has support from the United States.

Ambassador Danny Danon told a video press briefing that Israel will insist that peacekeepers have access to all sites, that they have freedom of movement and that any time they are being blocked the UN Security Council must be immediately informed.

The peacekeeping mission in southern Lebanon, known as UNIFIL, was originally created to oversee the withdrawal of Israeli troops from Lebanon in 1978. The mission was expanded after a 2006 war between Israel and the Iranian-backed Hezbollah terrorist group so that peacekeepers could deploy along the Lebanon-Israel border to help Lebanese troops extend their authority into their country’s south for the first time in decades.

Israel has repeatedly accused Iranian-backed Hezbollah militants of impeding the peacekeepers from carrying out their mandate.

“We have seen that slowly there is less places that the troops in the peacekeeping operation can actually travel in southern Lebanon,” Danon said. “So we want them to have full freedom of movement.”

“I have discussed it with the commander of the force and we tell them, `You are there, you cannot move and you can’t inspect, so why you are there?,”‘ he said. “`You have to be more active, you have to move freely and you have to inspect all sites.'”

Danon said Israel knows that on many occasions UNIFIL troops haven’t been able to enter suspicious sites, “and we proved in the past that Hezbollah are digging tunnels, they are bringing weapons to the border, and only in the last few weeks we have had a few incidents on the border.”

Danon said Israel will continue pushing for reforms before the mandate for UNIFIL is renewed during the summer and will be explaining Israel’s position to council members. He said Israel is grateful for US Ambassador Kelly Craft’s strong support.

He said the United States is raising the issue of the budget “and saying very clearly if they are not effective, why are we spending so much money on the troops?”

“We are not calling to shut down the mission tomorrow morning, but we are saying if they cannot change, if they cannot function, why you are spending so much money?” Danon said. “We don’t want to send the troops back to their countries, but we want them to become more efficient.”

On Monday, the UN Security Council met to discuss the implementation of a 2004 resolution that called for the Lebanese government to extend its authority throughout the country and all Lebanese and non-Lebanese militias to disband.

UN Secretary General Antonio Guterres’ latest report said Lebanon’s government continued with those efforts but Lebanese and non-Lebanese militias continue to operate outside government control in violation of the resolution and the Taif Accords that ended the country’s 1975-90 civil war.

“Several groups across the political spectrum in Lebanon possess weapons outside government control,” the UN chief said, adding that “Hezbollah is the most heavily armed militia in the country.”

Guterres said he continues to urge Lebanon’s government and armed forces “to take all measures necessary to prohibit Hezbollah and other armed groups from acquiring weapons and building paramilitary capacity outside the authority of the state.”

He also urged countries with close ties to Hezbollah “to encourage the transformation of the group into a solely civilian political party, as well as its disarmament.”