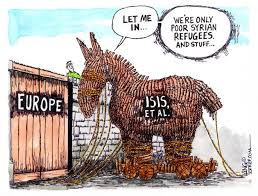 Ever wonder why there are so many Muslims and Muslim countries in the world? Over the millennia many countries were conquered, but didn’t remain Persian or Greek or Roman as the case may be. But, the countries conquered in the name of Islam, became and remained, Islamic. For example Pakistan, part of India, and Malaysia were Hindu; Turkey, Iraq, Syria, Egypt and N. Africa were Christian; Afghanistan was Buddhist. They are all Islamic now.

This transformation was not by chance but by design. All these countries were conquered by force then shorn of their wealth and many of their women. Then the Muslim conquerors introduced Sharia and continued fighting the local inhabitants. The inhabitants were either forced to convert or accorded Dhimmi status. As time went on all cultures submitted and eventually became Islamic.

The advance of Islam was finally reversed in Spain and stopped at the Gates of Vienna in 1683. Thereafter the power of Islam went into decline but other than Spain, it never lost its hold on the people it conquered.  This decline was reversed in the Twentieth Century when Arabs became wealthy as a result of their vast oil reserves. This wealth was then deployed to conquer the west,  by Violent Jihad or by Stealth Jihad.

This design was referred to as The Islamic Doctrine. It consists of Koran (14%) which stipulates that “there is no god but ALLAH and Mohammed is his messenger”, Sira, Mohammed’s biography (26%) and Hadiths, traditions, (60%). There are two different Korans combined into one, the Mecca Koran and the Medina Koran.

Mohammed started as a religious preacher in Mecca. It was during this period that the Koran 2:256 stipulated. “There is no compulsion in religion” and 109:1 stipulated “You have your religion I have mine.” Ultimately he was chased out of Mecca and migrated with his followers to Medina.

Then began the Jihad period.  From then on people were forced to convert under pain of death or were forced to live as Dhimmis (second class citizens) and pay (Jizya) for the privilege of living there.

This Jihad continued until there was no more discord.

Koran 2:193. “Fight them (Kafirs) until there is no more discord and the religion of Allah reigns absolute but if they submit, then only fight those who do wrong.”

Thus it continues until everyone in the territory has submitted to Islam, accepts Dhimmi status and pays Jizya.

Quotes from the Qur’an and Hadith on war, violence, infidels, and unbelievers may be found here.

Ayhat 8:12, “I shall cast terror into the hearts of those who are bent on denying the truth; strike, then, their necks, [O believers,] and strike off every one of their finger-tips!”

Sura 9:5,29,41. “Slay the idolators [non-Muslims] wherever ye find them, and take them captive, and besiege them, and prepare for them each ambush. Fight against such of those who have been given the Scripture as believe not in Allah nor the last Day…. Go forth, light-armed and heavy-armed, and strive with your wealth and your lives in the way of Allah! “

This inconsistency in the Koran is resolved by the doctrine of abrogation, wherein the Medina principles abrogate the Mecca principles.

Migration intends to overtake the host country through this doctrine. It is driven by Islam’s proscription against assimilation, and its will to dominate.

51% of the Koran concerns itself with the Kafir. It is a political doctrine not a religious one. There is no golden rule. Kafirs are to be subjugated. Muslims are to dominate.

“Migration is part of the doctrine of jihad. Migration is so important that the Islamic calendar is based upon the Hijra, Mohammed’s migration from Mecca to Medina. Why? Because it was migration that lead to the creation of jihad in Medina. And it was jihad that made Islam triumphant.

“In the past Muslims tended to stay in Islamic countries. Today, the new politics is to migrate to Kafir lands and immerse themselves in local politics. This is the jihad of money, writing and speech. Their politics is to bring the Sharia to Kafir culture. An example is using Islamic money is to build departments in universities that will support Sharia and never criticize Islam.“

To understand how they do it, read 4 Stages of Islamic Conquest.

Unfortunately this migration is encouraged by globalist leaders such as Chancellor Merkel and President Obama. And of course, Hillary Clinton aspires to be one of them.

Professor Belhaj explains elites “encourage migration and accommodate Islam”, and described the harmony between Muslim migrants and neoliberalism as “structural, and not accidental”.  “Migration is useful for the neo-liberal model of the borderless, minimal, global society…”

The Muslim Brotherhood met in 1991 and produced a document which set out its strategic goals for North America. The document was entered as evidence in the 2008 Holyland Terror Funding Trial. It contained among other things, the following paragraphs:

Enablement of Islam in North America, meaning: establishing an effective and a stable Islamic Movement led by the Muslim Brotherhood which adopts Muslims’ causes domestically and globally, and which works to expand the observant Muslim base, aims at unifying and directing Muslims’ efforts, presents Islam as a civilization alternative, and supports the global Islamic State wherever it is.

…the Movement must plan and struggle to obtain “the keys” and the tools of this process in carry out [sic] this grand mission as a ‘Civilization Jihadist’ responsibility.

The process of settlement is a ‘Civilization-Jihadist Process’ with all the word means.

[W]e must possess a mastery of the art of “coalitions,” the art of “absorption” and the principles of “cooperation.”

Pres Obama and Secretary Clinton, upon taking office, embraced the Muslim Brotherhood and worked with them to depose Mubarak and Assad. Luckily General al Sisi reversed their victory in Egypt and Assad, with the help of Iran and Russia, thwarted their plans in Syria.

“Members of the Muslim Brotherhood, CAIR, and MPAC have sinister goals that are not in support of the US Constitution or The Bill of Rights.  They have become a very dangerous “Fifth Column” in the United States, appointed by Obama to very high and sensitive positions in the US Government agencies.

“For nearly 8 years Obama has been filling the Washington bureaucracy including DHS, the CIA, DOD, the National Security Council, the White House, the State Department, every US Intelligence Agency, and the US Armed Forces with thousands of members of the CAIR, MPAC, the Muslim Brotherhood, and other Muslim Brotherhood front groups. “

In June of this year Donald Trump recognized the danger of Muslim migration and said, “This could be the all-time great Trojan horse.” And so it is but the US elites refuse to recognize it.

On August 15/16 he gave a speech on immigration and terrorism in which he clarified;

A Trump Administration will establish a clear principle that will govern all decisions pertaining to immigration: we should only admit into this country those who share our values and respect our people.

In the Cold War, we had an ideological screening test. The time is overdue to develop a new screening test for the threats we face today.

In addition to screening out all members or sympathizers of terrorist groups, we must also screen out any who have hostile attitudes towards our country or its principles – or who believe that Sharia law should supplant American law.

Those who do not believe in our Constitution, or who support bigotry and hatred, will not be admitted for immigration into the country.

So you can see, rather that limiting his policy to weeding out terrorists, he advocates weeding out Jihadists who want to subjugate America to Islam. This is not racism. It is common sense and self defense..

Trump has been stressing that Hillary Clinton wants to let in 550% more refugees than the 10,000 Obama let in. In response I wrote “Don’t be duped about Muslim migration to the US”  in which I pointed out that the problem is much bigger and that no distinction should be made between refugees and immigrants.

According to a report highlighted by Megyn Kelly,

According to the Report, Obama has issued over 832,000 green cards to Muslim majority countries in his first 6 years of his presidency. In addition, 482,000 Muslims overstayed their visas and are not being sent back. These Muslims support Sharia  to an astonishing degree. In Afghanistan 99%, in Iraq 91% and in Pakistan 70%. When in the US 70% vote Democrat.

And now Obama is intending to allow in another 1 million Muslims.

Jewish Americans are very supportive of allowing such numbers into the US. They argue either we have a duty to do so or that Jews should be more welcoming given the history of America banning Jewish immigration in the thirties and forties. But this analogy doesn’t hold up at all. Jews were no threat to Americans personally and to their values, whereas Muslims are both. Furthermore Muslims are very anti-Semitic and very anti-Israel. The Muslims have many other countries they could go to. The Jews had no other country willing to take them in.  Jews are, in effect, welcoming their enemies into the country.

As for a duty to allow Muslim immigration or any immigration, there is none.