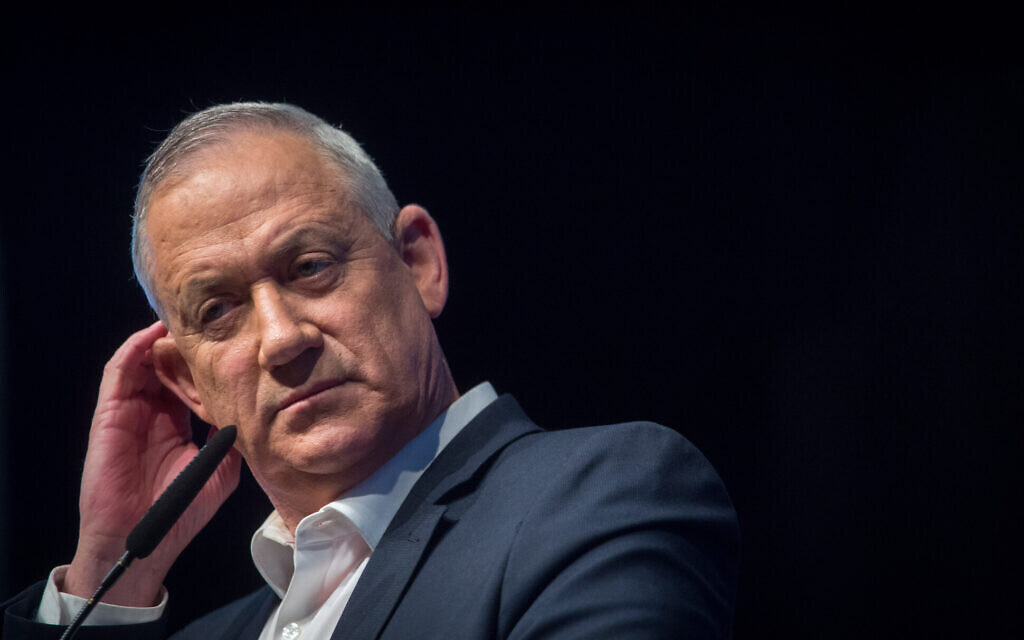 The Yisrael Beytenu party announced on Thursday that it would support a law barring Prime Minister Benjamin Netanyahu from forming the next government because he is under indictment, in a move that may well have shifted the Knesset math decisively in favor of the legislation.

“At the faction meeting that just ended, it was decided to move forward with the promotion of two laws,” the secular, right-wing party said in a statement. “The first law will limit the tenure of a prime minister to two terms. The second law will prevent an MK facing indictment from forming a government.”

It was a bombshell. A great deal divides the anti-Netanyahu coalition — on nearly every issue, Blue and White is closer to Likud than to the Arab-majority parties of the Joint List. But all are temporarily united by the specific and narrow conviction that Netanyahu’s time in power should come to a close.

As Joint List MK Ahmad Tibi said on Friday in an interview with the Kan public broadcaster, “Our bloc is not a bloc of friends marching together on a shared path.”

During an internal consultation in Yisrael Beytenu leaked to Hebrew media, Liberman reportedly described his goal thus: “One thing is clear: We won’t let Netanyahu go to a fourth election. Our goal is to establish a government as quickly as possible and to send Netanyahu to his retirement. Even Likud members of Knesset who talk to me are telling me, ‘Well done for making this move.’ They want to see Netanyahu finish his term and leave [the PM’s residence on] Balfour [Street in Jerusalem].” 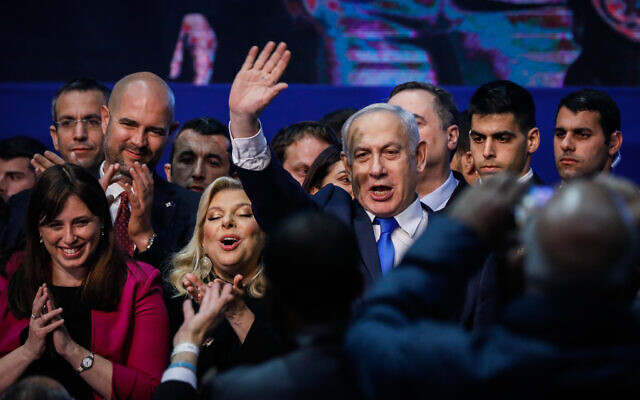 Prime Minister Benjamin Netanyahu and his wife Sara addresses their supporters on the night of the Israeli elections, at the party headquarters in Tel Aviv, on March 3, 2020. (Olivier Fitoussi/Flash90)

With Liberman pulling that trigger, Likud’s election-day celebrations suddenly imploded into the painful prospect of a very close and very sudden end to Netanyahu’s long reign.

Israel’s electoral system seems simple on paper — a nationwide single-constituency party-list system with a government voted in by a parliamentary majority. But Israel’s complex and divided society means that any majority requires the support of a broad array of subcultures and divergent political interests and identities. Negotiating one’s way through Israeli politics can lead to strange crossroads and unexpected u-turns.

Following Liberman’s announcement, Israel’s political system is now at one of those inflection points.

Some in Likud are in sack cloth and ashes over the possibility that the law would exclude Netanyahu from the premiership, and deliver victory to a once unimaginable Gantz-Liberman-Joint List coalition — not a formal declared coalition, perhaps, but a decisive majority nonetheless voting together to replace Netanyahu. 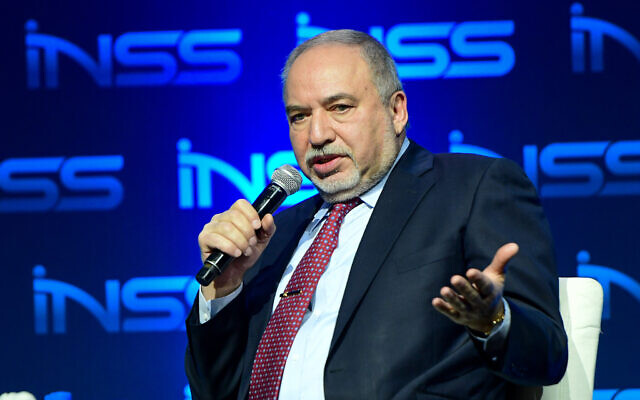 Yet not everyone in Likud is in mourning. Some are counseling patience and insisting this setback is no setback at all.

The past 11 months have taught Likud three times over that the bloc it leads cannot win a majority outright. But they have also taught Likud that support for Netanyahu from perhaps 45-48% of the electorate is stable and reliable. Let Gantz attempt to govern through his minority government, wholly reliant on keeping both the Arab parties and the right-wingers of Telem and Yisrael Beytenu all rowing in the same direction, this faction in Likud is now arguing. Let Gantz try to pass budgets, assign ministries, fight a bout with Hamas in Gaza and survive a no-confidence vote, all while satisfying the diametrically opposed agendas of his erstwhile allies.

And when he fails, when the underlying claim at the heart of Blue and White — that it is a viable and stable alternative to Likud rule — is revealed as the mirage that it is, Likud will be there, swooping in on a not-too-distant election day to reclaim the throne for another decade of unassailable political dominance.

It’s a comforting prospect for the right, and describes aptly Gantz’s main challenge going forward. And who knows? Maybe by the time Gantz falls, Netanyahu will have concluded his trial and returned unencumbered to the political battlefield.

Netanyahu, for his part, appears to be angling for a more aggressive approach. If he cannot piece together a new term as premier from Monday’s results, his goal will be to push wedge issues onto the public agenda that will force Gantz’s divided partners to bicker and posture against each other. Rocket fire from Gaza or Gantz’s pre-election promise to carry out some unspecified parts of the Trump peace plan are good places to start. 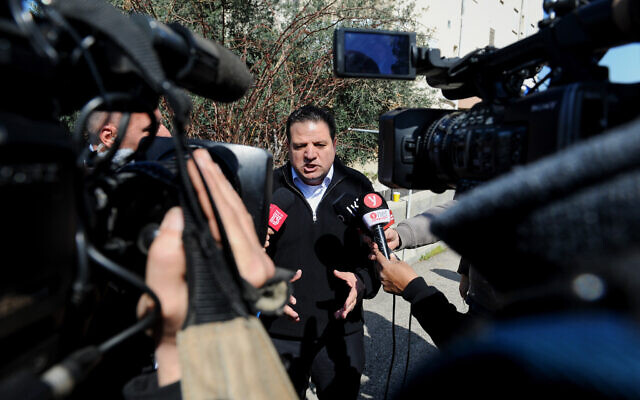 Head of the Joint List party Ayman Odeh speaks to the media outside his home in Haifa, March 3, 2020 (Meir Vaknin/Flash90)

By pushing Gantz’s coalition over the edge, Netanyahu will force new elections in which his accusation that Gantz intends to form a government “dependent on the Joint List” will sound more believable — and in which he will explicitly ask for a mandate from his supporters to reverse the law prohibiting him from becoming prime minister.

That will be his chance, facing what he hopes will be an undermined Gantz and discredited Liberman, to deliver the “knockout victory” that has eluded him since April.

So Likud now finds itself in a complex internal debate about the future, with its prospects less bleak than its bitter Thursday pronouncements might suggest.

But that internal Likud debate is not the strangest thing about this political moment. The strangest thing, perhaps, is the simple fact that Gantz’s best hope for prying the premiership out of Netanyahu’s hands may be the very thing that decisively and permanently denies Gantz his hard-fought victory.

In an important sense, Netanyahu has already done his job for his party and his political camp. He delivered 36 seats for Likud on Monday, as well as a consistent plurality for the right-religious alliance. Indeed, with that stability, the only thing keeping Likud from an easy return to the PMO — is Netanyahu himself.

Netanyahu accused his opponents during the campaign of being an “Anyone But Bibi” camp. His opponents largely agree

Netanyahu is celebrated and lionized on the right, but is also hated by a surprisingly large number of right-wing leaders for reasons more visceral and personal than any political disagreement. Liberman, Yamina’s Naftali Bennett and Ayelet Shaked, Blue and White MKs Moshe Ya’alon, Yoaz Hendel and Zvika Hauser are among the many, many right-wing politicians who agree with Netanyahu on most policy issues but have a long litany of abuses and betrayals they believe they have suffered at Netanyahu’s hands. Netanyahu has a talent for driving close allies and supporters into the camps of his enemies, and some of those former allies and aides have grown to become potent political adversaries.

Netanyahu accused his opponents during the campaign of being an “Anyone But Bibi” camp. His opponents largely agree. Liberman’s opposition to Netanyahu flows from over 20 years of mutual enmity and distrust, a great deal of it caused by Netanyahu himself. Yisrael Beytenu’s backing for legislation that would deny Netanyahu the premiership was framed by Liberman himself on Thursday as a blunt instrument meant to accomplish one thing only: to finally get rid of the long-serving premier.

But there’s the rub: Likud’s opponents are more keen on getting rid of Netanyahu than on replacing Likud as a ruling party. And that creates a surprising opportunity for the party.

Removing Netanyahu from the equation uncorks a great deal of what stands between Likud and a clear Knesset majority for its rule. A Likud now led by a Yuli Edelstein or Israel Katz or Gilad Erdan, or any other front-bench leader, would find an extremely amenable Yisrael Beytenu and an even friendlier Labor party (not to mention Blue and White’s own Telem faction of former Likudniks) eager to secure for themselves and their constituents the privileges of power now that the campaign promise to oust Netanyahu has been achieved.

Suddenly the interests of a 36-seat Likud and a single Netanyahu diverge. 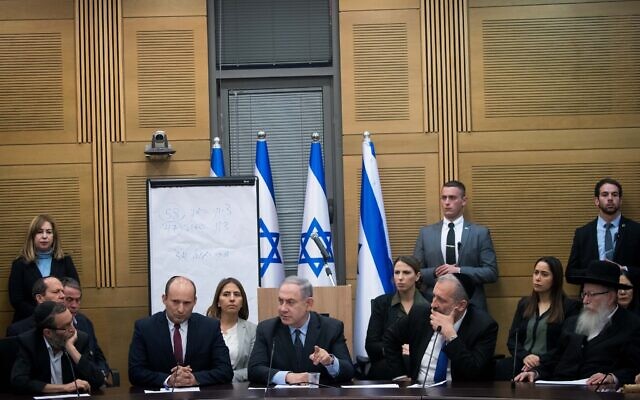 It’s important to note here that Likud will not, of its own accord, act on this interest and remove Netanyahu. He has shown, especially in Monday’s race, that his premiership has the backing of the party’s rank and file, and even of many supporters of allied parties like Shas and Yamina.

Someone from outside, like Gantz, would have to force the removal — but it is Likud that would likely enjoy much of the windfall.

Or, put another way, it is quite likely that Netanyahu’s departure makes Gantz irrelevant to the very partners he needs if he is to have any chance at winning the premiership.

It’s a bitter and ironic trap. Gantz, the architect and enabler of the end of Netanyahu’s rule, the astoundingly successful herder of the many cats that compose the Blue and White coalition, a man who rebuilt for an as-yet unknown length of time a long-dormant center-left political identity, may be rendered moot by his very success.

Even a unity government could be pushed further from his reach. Why would Likud share power with a 33-seat Gantz when it could monopolize the top posts in an arguably more stable coalition with the many newly available and much smaller partners?

Gantz is now within throwing distance of toppling Netanyahu — but needs Netanyahu as a target to maintain his own position as Netanyahu’s alternative.