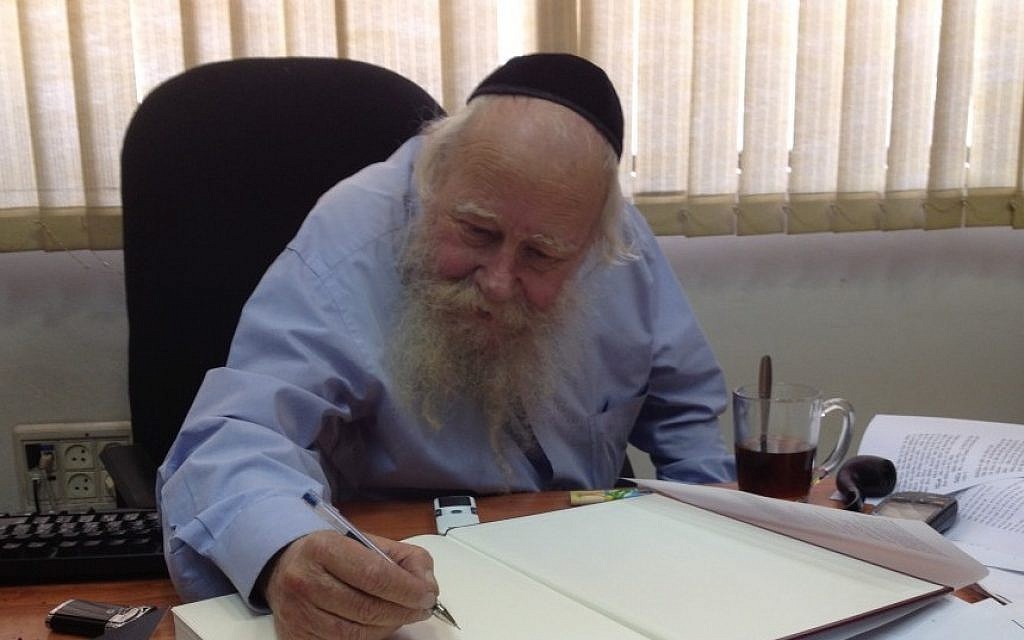 Rabbi Adin Even Yisrael Steinsaltz, whose translation and groundbreaking commentary of the entire Babylonian Talmud and Bible has been lauded for making the ancient Jewish texts approachable, died Friday at the age of 83.

A longtime educator, prolific author of over 60 books, and Israel Prize laureate, Steinsaltz (who years ago switched to a Hebraicized version of his surname, Even-Israel, but never shook off the original), was also an educated physicist and chemist, a biting social critic, and a beloved public figure in Israel — revered for his encyclopedic mind, and admired for his down-to-earth and kindly bearing. (His first name means “gentle” in Hebrew, and by all accounts, he was).

But Steinsaltz’s crowning achievement was indisputably the 45-year project of democratizing the 1,500-year-old corpus of rabbinic Jewish law — a “once-in-a-millennium” intellectual undertaking, said Time magazine in 2001. It earned him comparisons to the 11th-century French sage Rashi, whose commentary on most of the Talmud and Bible was unmatched in terms of the scope of texts it covered for 1,000 years.

Steinsaltz’s formidable effort began in 1965, when he was just 27, three years after he became Israel’s youngest-ever school principal. He completed it in 2010, when he was 72-73 years old.

“Since I started the work at a relatively young age, obviously I didn’t take into account the immense effort it requires, which includes not only the work of researching and writing, but also many logistical problems,” he told the Yedioth Ahronoth daily in 2009.

“But sometimes, when a person knows too much, it causes him to do nothing,” Steinsaltz mused, adding that “it seems it’s better, sometimes, for man, as for humanity, not to know too much about the difficulties and believe more in the possibilities.” 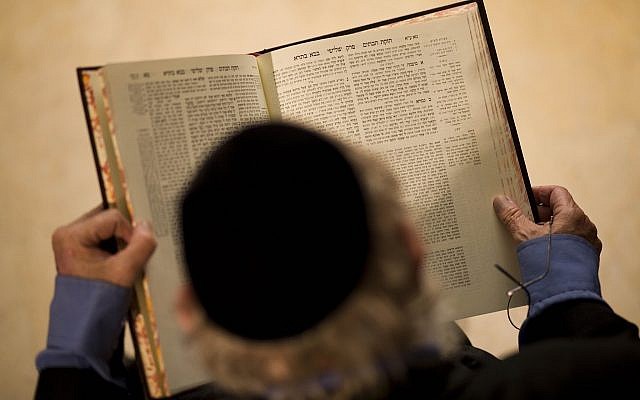 Rabbi Adin Steinsaltz holds a volume of the Talmud during an interview with The Associated Press in Jerusalem, November 10, 2010. After 45 years of 16-hour workdays, Israeli scholar Rabbi Adin Steinsaltz has finally completed his life’s work, a translation of the entire Talmud, one of Judaism’s most important texts, to make it accessible to ordinary people. (AP Photo/Bernat Armangue)

When he completed, in 2010, his 41-volume translation of the Talmud into modern Hebrew with a running commentary (which has since been translated into English), it was hailed as a revolutionary feat making the largely Aramaic, often obscure text accessible, furthering its reach and encouraging deeper study.

But like any good Jewish literary-rabbinical product worth its salt, it was not without its raging critics, its furious bans, its Talmudic-like head-shaking, finger-wagging, and nitpicking along the way.

Ultra-Orthodox Lithuanian rabbis led by the late rabbi Elazar Shach banned the series outright, citing its contents, its change of format from the traditional layout, and what was derided as a simplification of the foundational text of Jewish oral law. Still, endorsed by the US-based late rabbi Moshe Feinstein, Steinsaltz’s translation was also reportedly applauded by the Gur Hasidic sect.

Former Sephardic chief rabbi Shlomo Amar praised its capacity to “expand the borders of holiness” to encompass those not well-versed in Talmud, but fretted that its ease of use would contribute to the dying out of ancient methods of study among yeshiva students and runs counter to the edict to “toil in the study of Torah.” Steinsaltz, he and others argued, just made the infamously rigorous discipline too darn easy.

“There is no laziness like intellectual laziness,” Amar told the ultra-Orthodox Kol Berama radio station in 2009, lamenting the resorting to “easy commentaries” by yeshiva students. The Steinsaltz edition also met with some academic criticism, namely by Jacob Neusner, an American scholar at Bard College. 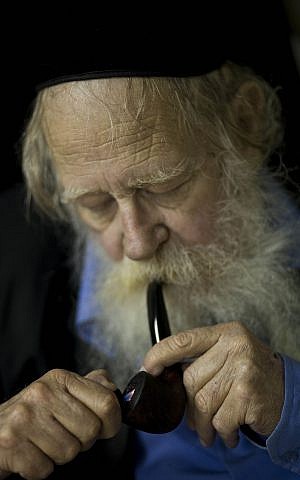 In this photo taken on Nov. 10, 2010, Rabbi Adin Steinsaltz smokes a pipe during an interview with The Associated Press in Jerusalem. The 73-year-old rabbinical scholar has just completed a monumental 45-year project hailed in Jewish scholarly circles as a breakthrough of biblical proportions, the most comprehensive translation and commentary of the Talmud, with its 63 basic sections and nearly 6,000 pages. (AP Photo/Bernat Armangue, File)

Steinsaltz’s was not the first translation of the Babylonian Talmud. But as the first into modern Hebrew, with his own phrase-by-phrase commentary appearing alongside medieval commentaries Rashi and Tosafot, it caused the greatest stir.

In interviews, Steinsaltz countered that much of the Haredi criticism stemmed from opposition among the ultra-Orthodox to the Chabad-Lubavitch community with which he is affiliated, rather than to his work. Traditional study of Talmud, he insisted, is bogged down by technical details that keep students from plumbing its depths.

“My translation not only doesn’t reduce the Gemara, but rather in a certain sense it allows for greater in-depth [study] and advancement,” he told Yedioth over a decade ago. “In the end, my explanations primarily try to resolve the technical problems: The language difficulties, the associative problems, the problems that stem from the fact that the Talmud is not an organized text with a gradual build-up… unfortunately, many times the traditional [method of] study dedicates so much time to overcoming the technical problems that in practice, there is not much time left for in-depth and innovative [study].”

In 2016, the logophile who expertly dotted the 2.5 million unpunctuated Hebrew and Aramaic words in the 6,000 pages of the Babylonian Talmud lost his capacity to speak after suffering a stroke, his son told the Makor Rishon newspaper in 2018.

He continued to work, proofreading and marking up his previous work, while silently signaling to his son to convey his edits.

Steinsaltz is survived by his wife, three children, and numerous grandchildren. 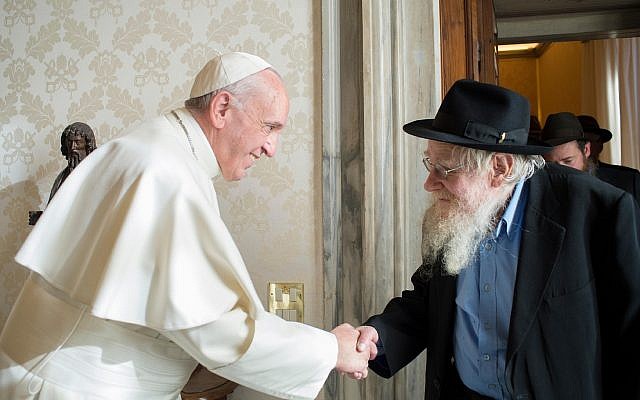 ‘The Talmud is a book of sanity’

Born in Jerusalem in 1937 to a secular communist family, Steinsaltz was raised in the Katamon neighborhood, not far from his contemporaries, Israeli authors Amos Oz and A.B. Yehoshua. Though his father was not interested in religion, he sought out a tutor to teach the young Steinsaltz the Talmud, insisting — the rabbi has recalled in slightly different formulations over the years — that while he was free to be a nonbeliever, “no family member of mine will be an am haaretz [ignoramus].”

After choosing to attend a religious high school, Steinsaltz adopted Orthodox Jewish observance and later became a dedicated follower of the leader of the Chabad-Lubavitch movement, rabbi Menachem Mendel Schneerson.

In the merging of his quintessentially Zionist upbringing in pre-state Israel with his love for the Talmud, Steinsaltz discovered a language of caustic debate and lucid reasoning that he hoped would someday be integrated into Israeli culture.

“The Talmud is the book of sanity. And when you study it, it confers a certain amount of sanity,” he told The Times of Israel in 2012, suggesting that the most fanatical rabbis are rarely great Talmudists. After all, the Gemara consists mainly of logical and rational back-and-forth discussions about legal issues, aimed at arriving at a factual truth, he pointed out. What could be more sane than that? 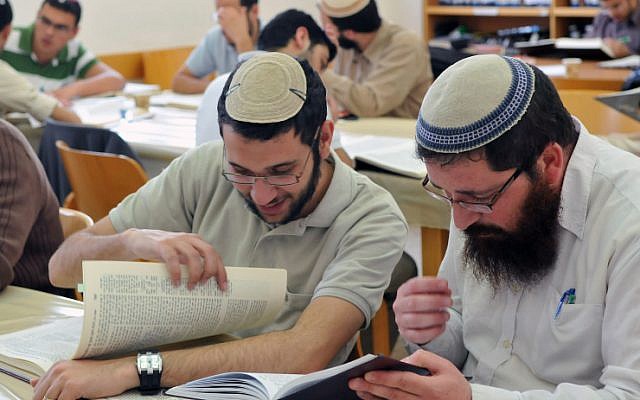 “It was a big mistake to make the education in Israel based so much on the Bible,” Steinsaltz said. “Because the Bible was written by prophets. If you read the Bible, you somehow become in your mind a little prophet. That’s the way in which Israelis speak to each other — they don’t have conversations, they all have complete and unlimited knowledge. Learning Talmud would bring a big change to the Israeli mind, because it deals with and is connected to dialectic.”

The founder of a network of yeshivas in Israel and the former Soviet Union, Steinsaltz was also active in outreach to Jews beyond the Iron Curtain. In 1989, when he founded a yeshiva in Moscow, it became the first state-sanctioned institution of Jewish study in the city in 60 years, according to the Jewish Telegraphic Agency.

From 2004, he also served as the head of a nascent right-wing Israeli movement to revive the Sanhedrin, or supreme religious tribunal, though he resigned in 2008.

In his later years — even as his books were translated into numerous languages, selling millions of copies worldwide, and as he wrapped up his Bible commentary — Steinsaltz was still daunted by the work that remained unfinished.

In one of his final interviews in 2016 to the Ben Gurion University periodical “Israelis,” he mused: “I never thought about what will be written on my tombstone, it doesn’t really preoccupy me. But I am concerned by what will be remembered. I did something, but I didn’t do enough, I didn’t even do a fraction of the things I wanted to do. I wrote such-and-such books — very nice. I gave such-and-such lectures — very nice. I wrote articles like sand on the seashore; it’s not enough. What would I have wanted to do? I would want to leave [behind] a small tree that will grow.”

“I will tell you a final story,” he continued. “In my garden, years ago, I planted two cypress trees. One was stolen, and the other was a small cypress whose head was shorn off. I simply had mercy on it, I took its head and taped it to the still-fresh trunk. I didn’t do anything else. I let it grow, I hoped the fissure would heal. Today, that cypress is almost three meters tall, a mighty tree! That’s what I would have wanted to have done, to plant a small cypress, even one that was chopped, that will grow into a large tree.”

Raphael Ahren contributed to this report.