T. Belman.  This tug of war between banning hate speech and allowing free speech need not dictate either option.  Rather than argue its one or the other, both can be upheld.  The market place of ideas as the ring in which ideas are pitted against one another is appropriate in a utopian world but doesn’t suffice in a world beset with propaganda, financed by billionaires, countries and well financed hostile ideologies.

I see nothing wrong in removing from that market place such clearly odious things as Mein Kampf.  It is imperative that societies protect their core values rather than to put everything up for grabs.  Democracy is not a suicide pact.  Lofty priniples are important but they must give way to survival.

The retailer is trying to do two contradictory things: Ban hate literature but allow free speech. 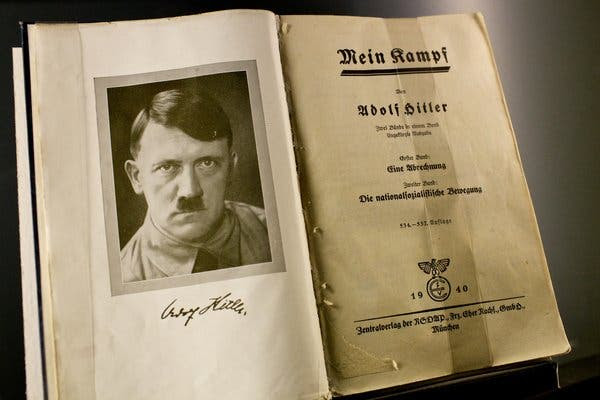 The retailer, which controls the majority of the book market in the United States, is caught between two demands that cannot be reconciled. Amazon is under pressure to keep hate literature off its vast platform at a moment when extremist impulses seem on the rise. But the company does not want to be seen as the arbiter of what people are allowed to read, which is traditionally the hallmark of repressive regimes.

Booksellers that sell on Amazon say the retailer has no coherent philosophy about what it decides to prohibit, and seems largely guided by public complaints. Over the last 18 months, it has dropped books by Nazis, the Nation of Islam and the American neo-Nazis David Duke and George Lincoln Rockwell. But it has also allowed many equally offensive books to continue to be sold.

An Amazon spokeswoman said in a statement on Tuesday that the platform provides “customers with access to a variety of viewpoints” and noted that “all retailers make decisions about what selection they choose to offer.”

“Mein Kampf” was first issued in Germany in 1925 and is the foundational text of Nazism. The Houghton Mifflin edition of “Mein Kampf,” continuously available in the United States since 1943, was dropped by Amazon on Friday.

“We cannot offer this book for sale,” the retailer told booksellers that had been selling the title, according to emails reviewed by The New York Times.

After disappearing for a few days, “Mein Kampf” is once again being sold directly by Amazon. But secondhand copies and those from third-party merchants appear to be still prohibited, a distinction that sellers said made no sense.

But on Amazon’s subsidiary AbeBooks, which operates largely independently, hundreds of new and used copies of “Mein Kampf” are available.

“It’s ridiculous how the greatest e-commerce company in the world has such lousy control of their platforms,” said Scott Brown, a California bookseller who sells on Amazon. “They somehow can’t prevent price gouging and they can’t prevent people from selling counterfeit goods and they can’t manage to — or don’t want to — effectively implement a Nazi ban.”

For years, Amazon took the attitude that it would sell even the most objectionable books. Nazi books garnered a following and accumulated good reviews. That led to increased sales and prominence on the platform, which in turn prompted increasing demands from Holocaust memorial associations and other groups that the books be dropped.

Amazon has also been under pressure for how it depicts Nazis. In February, the Auschwitz-Birkenau Memorial and Museum criticized “Hunters,” an Amazon series showing a deadly human chess game at a concentration camp. The memorial said the fictional scene “welcomes future deniers.” The creator of the drama, David Weil, responded that he employed fiction because he did not want to trivialize reality.

Amazon also prohibited last week all editions of “The International Jew,” the anti-Semitic propaganda published by the automaker Henry Ford in the early 1920s, as well as editions of “The Protocols of the Elders of Zion,” the notorious fabrication from the early 20th century describing a plan for Jewish domination.

Karen Pollock of the Holocaust Educational Trust, a group that works with students, school and communities in Britain, said Amazon should go further. She welcomed the dropping of “Mein Kampf” but tweeted that “surely @AmazonUK should also remove books by Himmler, Goebbels and Rosenberg too?”

On an Amazon sellers forum devoted to the topic, quite a few merchants expressed queasiness about the retailer’s latest actions.

“When companies decide what you can and can’t read,” wrote one, “the population is in for real trouble.”

Another said the wrong books were being dropped.

“What I’d really like to see them ban are the books that are really hurting people, like ‘Stop seeing your doctor and cure your cancer the NATURAL way.’ ”

Perhaps it was the attention, or perhaps “Mein Kampf” is something people want to read as they hunker down around the country, but its sales rank on Amazon rose to 3,115 on Tuesday from about 50,000 a few weeks ago.