One of the foremost authorities on Arabs in Israel, Professor Raphael Israeli, debunks claims that the extremist, anti-Zionist Arab leadership doesn’t actually represent the views of their constituency. 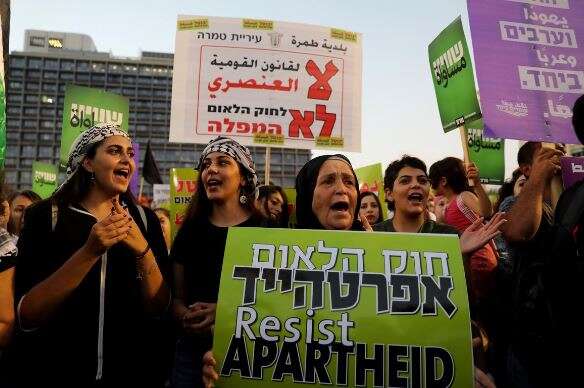 Arab Israelis and their supporters take part in a rally to protest against the nation-state law in Tel Aviv, Aug. 11, 2018 | Photo: Reuters/Ammar Awad

Middle East scholar Professor Raphael Israeli, 84, one of the preeminent researchers on the Arabs of Israel, recently returned to Israel from a research trip abroad and went straight into coronavirus quarantine. But he is much more bothered by the political debate over how Arab Israelis will be represented politically. In contrast to widely publicized claims, Israeli sees a “clear trend of disconnect, not any desire to integrate into Israeli society” among Arabs.

He has been following the Arabs of Israel for nearly 60 years and knows them well. Over the years, the professor emeritus of Islamic, Middle East, and Chinese studies at the Hebrew University of Jerusalem and the University of Haifa has published dozens of books and studies on the Arab Israeli population. He has also represented the government on various committees and even taken part in countless discussions with them.

But now he is squarely against the possibility of any Zionist party depending – actively or passively – on the Joint Arab List in order to form a government. He sees what is occurring in Arab Israeli politics as “a serious decline,” and finds it difficult to understand why others can’t see what he sees: “Not increasing closeness at all, but rather Arab Israelis pulling away from Israeli-ness.”

On the other hand, Israeli talks with admiration about the possibility of an Arab Israeli who does not identify with the positions of the Joint Arab List being appointed to a ministerial post in an emergency government – if one is established – and taking part in the battle against the coronavirus and other fields.

He even has a specific suggestion: “Issawi Frej, the former Meretz MK, and there are other possibilities. It could be a unique step toward goodwill,” he said while warning against a “normative precedent.”

Israeli thinks that Israeli Arabs should find themselves new representation in the form of a party that does not undermine the Jewish state, or in the existing parties — both on the Left or Right.

Q: On one hand, the Arab parties that joined together in the Joint Arab List are barred from being part of the coalition. On the other, they are said to not truly represent the Arabs of Israel, who vote for them over and over.

“The answer lies in your question. That same Arab public, who is supposedly not represented by the Arab leadership, votes for them again and again. This is the best proof that this discrepancy is artificial.”

Q: Why don’t Arab Israelis produce a leadership with a more civil agenda, that would put issues like infrastructure, services, crime, and illegal weapons at the top of its agenda, rather than emphasizing identification with terrorism and martyrs, or actively undermining Israel as a Jewish state?

“I know a lot who long for a change like that, but a change of that kind would be based on the assumption that there is a major difference between what the Arab Israeli citizens – who are defined as moderate – and what the Arabs MKs and the radical parties want. I’d like to believe that, too. Once I even did, mistakenly, but what can you do about the fact that these parties simply represent their voters, who elect them time and again?”

“Until a year ago, it might have been theoretically possible to assume that half of the Arab population opposed that extremism, but the spike in Arab voter turnout for the Joint Arab List in the last two elections shows that the public and the party are one.”

Q: Is it possible that the path to moderation lies with integrating them into the government in high-ranking positions?

“Let’s put our cards on the table: They say that Arab Israelis, who are 20% of the population, want to integrate, but they vote for a confederation of parties that define Israel as a state that commits theft and robbery. Arab MKs, including a few who are currently in the Knesset, supported the “Vision Document” for the Arabs of Israel back in 2006-7, and have never gone back on their support. People have forgotten, but these documents, whose representatives justify the right of return for Arabs even now, reject the idea of Arab Israeli identity and cling to the idea of the Palestinian people and the Arab nation.

“For them, Zionism is colonialism. Hanin Zoabi and Ayman Odeh have adopted this agenda, or something similar to it. Many more who identify with the parties that now make up the Joint Arab List embrace that same agenda. There is no process of moderation, only radicalization. The Joint Arab List is [a group of] isolationist parties that emphasize their Palestinian-hood rather than their Israeli-hood.”

No IDF, no citizenship

Israeli goes on to explain that “the vast majority of the … Jewish population in the country are Zionist Jews, and for that majority, the three foundations of the Zionist state are aliyah, settlement, and security. These three foundations are rejected by the Arabs, so how exactly do they want to integrate? They are willing to vote in the Knesset so the state will approve budgets for more policing in their communities in the face of the raging crime there, and that’s fine. That’s acceptable. But they won’t vote to acquire a tank for the purpose of defending their country because they don’t exactly see Israel as their country. I’m saying this with regret and disappointment, and definitely not rejoicing. At any rate – this ‘distinction’ between the citizens and their politicians doesn’t really exist.”

Q: A poll by the Israel Democracy Institute showed that 83% of Israeli Arabs want to integrate into Israeli society.

Q: What do you expect from an Arab in a high position, such as a Supreme Court judge. Do you expect him or her to sing “HaTikva,” about the Jewish soul?

“Someone like Frej, he’s not a Zionist. He’s a moderate person who is willing to co-exist. I would make him part of the government, but how can someone who demands that the Law of Return or The Law: Israel as the Nation-State of the Jewish People to be revoked, or demands that the right veto operations in Gaza, be part of the government or what holds the government up? Only suicidal crazy people would extend their hand to anyone who undermines the foundations of their state.

“I know that what I’m saying can sound harsh, but I’m laying it all out because there aren’t too many who will say it. There are a lot of Muslims living in England. Pakistanis and Indian [Muslims] live in London, but the Pakistani who was elected mayor of London [Sadiq Khan] wasn’t elected as leader of a Pakistani nationalist party. He joined Labour, and that was how he rose, like Ghaleb Majadle from Bakr al-Gharbiyya did here, even becoming a Labor Party minister.”

Q: And now everyone is the same? There is no Majadle?

“To a large extent. There are always exceptions, but only a few.”

Q:  Arab Israelis suffer from huge discrepancies in the level of infrastructure and services and budgets their communities receive. They explain that they need to join forces to make progress for their own population.

“They are right in terms of the facts. The discrepancies are enormous. There are roles that are blocked to them, but they can’t have it both ways – voting over and over for MKs and parties that reject the existence of Israel as the Jewish state but at the same time expect to be treated like any other citizen.

“They don’t want a Zionist state with a Jewish majority? Let them be residents, and not citizens. They speak openly and don’t hide their desire to eliminate the Jewish majority in Israel. Would the Left, which never stops talking about the endangered ‘Jewish majority,’ agree to that? Would [Moshe] Bogie Ya’alon – whom I know personally, and who is someone I admired very much and has spent a lot of time in my home, a right-winger who now sees fit to depend on [Arab Israeli] support – agree to that?”

Q: The ultra-Orthodox aren’t satisfied with Israel as it exists, either. They too – or most of them – don’t serve in the IDF. Some even define themselves as anti-Zionist.

“You might be surprised. In my opinion, anyone who doesn’t serve in the military should be a resident and not a citizen, no matter whether we’re talking about a haredi Jew or an Arab Israeli. Anyone for whom it is important to live in Israel but to whom the state of Israel is not important should pay a price. That’s the line that differentiates the Arabs who vote for the Joint Arab List and those who vote for other parties.”

Expectations for a strong leader

Israeli points out that this time, the Joint Arab List included a female representative from the Southern Branch of the Islamic Movement, MK Iman Khatib-Yassin.

“Yassin is an educated woman who has been involved in positive community activity, but the movement she now represents in the Knesset wants – just like the Northern Branch, which was outlawed – to create an Islamist identity here.

“On principle, the Northern Branch [of the Islamic Movement]   rejects any integration into Israeli institutions. The Southern Branch takes the opposite approach, but it isn’t willing to run as an independent party. So it integrated into the Joint Arab List. Like the Northern Branch, it includes people who dream of a global Islamic caliphate, but they won’t talk about that openly.”

Q: Maybe you’re wrong? Even they talk about integrating into Israeli society, and government officials publish statistics that show a process of integration.

“The question is, ‘What does integration mean?’ If we’re talking about economic integration, then yes  –  they are more involved. They own businesses, they trade with us and we trade with them, but unfortunately, their national attitude is to not integrate into the State of Israel. Nationally, they are gathering around an extremist leadership. Past talk about the birth of a different kind of leadership has not come to pass.

“When I talk to them about it, and I have done so extensively, I find a few who are willing to whisper different things in terms of nationality, but it’s always a whisper. I’m waiting for a brave Arab leader who will say different things to his people. Right now, the way I understand it, the  Arab Israeli political leadership is pulling its public away from Israel, and the public is following.”