The National Council of Canadian Muslims (NCCM) was originally named CAIR-CAN, that is, the Council on American-Islamic Relations in Canada. Its record can be seen HERE.

The NCCM advises the Trudeau Liberal Government of Canada on issues of “racism” and “Islamophobia,” including on matters related to a 23-million-dollar followup plan to the anti-Islamophobia M-103. The plan stipulates that Canadians will be “monitored for compliance,” and that law enforcement will be trained to investigate online and offline “hate.”

The NCCM also sent a formal letter to the Trudeau government complaining about my writings for Jihad Watch while I was an appointee to the Canadian Race Relations Foundation. I was subsequently fired.

The National Council of Canadian Muslims also expressed concerns and sent a formal letter to the government in October. Executive director Ihsaan Gardee said Douglass-Williams’ removal is an “appropriate corrective measure taken by government to address (her) disturbing public record.”

The NCCM’s original definition of “Islamophobia” as a guide to the Toronto District School board was as follows:

“Fear, prejudice, hatred or dislike directed against Islam or Muslims, or towards Islamic politics or culture.”

Now the NCCM is back in the news over a question posed by its current Executive Director, Mustafa Farooq, who works tirelessly in the “anti-racism” industry. His question:

How are we Muslims going to recreate Cordoba [Caliphate/ Islamic State] in Edmonton/Toronto/Montreal/any Canadian city? We have a massive task ahead of us, but I really believe that it is one at which we can succeed, one in which we erase these artificial “nation-state” identities, and move together to pursue Jannah [paradise].

This shows what the NCCM has been about all along. 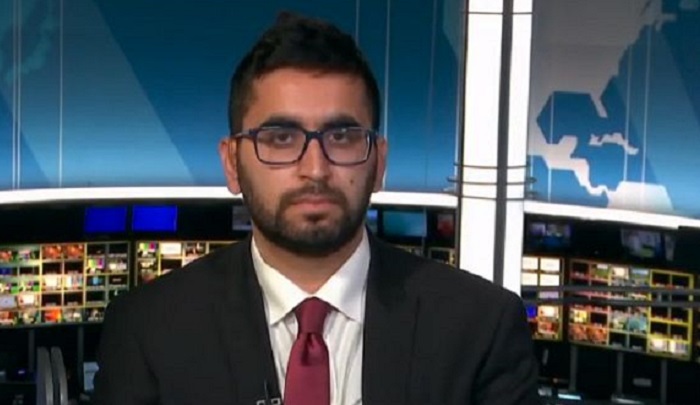 “NCCM’s Mustafa Farooq: ‘How are we Muslims going to recreate Cordoba [Caliphate] in any Canadian city?,’” by Rachel Ehrenfeld, American Center for Democracy, July 8, 2020:

Mustafa Farooq is Executive Director of the National Council of Canadian Muslims (NCCM). A lawyer by profession, Mustafa completed his Juris Doctor at the University of Alberta and Osgoode Hall (York University) and later earned his Master of Laws (LLM) at UC Berkeley in California.

How are we Muslims going to recreate Cordoba [Caliphate/ Islamic State] in Edmonton/Toronto/Montreal/any Canadian city? We have a massive task ahead of us, but I really believe that it is one at which we can succeed, one in which we erase these artificial “nation-state” identities, and move together to pursue Jannah [paradise].

To those who were at the conference, I thought that this might be an interesting tidbit. On Saturday, as I’m sure you remember, there was a concert from Maestro Ismayil Hajiyev, composer and national artist of Azerbaijan. Interestingly, though, the concert was done in honor of the late scholar Aida Imanguliyeva.

Dr. Imanguliyeva was, in her time, proclaimed as the first women Orientalist (http://en.trend.az/news/official/chronicle/1556785.html). She was the director of her branch of Oriental studies. Dr. Aida was also hailed as a prominent “arabist”.

I find it ironic how in a conference about the “Canadian Muslim Identity”, that the work of an Orientalist is celebrated and honored. While I happen to know that the organizers were unaware of who Dr. Aida was, I think it speaks volumes about how deeply our discourses have been influenced by Orientalist thought.

Shan von Pirzada – You think that our discussion at the MY Canada project was influenced by orientalist thought? How so?

Mustafa Farooq – Sorry for the late reply (ie, 1 month later). Been busy, then sick. All right, I’m not saying that the discussion at MY Canada project was influenced by Orientalist thought, only that the banquet concert was done in honor of one.

To me, it speaks to a much deeper problem, of how far Orientalism has penetrated Muslim discourses in general. That was just what I was trying to bring up.

To be more precise, Orientalism, to paraphrase the late Edward Said, pan-Arabo/pan-Islamo bias as the predominant discourse. It presents a sort of artificial divide between the West (called the Occident) and the East (The Oriental). Orientalism as a movement has been around for quite a long time, but really picked up strength in the 19th century. Prominent orientalists would include people like Lord Balfour (Balfour Declaration, Palestine Issue), Bernard Lewis, and perhaps Glen Beck (actually, not Glen Beck. After all, Orientalism is supposedly scholarly in origins, and I’m not sure if Beck fits into that).

Unfortunately, Orientalism has also become the lens by which many Muslims view themselves. We have been, in a sense, “written out of history”, with Muslims lacking a coherent sense of self or self-history. Obviously, history is a contested subject. However, I can say about myself that after the death of the Prophet (peace be upon him) I can tell you almost nothing about “Muslim history”. It is interesting that while today our fanatics rage about the battles between the West and the supposed Muslim world, at one time the “West” was Morocco….