From Waze to cancer-busting nano-ghost cells and 3-D printed hearts, The Times of Israel takes a dive into tech that helps us get where we’re going and keeps us safe and healthy 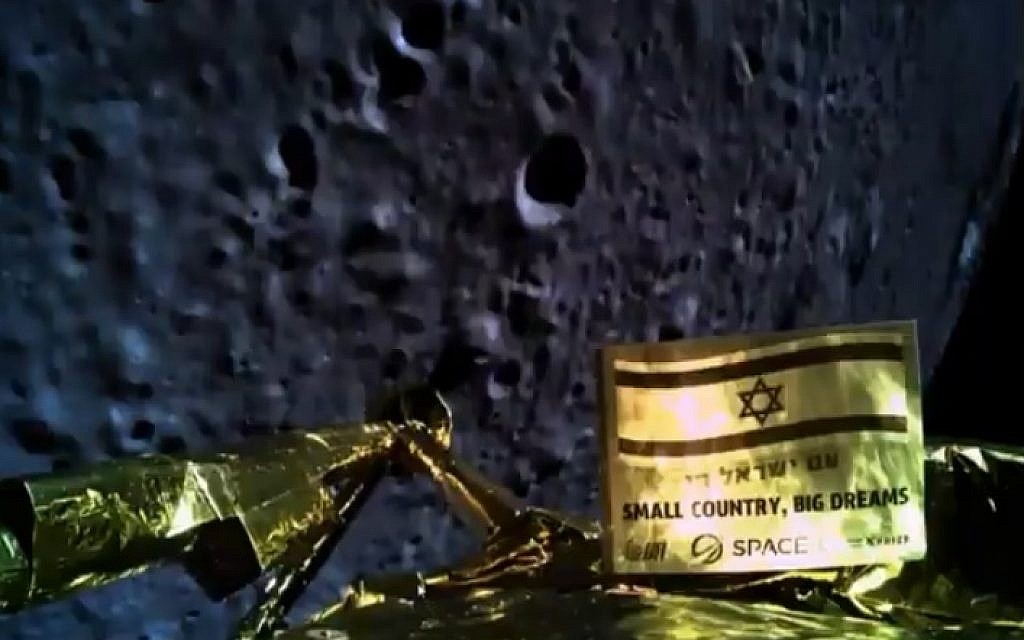 The Beresheet selfie during landing, April 11, 2019. (YouTube screenshot)< As we enter 2020, The Times of Israel has taken a look at some of the coolest Israeli technologies and inventions of the past 10 years — those that are already hugely impacting the way we live and those that have the potential of changing our lives and health. The list is of course purely subjective, and there are so many other Israeli technologies and startups out there that are making a difference to our world.

Driving with your personal navigator: Waze

This GPS navigation software works on smartphones or car screens, providing turn-by-turn information to drivers about how best to get to their destination, including estimated length of travel and time of arrival.

The software has revolutionized how people drive: like old-school GPS systems, it does away with printed maps and recalculates if you make a mistake, but this unflappable piece of software also smoothly updates its instructions based on real-time conditions and bases its advice partly on user input relating to traffic jams and other road pitfalls. 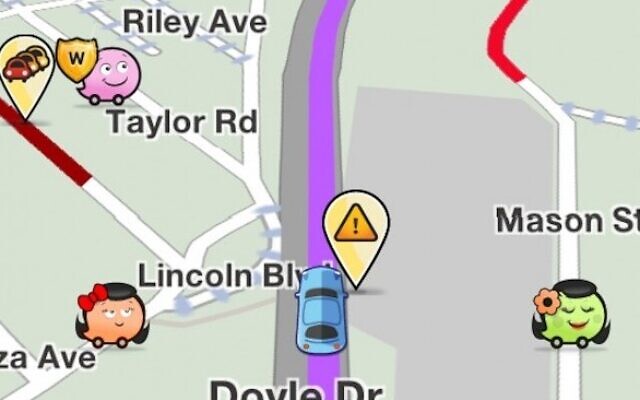 The technology was developed by Israeli founders Ehud Shabtai, Amir Shinar and Uri Levine and was snapped up by US tech giant Google in 2013 for some $1 billion.

This smartphone app allows users to find the best way to their destination using public transportation, and the Israeli startup by the same name this summer hit a milestone of over half a billion users around the world. Moovit, founded in 2012 by entrepreneurs Nir Erez, Roy Bick, and Yaron Evron and headquartered in Ness Ziona, has been referred to as the “Waze for public transportation.” 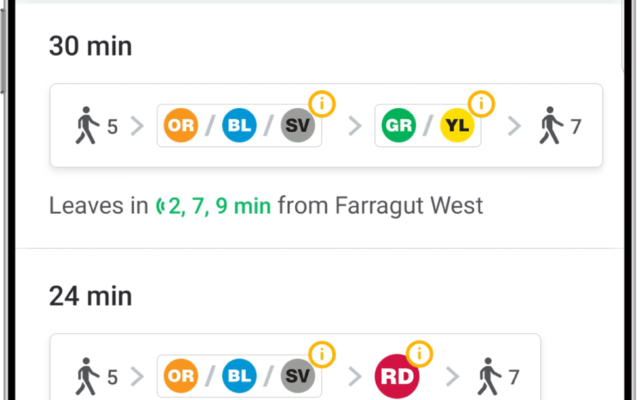 The Moovit app in use in Washington, US (Courtesy)

The free crowdsourced app provides real-time bus, train, subway, and light rail schedules, offers route options to help users find the quickest, most efficient way to their destinations, and issues exact instructions on how to get there.

The firm has raised some $131.5 million to date from investors including Intel Capital, the investment arm of Intel Corp., Sequoia Capital Israel, BMW i Ventures, and NGP Capital, a VC firm based in Palo Alto, California.

This startup creates drinking water by capturing the humidity from the air. It was set up in 2010 by Arye Kohavi, a former combat reconnaissance company commander in the Israel Defense Forces. 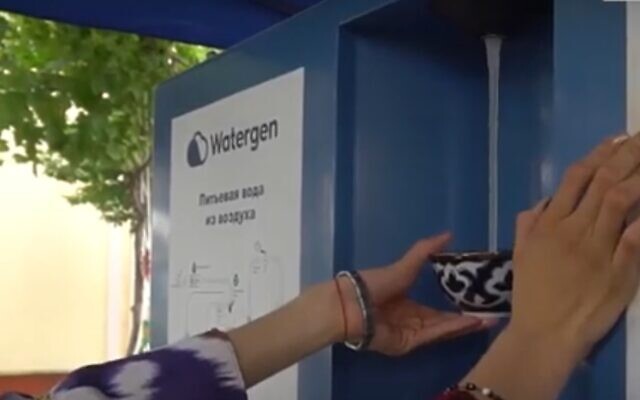 Drawing water from a Watergen generator in Bukhara, Uzbekistan. (Screenshot/YouTube )

The water-making machine uses a series of filters to purify the air. After the air is sucked in and chilled to extract its humidity, the water that forms is treated and transformed into clean drinking water. The technology uses a plastic heat exchanger rather than an aluminum one, which helps reduce costs; it also includes proprietary software that operates the devices.

Did we get all of the cancer out? Dune Medical Devices

The startup developed the MarginProbe device to help surgeons find out, on the spot, if they have removed all of the cancerous tissue or not, thus helping women with breast cancer avoid undergoing dreaded follow-up surgery to remove residual cancer cells after a tumor is excised. The device has shown to reduce re-excisions in breast conserving surgery by over 50%, and has been used in over 20,000 procedures in hospitals in the US and in Israel, according to the firm. 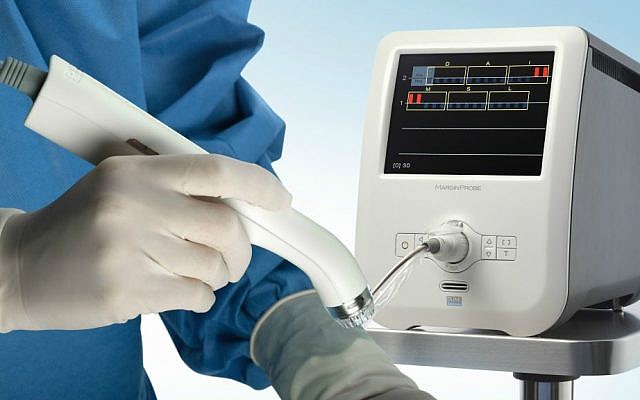 The startup was founded in 2002 by Dr. Dan Hashimshony.

Shooting rockets out of the sky: The Iron Dome missile system

The Iron Dome is an air defense system developed by Rafael Advanced Defense Systems and Israel Aerospace Industries. Using advanced radar and software, this device, which predicts an incoming rocket’s trajectory and shoots it out of the sky, has helped save lives in Israel during rocket attacks from the Gaza Strip. The system was initially deployed in 2011 near Beersheba, where it successfully intercepted its first rocket. Brigadier General Danny Gold and Chanoch Levine were behind the development of the system. 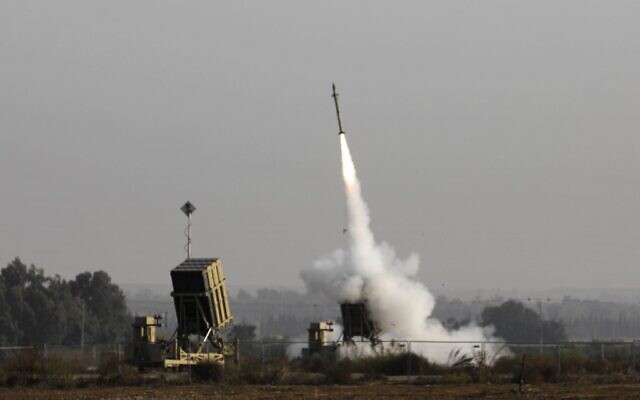 Helping those with paralysis to walk: ReWalk Robotics

This Israeli firm has developed the ReWalk “exoskeleton system” that enables people who are paralyzed to walk by letting computers and motion sensors do all of the “heavy lifting” of the body. The system controls movement using subtle changes in center of gravity, mimics natural gait and provides a functional walking speed, enabling people who are paralyzed to stand up straight again, walk down the aisle with their loved one and even run marathons. 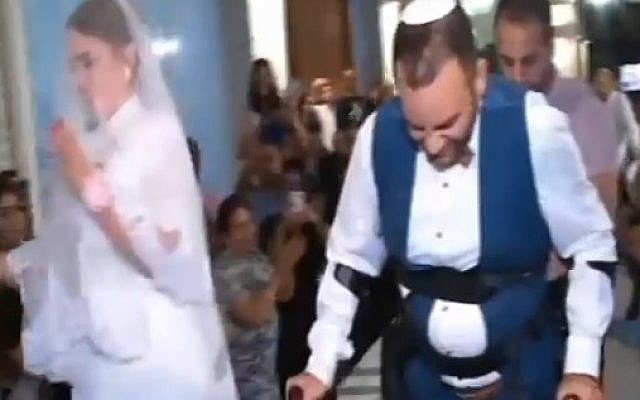 With the help of ReWalk Robotics, Dudu Shevy is able to walk down the aisle (screen capture: Channel 2)

ReWalk Robotics is a Nasdaq-traded Israeli company. The inventor of the system, Amit Goffer, is a mechanical engineer who became paralyzed from his upper back down after an accident.

This Israeli startup develops products based on advanced computerized visual interpretation capabilities. The firm’s artificial vision wireless product is basically a miniature camera attached to a computing device, less than an ounce in weight and the size of a finger, with a personal speaker on the other end. 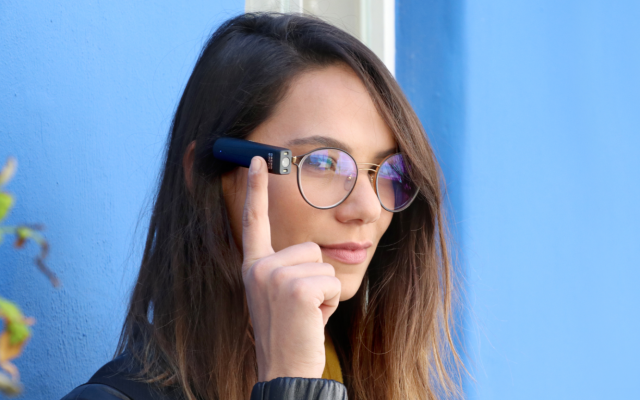 OrCam’s MyEye 2 can recognize text from any surface (Courtesy)

When the OrCam camera is attached to the frame of a pair of glasses, users can point to text on any surface, and the speaker transforms the image into words and reads them out. That way, users can “read” newspapers, restaurant menus, or books — even ballot slips. The AI-driven software uses the high-resolution video camera and smart algorithms that analyze what the camera is seeing, and reads back the information to a user in real time.

Ziv Aviram, the CEO and co-founder of the Jerusalem-based startup, set up the firm in 2010 together with Prof. Amnon Shashua. The two entrepreneurs are also the founders of Mobileye, a maker of self-driving car technologies, acquired in 2017 by Intel Corp. for a massive $15.3 billion.

Have a heart: The 3D-printed heart

Scientists at Tel Aviv University unveiled a 3D print of a heart with human tissue and vessels earlier this year, calling it a “major medical breakthrough” that advances possibilities for transplants. 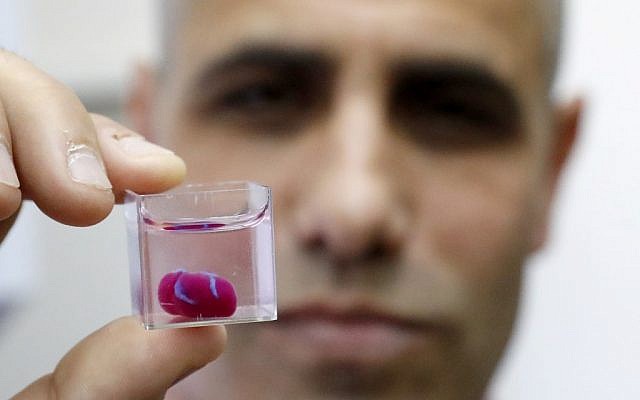 While it still remains a far way off, the scientists hope one day to be able to produce hearts suitable for transplant into humans as well as patches to regenerate defective hearts.

NanoGhost is a startup set up by Prof. Marcelle Machluf that aims to shrink the deadliest forms of cancer by precisely targeting tumors. Machluf developed the technology in her lab at the Technion-Israel Institute of Technology, and she has now set up a startup as a spin-off from the university to commercialize the technology. The startup got funding earlier this month from the aMoon venture capital fund.

In their work, Machluf and her team at the Technion used mesenchymal stem cells — cells, found in all humans, that play multiple roles in the body, differentiating into a variety of cell types. These cells help cancerous cells hide from the immune system, allowing the cancers to thrive and grow to a size that makes it impossible for the immune system to later attack. 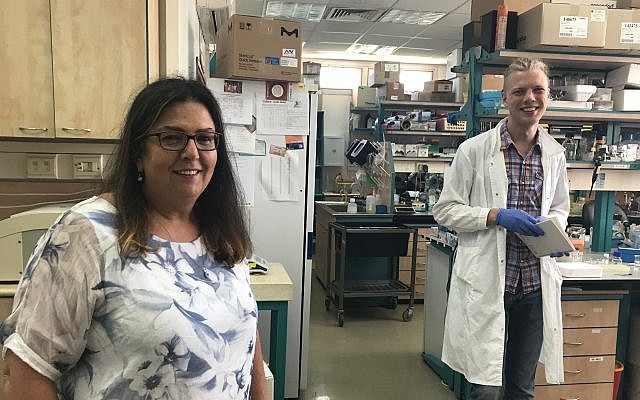 The Technion’s Prof. Marcelle Machluf, left, at her lab in Haifa with a lab assistant; June 19, 2019 (Shoshanna Solomon/Times of Israel)

Machluf’s team took these cells and emptied them of their content — creating “ghost-like” cells — and then reconstructed them into nano-vehicles filled with anti-cancer drugs. These are then injected into the bloodstream and released directly into the tumors. Animal experiments have shown that NanoGhosts may reduce tumor size in small lung carcinoma, prostate, and pancreatic cancer tumors by as much as 85%, the company said.

And what does your gut say? DayTwo

The DayTwo startup has developed an app that provides customized nutrition recommendations based on an analysis of gut bacteria, with the aim of helping diabetes patients find the best foods for them to avoid sugar spikes.

Users of the service get a home kit through which they send a sample of their stool by courier to a lab, where their gut bacteria’s genetic profile is analyzed. Patients also fill out a medical questionnaire and provide blood test results. They then get a personalized diet with recommendations for menus that best suit their gut. 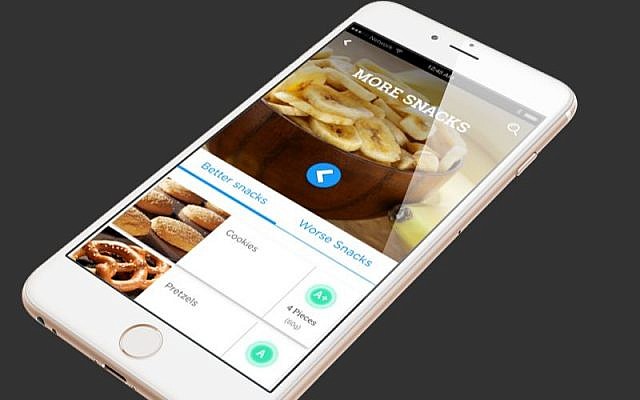 An illustration of the DayTwo app in action (Courtesy)

The company’s technology is based on research developed at the Weizmann Institute of Science. The researchers genetically sequenced the DNA of all of the bacteria of the gut and then created multiple profiles of people based on their bacteria.Their study showed that different people eating the same foods can have different sugar — or glycemic — responses, depending on the kind of gut bacteria they have.

Shooting for the Moon: Beresheet, by SpaceIL

Beresheet was an Israeli spacecraft that never managed to land on the moon, crashing on it instead, but was a winner anyway because of the chutzpah and daring it represented. Had the landing succeeded, it would have made Israel the fourth country, with the first privately owned spacecraft, to land on the moon. 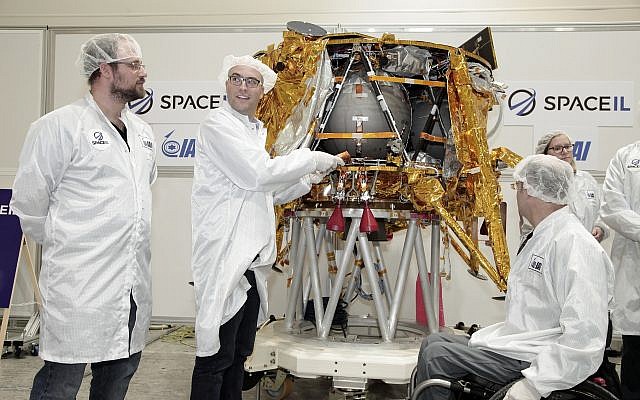 “We are on the moon, but not in the way that we wanted to,” operational control director Alex Fridman said grimly to engineers in the control room after the spacecraft crashed on the moon in April this year.

The spacecraft, roughly the size of a compact car, was budgeted at fraction of the cost of vehicles launched to the moon by major powers US, Russia and China in the past.

It was a crazy idea that was hatched by three friends at a bar in Holon, Yonatan Winetraub, Kfir Damari and Yariv Bash, who set up the SpaceIL startup to propel their moon-landing dream. Together they somehow collected $100 million in donations, harnessed a team of dozens of engineers, and captured the attention and dreams of Israel and the world.