London says it’ll look at tens of millions given to UN refugee agency; one physics book discusses use of slingshots against IDF soldiers, others praise terrorists 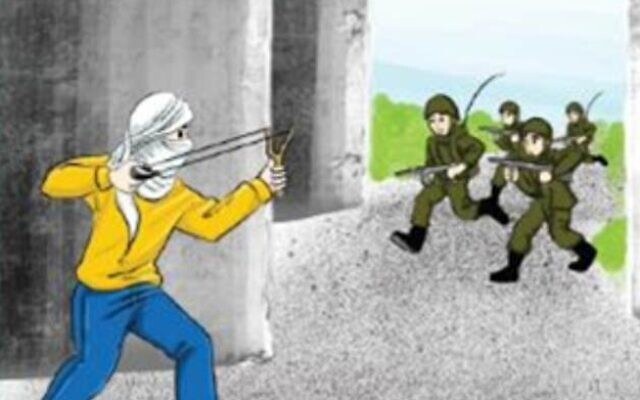 An image said to be from a Palestinian school textbook covering physics which shows a Palestinian boy shooting a slingshot at Israeli soldiers. The caption, according to the Daily Mail, reads: ‘What is the relationship between the elongation of the slingshot’s rubber and the tensile strength affecting it? What are the forces that influence the stone after its release from the slingshot?’ (Courtesy IMPACT-se)

British officials have pledged to urgently review the tens of millions of dollars in aid the UK provides to the UN agency for Palestinian refugees, after an investigative report found that a majority of the funds have been going to schools in the West Bank and Gaza Strip which use textbooks that incite violence against Israelis.

According to a Friday report in the UK-based Daily Mail, the Department for International Development and its secretary, Anne-Marie Trevelyan, vowed to raise the issue with the Palestinian Authority, adding that London was working to carry out an independent review of the Palestinian textbooks.

“The UK Government has a zero tolerance approach toward incitement to violence,” a spokesman for the department told the Daily Mail.

The Daily Mail report included several examples of alleged incitement uncovered in textbooks used at schools funded by the UN Relief and Works Agency for Palestine Refugees (UNRWA). In one math textbook for nine-year-olds, students are asked to add up the number of martyrs from Palestinian uprisings, accompanied with images of their funerals. In another, 11-year-olds are taught Newton’s Second Law of Physics with a depiction of a boy pointing a slingshot at Israeli soldiers.

Other photos showed Palestinians using slingshots against Israeli forces and quizzed students on their potential use and effectiveness, as well as precautions to employ while using them. 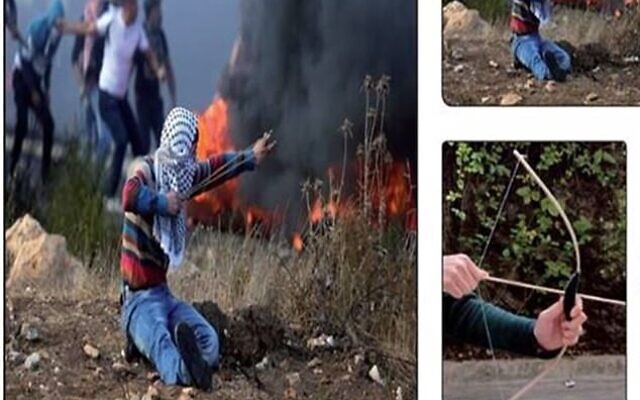 An image said to be from a Palestinian school textbook shows Palestinians using various weapons against Israeli soldiers. The caption, according to the Daily Mail, reads: ‘During the Palestinian Stone Uprising of 1987, the youth of Palestine used a slingshot or the ‘shu’ba’ to confront the bullets of the Occupation army soldiers who were breaking into Palestinian towns. The Palestinians had no other means of defending themselves. Answer the questions: 1. Have you seen a slingshot in your environment? What are its uses? 2. What is its usefulness for shooting stones? How does it work? 3. Examine the forms of energy transformations of the stone, from the moment it is set in the slingshot position until its launch toward the target. 4. Formerly, bows and arrows were used as a means of self-defense. Explain the principle of how it [the bow] works in launching an arrow toward the goal and compare it with the principle of how slingshots worked in the Palestinian stone uprising. 5. What safety precautions should be taken into account when using the slingshot?’ (Courtesy IMPACT-se)

Textbooks were found to praise Palestinian “martyrs,” including Dalal al-Mughrabi, who led the 1978 Coastal Road Massacre during which Palestinian terrorists hijacked a bus and murdered 38 Israelis.The materials revealed by the Daily Mail and their translations were provided to the paper by the Institute for Monitoring Peace and Cultural Tolerance in School Education (IMPACT-se).

The UK has given some $427 million in aid to UNRWA over the past five years with another $84 million pledged for the coming year. Roughly 62 percent of that funding goes to schools in the Palestinian territories, which could be using such textbooks.

Responding to the Daily Mail report, UNRWA said in a statement that it “cannot alter host government curriculum as this is a matter of national sovereignty, but it does have robust systems in place to ensure education delivered in its schools reflects UN values.”

Last May, the European Union announced that it would conduct an examination of new Palestinian school textbooks following a study that found them to be more radical than in the past and containing incitement and rejection of peace with Israel.

The development came after the European Parliament in April 2018 passed legislation geared to prevent hateful content in Palestinian textbooks. In October of that year the parliament’s budgetary committee recommended freezing more than $17 million in aid to the Palestinian Authority over incitement against Israel in its textbooks.

The EU hands the PA 360 million euros ($404 million) per year, with most earmarked for its education ministry. In addition, the European body donates $178 million to UNRWA, much of which goes to its schools that teach the PA curriculum.