Steinitz: ‘No situation’ in which right-wing bloc will break up and some will join Gantz 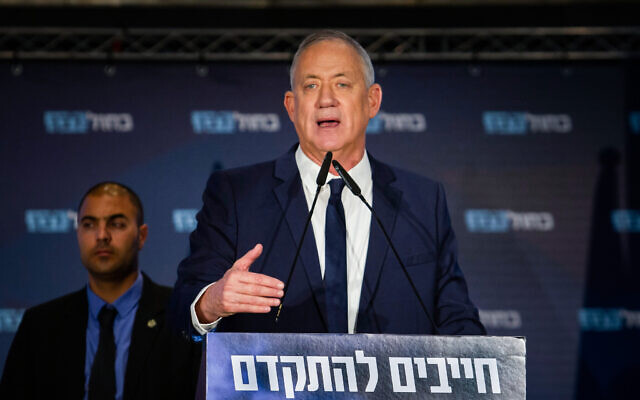 Blue and White Party chief Benny Gantz on Tuesday ruled out including the predominantly Arab Joint List in any future coalition and declared that he would implement the Trump administration’s peace plan if elected in the upcoming national vote.

But Gantz, a former army chief of staff, came out against provisions of the White House deal that suggested Arab Israeli towns could become part of a future Palestinian state.

Touring Arab Israeli communities in the country’s north, Gantz rejected the prospect of partnering with the alliance of four majority-Arab parties in any future government.

“I am not afraid to speak to any legitimate political party, but the Joint List will not be part of the government I form,” he said. “My disagreements with its leadership on national and security issues are deep, difficult and unbridgeable.”

Prime Minister Benjamin Netanyahu responded Tuesday, saying in a Twitter post that Gantz “was misleading the public. Without the support in the Knesset of [MKs] Ahmad Tibi, Ayman Odeh and the Joint List, Gantz won’t be able to form a government. Blue and White voters are switching to Likud because they know that only Likud under my leadership can form a strong and safe right-wing government.”

Gantz’s comments came after Joint List chair Ayman Odeh said on Tuesday that he will not back Gantz as prime minister after the March 2 elections unless he made a clear statement publicly ruling out elements of the US peace plan, namely a transfer of some Arab Israeli towns to a Palestinian state and the extension of Israeli sovereignty to the Jordan Valley and other areas of the West Bank.

Hours later, Gantz said he opposed the former but did not comment on the latter.

“I want to take this issue off the table and state that no Israeli, Jewish or Arab citizen will be coerced into another country,” Gantz said.

Gantz stressed that he “intend[s] to implement President Trump’s peace plan, in coordination with all the elements in the region, and see it as a significant milestone.” 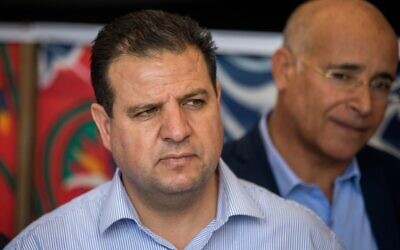 Without support from the Joint List, Gantz is unlikely to have enough MKs behind him to get the nod after the coming March 2 elections. Gantz is hoping to unseat Prime Minister Benjamin Netanyahu, who polls have shown continues to lead a right-wing and religious bloc of MKs that is larger than the opposition bloc Gantz can muster without the Joint List.

While the Joint List in the wake of the previous elections in September recommended to President Reuven Rivlin that Gantz negotiate a coalition, Odeh said Tuesday that “there is no way that we will support him again or recommend him if he doesn’t come out against this [the Trump plan].”

“We have nothing in common with Liberman,” he said. “We are as far as possible from him. There is no way that we will support any government that includes Liberman.”

After US President Donald Trump unveiled his peace plan at the White House on January 28, Gantz said he would bring the proposal for approval by the Knesset if he is elected prime minister. Netanyahu also embraced the proposal, while the Palestinians rejected it entirely. 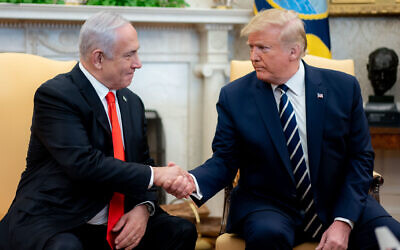 The plan allows for Israel to extend sovereignty to the Jordan Valley and its settlements in the West Bank — areas the Palestinians want for a future state. Another controversial proposal is redrawing Israel’s borders to see multiple Arab towns in the so-called Triangle area included in the future Palestine.

Netanyahu has stated that Gantz could form a minority government “that relies on those who reject Israel as a Jewish and democratic state and glorify terrorists that murder our soldiers and citizens,” a claim that Gantz has rejected.