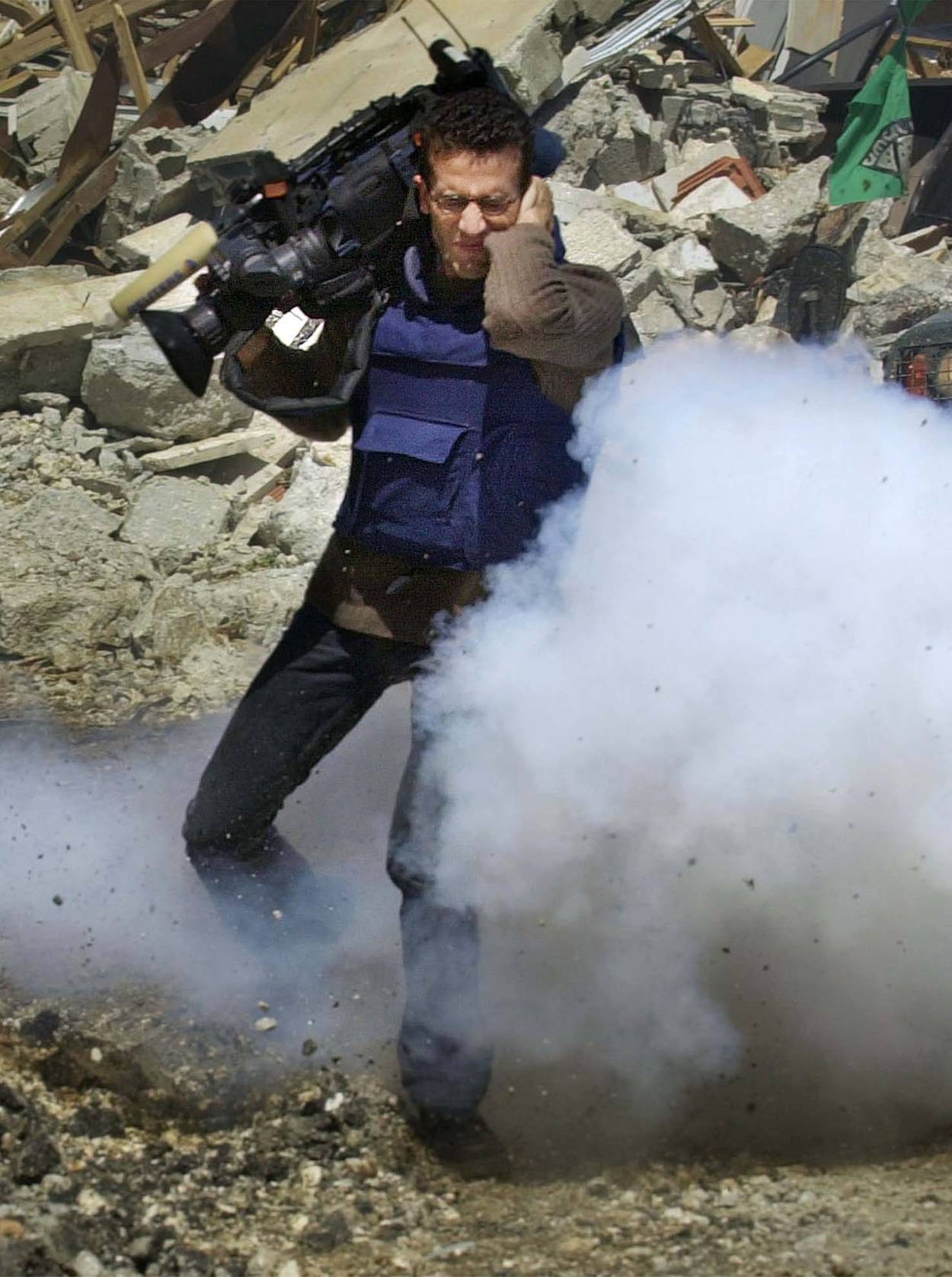 A video cameraman for the Reuters News Agency in the West Bank city of Ramallah, April, 2002>CHRIS HONDROS/GETTY IMAGES

This year many people have discovered that liberal life and institutions in the West are in the grip of something resembling a new religion. Anyone following the doings of the past few months won’t need a recap of the attempted “cancellations” of scholars and scientists for heresies, the purge of editors for running the wrong op-ed, or the excommunication of J.K. Rowling.

Adherents of the thought system vaguely described as “woke” believe themselves to be fighting evil in the name of justice. They share a hierarchy of good, a lingo, purity tests, and a stark division of the world into friend and foe, all of which borrow heavily from religious modes of thought. But one of the most obvious signs that religion is in play, and not merely empirical observation or political criticism, is the way this ideology has focused and amplified the condemnation of Jews.

All of this has made me think differently about my experience as a reporter in Israel a decade ago, and particularly about an essay I wrote in 2014 for Tablet, which was one of the first publications to pick up on these trends. That essay, “An Insider’s Guide to the Most Important Story on Earth,” and a second one that appeared in The Atlantic, described the replacement of journalism here by activism, the subjugation of objective description to higher ideological truth, and the manufacture of politically driven morality plays in the guise of news. I took this to be a problem related to, and perhaps limited to, perceptions of Jewish people and of Israel.

From the vantage point of 2020, that understanding was far too narrow. To pull a metaphor from this strange moment: I thought I’d seen the outbreak, when I was really just hanging out in the wet market. The Israel story was just a formative stage in the evolution of a more ambitious set of ideas. Israel was an early target for adherents of the movement for social justice, but it wasn’t just that. It was a place to manufacture a mobilizing mythology.

Upon gaining admission to the tribe of Western journalists in Jerusalem in 2006, I found that it wasn’t enough—or necessary, or sometimes even desirable—to be knowledgeable about the region or to speak its languages. The important thing was adopting a creed, one which seemed strange to me then but is widely familiar now. This outlook included a dim view of America; sympathy for all international organizations; an aversion to fervent Christianity and a healthy respect for fervent Islam; a considerate attitude toward despotic regimes from China to Iran, which are not “the problem”; the idea that the moral high ground has something to do with skin color; the belief that while groups like Hezbollah, Hamas, and the Muslim Brotherhood might sometimes go too far, they do have a point; and the idea that the world would probably be improved if Jewish sovereignty could somehow be reduced to zero percent from the current high of 0.01 percent.

The rigors of reporting were abandoned for the simple pleasures of the sermon.

The key credo, however, was that recognizing complexity was desirable only within the tenets of the belief system. Outside of those tenets, complexity was not just unwelcome but wrong. That is, you could discuss how evil the Israelis are, or Republicans, or “nationalists” from India or France, or oil companies, or anyone on the approved list of wrongdoers—but not suggest they might be right, or their opponents mistaken. The rigors of reporting, in other words, were abandoned for the simple pleasures of the sermon.

I’m lucky enough to have grown up with traditional religion, and I’ve experienced religious behavior from moderate to extreme. What I was seeing in the mainstream press was a move from rational observation into a kind of moral judgment that I knew from other parts of my life. The guiding idea was no longer to understand what was going on; there was nothing to understand. We knew who was right and who was wrong, and it remained only to anathematize the bad guys so far into disrepute that even the act of trying to understand them would be a kind of sin.

To achieve this effect, the news narrative in Israel was constructed, without undue difficulty, with tricks of storytelling and framing: pretending the conflict is one between Israelis and Palestinians and not a much broader Middle Eastern war; pretending the Palestinian national movement merely wants a state beside Israel; dismissing Israeli attempts to solve the conflict on reasonable terms; erasing the actions of Israel’s opponents so Israel’s own actions and fears seem irrational or duplicitous; and suggesting the Jewish instinct for self-preservation in the Middle East is “right wing” while the Islamist war against Jews or the Iranian drive for regional hegemony are somehow about “human rights.” The ideology not only puts forward its own explanation for things but rules out any other explanation. If you point out that none of this is true, you’re whitewashing oppression and will be tarred as a racist, as I eventually was, joining a list that was less illustrious at the time than it is now.

Today all of this seems almost wearily familiar from “cancel culture.” But it wasn’t widely familiar a decade ago, because in many ways Israel was patient zero. The successful creation and promotion of the Israel story transformed a real country into something so dangerous and disruptive to the desired order that it had to be canceled—an aspiration that has actually become a staple of politics on the left, and is now aired in the press as if it were completely rational. It’s the same thinking behind the idea that an op-ed by a right-wing senator is too dangerous to be published in a newspaper of record, or that it’s necessary to pulp books in which a human being of one ethnic background imagines how the world might appear to a human being from another. The creation of the malevolent “Israel” of the news, and the subsequent push to render an entire country beyond the pale, created a pattern that has been replicated against targets ranging from nonconforming biologists to the author of books about teenage wizards. Of course the list of heretics is growing, as such lists always do.