Gesher MK reverses previous position of not supporting any candidate, includes herself in PM’s bloc of right-wing parties; Meretz MKs accuse her of stealing left-wing votes 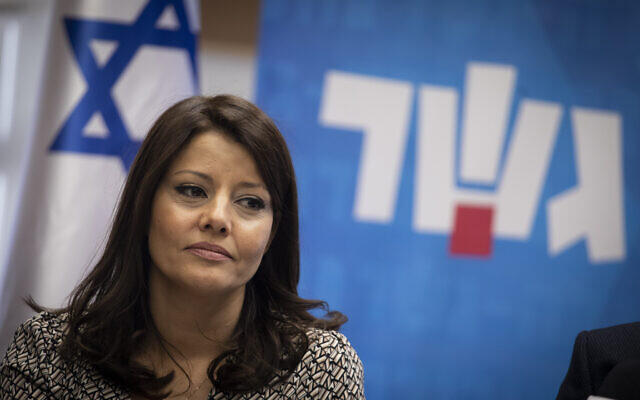 Labour-Gesher party co-chairwoman Orly Levy-Abekasis at a faction meeting at the Knesset on November 11, 2019 (Hadas Parush/Flash90 )

Gesher MK Orly Levy-Abekasis called on Sunday for Prime Minister Benjamin Netanyahu to be tasked with forming a government, changing her previous position of not recommending any candidate, and included herself in the premier’s bloc of right-wing religious parties.

Levy-Abekasis broke off last month from the now-defunct Labor-Gesher-Meretz alliance, citing her opposition to a potential government led by Blue and White chairman Benny Gantz that was supported by the predominantly Arab Joint List.

She initially refrained from recommending either Netanyahu or Gantz to form the next government. Gantz was ultimately tasked by President Reuven Rivlin with doing so and on Saturday asked for a two-week extension to assemble a government amid stalled coalition talks with Netanyahu’s Likud.

Rivlin on Sunday denied the request.

“Gantz’s request to the president of the state for an extension of the mandate is an announcement of his lack of ability to form a government,” Levy-Abekasis wrote in a Facebook post on Sunday, before the president’s announcement. 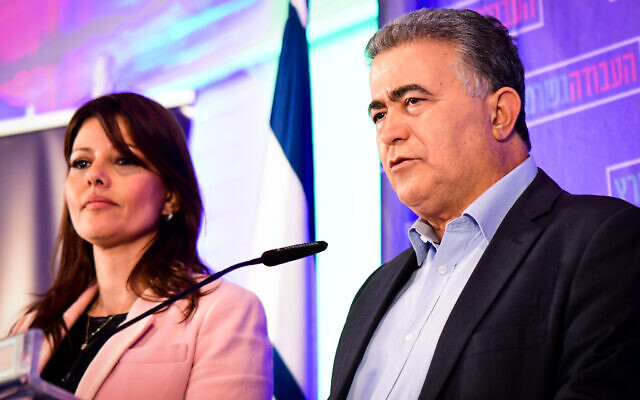 She cited three reasons why Netanyahu should now receive the mandate to form a coalition: Likud is the largest party in the Knesset; the prime minister-led bloc is the largest cohesive alliance with 59 seats; and the transition government is continuing to function.

The parties that make up Netanyahu’s bloc — Likud, Shas, United Torah Judaism and Yamina — together have 58 seats, with Levy-Abekasis apparently including herself as the 59th.

Lawmakers from the left-wing Meretz party slammed their former electoral ally for the move.

“She doesn’t represent a single voter who voted for our list. This is a despicable move of stealing votes from the left to obtain personal benefit. The political bribery agreement between her and Netanyahu needs to be uncovered immediately,” Meretz leader Nitzan Horowitz said in a statement.

Meretz MK Tamar Zandberg also hit out at Levy-Abekasis, accusing her of having “no morals.”

“With her previous move I wondered how Orly Levy-Abekasis can sleep at night. Now I understand she has no conscience and no morals and not even a minimum [amount] of shame,” Zandberg tweeted.

Levy-Abekasis was previously a lawmaker on the right-wing Yisrael Beytenu list, but broke with the party in 2016. Her partnership with Labor’s Amir Peretz ahead of this year’s election was seemingly based on shared social economic interests.

In his request for an extension, Gantz cited the coronavirus pandemic and the Passover holiday as having caused delay in negotiations to form a government. He said he had moved toward forming a unity government with Netanyahu due to the “political, health and social crisis… even while paying a heavy political and personal price.”

Coalition negotiations between Likud and Blue and White reportedly resumed Friday, but there were still no signs a deal to form a new government was nearing.

On Saturday evening, Netanyahu called on Gantz to meet at the Prime Minister’s Office in Jerusalem to continue talks “out of national responsibility.”

Netanyahu and Gantz spoke Wednesday before the start of the Passover holiday, agreeing to resume negotiations after Passover and stressing their commitment to forming a government.

Hours earlier, their parties traded blame for the impasse in talks, with Gantz claiming the sides had nearly reached a coalition agreement but Likud sought to change an understanding reached on judicial appointments.

Netanyahu’s party was previously said to have demanded veto rights in the judicial appointments committee, or that decisions only pass with a majority of eight out of nine members. Those demands were then shelved — with the parties saying that any decisions will be made in agreement — before Likud was reported to have gone back on the matter, leading negotiations to stall.

Gantz, for his part, was said to have acquiesced on the potential annexation of parts of the West Bank under the US peace proposal, relinquishing his demand for a veto on the matter.

The coalition talks with Likud have led to the dissolution of Blue and White’s alliance with the Yesh Atid and Telem parties.

In another shakeup, Labor’s Peretz announced last week he would merge with Blue and White.