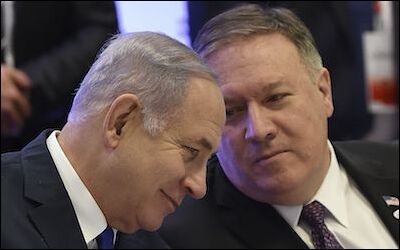 U.S. Secretary of State Mike Pompeo is arriving in Israel on Wednesday to meet with Prime Minister Benjamin Netanyahu. His visit presents a perfect opportunity, at a perfect time—with most of the globe preoccupied with the COVID-19 pandemic—for the two to announce that Israel will begin to implement U.S. President Donald Trump’s “Peace to Prosperity” plan and annex parts of the Jewish-inhabited portions of the West Bank.

Though tempers around the world likely will flare, no sane government will shift its focus from managing the coronavirus crisis to intervening in the Palestinian-Israeli conflict. Cynical realpolitik? You bet.

The pandemic is not the only reason that the time is ripe for annexation, however. Another is the fact that Trump’s political opposition is desperate to keep Israel from becoming a 2020 campaign issue—one that threatens to cause an internal eruption in a divided Democratic Party. Left-wing commentators, such as Mondoweiss correspondent Michael Arria, are noting hesitancy on the part of Joe Biden’s campaign to come out forcefully against Israel. And regardless of what Biden might do if elected president, Israel could establish irreversible facts on the ground between now and next January.

Furthermore, Israel already annexed the crown jewel of the disputed territories, eastern Jerusalem, with little tangible consequence. Indeed, the Jewish state has a track record of successfully managing related international backlash, which at the time included actions at the Security Council that today would be vetoed by the Trump administration.

Unlike when east Jerusalem was annexed in 1980—and a significant chunk of Europe was behind the deeply anti-Israel Iron Curtain—today Israel has key allies like Hungary, which along with Austria, has proven willing to torpedo punitive measures against Israel contemplated by the European Union.

Much like the Democrats in the United States, the European Union does not wish needlessly to sow further internal division by embroiling itself in a contentious foreign conflict. It should come as no surprise, then, that unlike the pre-Brexit E.U., which openly spoke of sanctions against Israel, the post-Brexit E.U. is taking a more restrained position.

Even Israel’s most ardent critics of annexation—such as Hagai El-Ad, the executive director of the left-wing NGO B’Tselem: The Israeli Information Center for Human Rights in the Occupied Territories—concede that Europe seems unwilling to thwart annexation.

More surprising has been the relatively tepid response from the Arab and greater Muslim world to Israel’s steps towards annexation. Even as settlement construction is being greenlit by the Israeli government at a record pace, Saudi Arabia is not-so-subtly priming its population for relations with Israel—in the form of a TV series that positively depicts Jews—and Sudan publicly speaks of establishing diplomatic ties with Jerusalem.

True, the expected boilerplate opposition to annexation has emerged at the Arab League, but this cannot erase years of increasing Arab acquiescence to Israel’s solidifying of its position in parts of the West Bank. Nor can it obfuscate the fact that even many of Israel’s current and former enemies have grown weary of Palestinian obstructionism and are beginning to see that the powers-that-be in Ramallah and Gaza have left Israel with few options.

Whether through lip service to a two-state solution, whose “fine print” demands that Israel open its borders to millions of Palestinian immigrants (which they refer falsely to as “returnees”), or by continuing an unapologetic “pay for slay” policy to terrorists who kill Jews, the Palestinian leadership has proven that it is not interested in peace.

Israel and the Trump administration, therefore, have no choice but to go at it alone.

Israel is under no obligation to annex the entirety of the territory allotted in the Trump plan all at once. By initially applying sovereignty only to territories previously understood as eventually falling on the Israeli side of the border, the Palestinians will be placed on notice that in the absence of immediate good-faith negotiations and a halt to incitement and terrorism-subsidizing, the Jordan Valley could be next.

If the definition of insanity is “doing the same thing over and over again and expecting different results,” then the status quo of the Israeli-Palestinian peace process belongs in the penthouse of the asylum. Trump and Israel’s pro-annexation majority recognize that it’s time for a new approach—one that conforms to a sane reality.

It is this approach that Pompeo and Netanyahu will and should be discussing this week.

Matthew Mainen is a Washington-resident fellow at the Middle East Forum and graduate of Stanford Law School. Follow him on Twitter.