T. Belman. I trust Trump’s intentions and am willing to play ball. I do not trust Netanyahu because of his many false promises. This is Trump’s baby and we should let him call the shots.

We cannot be “greedy” and try grabbing everything at once, because this is also the quickest way to lose everything. If Israel opts for an approach that is viewed by Riyadh and Cairo as too aggressive, the Trump administration’s strategic victory of rallying the Arab world against the Palestinians could dissipate. 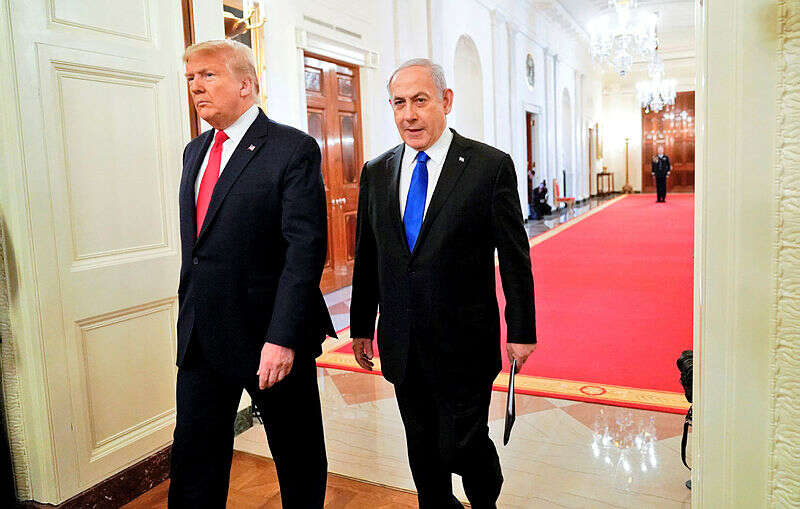 The prime minister has attained historic support for the policies he has championed for decades on behalf of the nationalist camp, but to implement them he must be cautious and patient. Otherwise, this history-in-the-making will remain on paper, or worse will boomerang against us.

Like many in Israel in general and the nationalist camp in particular, I too share the sense of satisfaction and joy that the concept of “peace now” has finally been replaced with “sovereignty now.” In contrast to the Left, however, whose irresponsible hastiness and inability to delay gratification created diplomatic and security crises for Israel, some of which remain unresolved to this day – the Right needs to demonstrate, at this juncture incidentally, diplomatic restraint. This was always the difference between the pragmatic Right and the impulsive Left, and it should remain this way.

1. After securing the most important and significant presidential declaration since Harry Truman, Netanyahu must cooperate with President Trump to realize history, and maybe even give him the right to take the lead during the first few steps. Ultimately, this is also about the 45th president’s legacy. As President Trump said at the peace plan’s unveiling:

“We will form a joint committee with Israel to convert the conceptual map into a more detailed and calibrated rendering so that recognition can be immediately achieved.”

Trump granted this boon to Israel on Netanyahu’s watch, not out of personal affection but in the understanding that as prime minister and the country’s strongest right-wing leader in decades, he can put it into action. If he “burns the capital” he received to impulsively, and as a result embarrass our greatest ally, or if the Left rises to power – Trump’s road map, and all its vital assurances for Israel, will lose its relevance. We cannot be “greedy” and try grabbing everything at once, because this is also the quickest way to lose everything.

Because we’re so accustomed to the Left’s peace deals, which could just as well have been written on ice in the desert, it’s hard for us to internalize that Trump’s plan is an actual change of direction; it is substantive and feasible. The urge to implement it tomorrow morning is understandable, because who knows what the geo-political reality will look like in two days. But the success of the move to ratify the application of sovereignty into law depends on full American support. Intermediate steps can and should be taken, as long as it’s agreed that the application of sovereignty must be coordinated with the US.

2. Yes, we’re allowed to aspire, and we can even call for sovereignty to be imposed. But we don’t want to stand around with a stopwatch and put added pressure on the president of the world’s most important superpower, because his administration also has diplomatic and regional concerns to consider. Does he need to prove he is a true friend of Israel? After all, he has acted against Iran more than any of his predecessors, not to mention the unprecedented gestures he has already made on Israel’s behalf.

Netanyahu must continue working in synchronicity with him, precisely as before, so that the piece of paper presented on Tuesday becomes hard facts on the ground. The task force labored three long years to create this document, and now is the time for diligent work to implement the road map that will change the future of the region for dozens and hundreds of years.

This isn’t something that can be done in a serious manner, even if it’s technically possible, within a matter of weeks. At present, it also isn’t clear whether Trump will remain in the Oval Office until January 2021 or January 2025. Therefore, we must proceed under the assumption that we have one year to successfully implement his plan. Failing to use this year correctly will be the mistake of a lifetime, hence it’s more important to be deliberate and precise than hasty and miss the mark.

It’s best to let the diplomatic developments mature, to forge understandings, to let the US take the lead – and only then bring sovereignty to full fruition. If Israel opts for an approach that is viewed by Riyadh and Cairo as too aggressive, the administration’s strategic victory of rallying the Arab world against the Palestinians could dissipate.

3. We owe a great debt to Trump and his administration, and of course to Jared Kushner, Jason Greenblatt and David Friedman. There has never been a team more attentive to our diplomatic and security needs. Thus, because they listened to us these three years, we need to listen to them this time.

The past 36 hours were perhaps the best Israel has known since the first day of the Six-Day War. Could any of us have imagined three or five years ago, or 15 years ago, what Netanyahu has managed to obtain? Of course not. These are conditions that up until recently were considered an unattainable fantasy. They cemented Netanyahu’s legacy: securing Israel’s future and standing in the international arena.

Netanyahu worked toward this objective, but this tremendous achievement isn’t his alone; it belongs to all of Israel, which is why Benny Gantz was also invited to the White House. This peace plan is here to stay, for future governments as well.

The prime minister is about to face immense pressure to do something now. I beseech you, Mr. Prime Minister, do what you can to follow Trump’s road map of opportunities, but at the same time, make sure to leave him some wiggle room so that we can continue marching together with Trump and the Sunni world as one. You have the opportunity to capitalize on the magnitude of the hour and make history, but do it by following the same path that’s brought you this far up to now. If you turn the election into a national referendum on the implementation of the plan, you will be able to unite the Right behind you.