Mohammed bin Salman, one of the most powerful men in the Middle East, chose a weekend when the world was preoccupied with the novel coronavirus to assert his standing at home and abroad 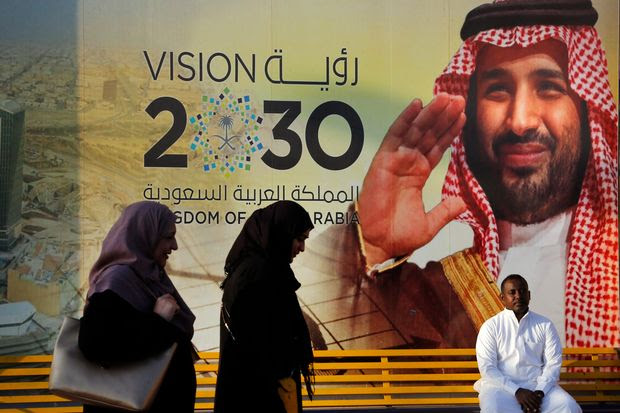 In just 24 hours, Saudi Arabia’s crown prince launched an oil-price war with Russia and sidelined a domestic rival to cement his power at home. But his surprise actions on the world stage and within his own kingdom were set in motion months ago.

As Saudi Arabia was gearing up to sell shares in Saudi Aramco, its national oil company, late last year, Crown Prince Mohammed bin Salman had teamed with Russia to limit oil production and keep prices high. But that partnership was faltering. And in the weeks leading up to the December initial public offering, the crown prince—the kingdom’s day-to-day ruler—had clamped down on political rivals in Riyadh.

The two strains culminated publicly—Friday in Riyadh when masked security personnel detained several high-ranking Saudi princes, and Saturday around the world when the crown prince abandoned his Russian alliance and decided to flood the globe with cheap oil. Investors responded Monday by driving down oil and stock prices.

It isn’t clear if the crown prince’s moves were linked. The Saudi government has said little about the detentions.

What is clear is that one of the most powerful men in the Middle East chose a weekend when the world was preoccupied with the spreading novel coronavirus and faltering markets to assert his standing at home and abroad—consolidating his power in Saudi Arabia while showing he will use the kingdom’s sway over the oil market to achieve his political ends.

In doing so, the crown prince, known as MBS, flexed his market power abroad in a way Saudi Arabia hasn’t for more than four decades, since then-King Faisal launched an oil embargo against the U.S. in 1973, says Adel Hamaizia, an associate Middle East fellow at London’s Royal Institute of International Affairs.

“It certainly makes sense to view the royal detentions in the context of the collapsing oil negotiations with Russia,” says Kristin Smith Diwan, of the Arab Gulf States Institute in Washington. The crown prince, she says, “understands that things are going to get really rough economically and wants to make sure everyone is in line in advance of these new challenges. He needs more revenue.”

People familiar with the kingdom’s decision-making say the crown prince overrode the opinions of the current oil minister, his brother, to start the price war. A Saudi Embassy spokesman in Washington declined to comment or to make Crown Prince Mohammed, oil minister Abdulaziz bin Salman or other Saudi officials available for interviews. A Royal Court representative didn’t respond to questions.

At home, the crown prince has ended many social restrictions while trying to diversify the oil-dependent economy. At the same time, he has sidelined would-be rivals in government and cracked down on critics. He has jailed dissidents, and men working for him killed critic Jamal Khashoggi in 2018. The crown prince has denied ordering the killing.

On the global stage, one of his main goals was to carry out an IPO of Saudi Aramco. The December offering was the world’s biggest, raising $25.6 billion and valuing the company at about $1.7 trillion. But bankers widely saw it as disappointing because it occurred on the small Saudi stock market, rather than on a global exchange as the crown prince originally planned.

The crown prince’s domestic crackdown on Friday harks back to November in the isolated Riyadh palace of Mohammed bin Nayef, the former crown prince known as MBN, say people close to the deposed prince. In 2017, Mohammed bin Salman had put his former rival for the throne under tight restrictions when he pushed him out of the crown-prince role.

MBN and his uncle, who is a brother of the king and was also detained, are two of the crown prince’s biggest political rivals.

Initially, say people close to MBN, the new crown prince kept his cousin under house arrest. By November, MBN was allowed to move between his Riyadh homes, desert camp and family events. But his bank accounts had been drained and the once-powerful prince—a former interior minister and a top antiterrorism contact for U.S. officials—was sullen and full of complaints, the people say.

The crown prince’s men kept close tabs on MBN and relayed his gripes to their boss, say the people close to MBN. In November, MBN visited his uncle, the king’s brother Prince Ahmed bin Abdulaziz and complained his wife and daughters were being “starved” since their royal stipends and financial holdings were curtailed.

Later in November, MBN got a call from the Royal Court. Pay a visit to the National Guard, an official told him, or face consequences, say the people close to him. The former crown prince, they say, ignored the message.

Days later, Royal Court guards descended on MBN’s Riyadh palace and took away a group of his closest employees, including secretaries, IT staff and his closest remaining guard, say the people close to him, confiscating electronics and jailing employees including non-Saudis. They built a fence around MBN’s helicopter pad, says a person familiar with the matter, possibly to prevent him from escaping.

Guards questioned the jailed employees about whether MBN was plotting an escape or coup, say the people close to him. The employees were released, but MBN’s security was put in the hands of men working for the Royal Court.

On Friday, Royal Court guards wearing masks and dressed in black went to the homes of MBN and the king’s brother, Prince Ahmed, detaining them and others, say people familiar with the episode. Prince Ahmed is a full brother of the king and has been critical of the crown prince publicly and privately in recent years. Members of the royal family who disagree with the crown prince’s governance have suggested privately that Ahmed should be the next king.

The timing remains unexplained. Neither MBN nor Prince Ahmed had behaved in a way suggesting they believed they were at risk of arrest. Prince Ahmed had recently returned home from a weekslong hunting trip, say the people familiar with the episode.

The royal court declined to make MBN and Prince Ahmed available to comment.

A government minister named Musaad al Aiban, who specializes in cybersecurity, called royal-family members to tell them Prince Ahmed and MBN were being held on suspicion of treason, say people familiar with the matter.

It was possible the Royal Court presumed that, with the world preoccupied with the coronavirus and financial markets, news of the arrests would receive less attention, say the people familiar with the episode.

The crown prince’s second surprise move this weekend harks to another persistent annoyance: low oil prices. Since he rose to power with his father’s ascent to the Saudi throne in early 2015, prices have been depressed in part because U.S. shale drillers flooded world markets, offsetting Saudi attempts to reduce supply.

What could happen next to further roil world markets? Join the conversation below.

Low prices meant Saudi Arabia had to borrow to balance its budget and made it difficult for the crown prince to carry out his expensive economic-transformation plans, which include a new $500 billion high-tech city in the desert. The Saudi Aramco IPO was supposed to bring in cash to help fund those plans, but low oil prices made its shares less attractive.

Saudi Arabia got a reprieve in 2017, when it joined with Russia to limit supply and prop up prices. The alliance held up through the December 2019 IPO. But in the months after, Russia grew keen on increasing production to boost its economy.

The crown prince asked his father, King Salman, to phone Russian President Vladimir Putin and request cooperation on further cutting output, say people familiar with the episode. Mr. Putin initially said he was too busy to talk, an embarrassing slight to an absolute monarch, the people say. When the men did talk on Feb. 3, Mr. Putin didn’t commit to a deal, they say.

A spokesman for Russia’s energy ministry declined to comment. A Kremlin spokesman didn’t respond to a request for comment.

Then, Russian representatives in early February told an emergency meeting of the Organization of the Petroleum Exporting Countries they wouldn’t make a deal because it was too early to assess the impact of the coronavirus on global oil demand, say people familiar with the meeting and its aftermath.

The crown prince still expected an agreement. “This is when it started to look bad for several of us,” says one of the people.

The situation festered for close to a month, with Saudi Energy Minister Abdulaziz bin Salman lobbying the crown prince last Thursday to cut production for only three months, say the people familiar with the meeting. The crown prince overruled him, insisting the curbs last the year, say some of the people.

As he was preparing to squeeze his royal rivals at home, the crown prince tried to turn the screws on Russia, demanding bigger production cuts, say some of people familiar with the meeting. When Russia didn’t budge, he told several Saudi ministries to prepare for a no-deal scenario in which there would be no production cuts even though global demand was tumbling because of the coronavirus, some others familiar with the meeting say.

“The message the Saudis wanted delivered to the Russians was you are either agreeing on a cut,” says a Saudi official familiar with the matter, “or we won’t cut at all.”

Again, the Russians didn’t budge. “I have no idea how did the Saudis think that this kind of pressure would have worked on Putin,” says an OPEC delegate familiar with the matter. “This was utterly suicidal and we all knew the outcome would be disastrous.”

On Saturday, Saudi officials said instead of cutting production, they would boost it, driving down the price of oil. “It was the Saudi declaration of war against Putin,” says a senior Saudi official.

Within hours, the Royal Court told finance-ministry officials to prepare a budget scenario with benchmark Brent crude prices dropping into a $12-to-$20-a-barrel range, say people familiar with the directive. They feared spending cuts would wreck the Saudi economy, already battered by the cancellation of religious pilgrimages to the Muslim holy cities of Mecca and Medina.

Inside Saudi Arabia, the Royal Court on Sunday began releasing MBN and other royal-family members who were detained or summoned to the court and questioned, say people familiar with the episode. The royal family also released photos and videos of the 84-year-old king to dispel rumors he was ill.

Aramco’s shares fell 18%. Both sides escalated their feud, with Russia saying it would it would boost production and Saudi Arabia responding that it would raise capacity. Oil fell another 3% on Wednesday.

Russian Energy Minister Alexander Novak in public comments Wednesday said: “It would be better to maintain production levels at those that were achieved in the first quarter of this year, and we have taken such an initiative as part of our general agreement. Unfortunately, however, our partners did not agree with our proposal.”

Concern that Aramco would make business decisions based on Saudi political concerns was one reason some investors said they stayed away from its IPO. Aramco declined to comment. A spokesman for the Saudi energy ministry didn’t respond to requests for comment.

“This has proved to investors that their worst fear about Aramco were a reality,” says a Saudi official familiar with the IPO process. “The company’s plans and its output decisions are based on MBS’ erratic behavior.”

—Warren Strobel contributed to this article.