Suspect born in Moscow; detainees include parents of child at school where educator recently showed cartoons of Prophet Mohammed during class discussion on freedom of expression

By ELEONORE DERMY and STUART WILLIAMS 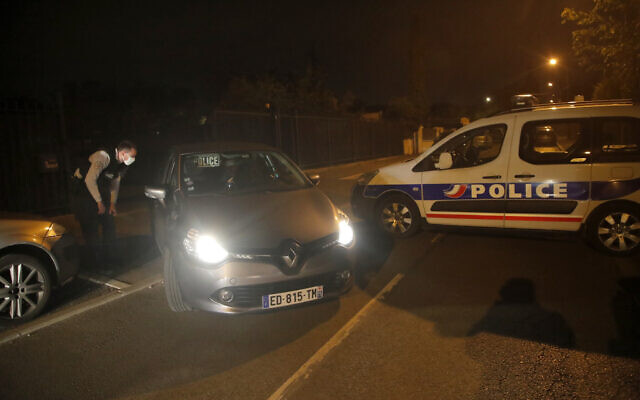 Police officers block the access after a history teacher who opened a discussion with students on caricatures of Islam’s Prophet Muhammad was decapitated in a French street on Friday and police have shot the suspected killer dead, Oct. 16, 2020 in Conflans-Saint-Honorine, north of Paris. (AP Photo/Michel Euler)

PARIS (AFP) — The man suspected of beheading a French teacher who showed his students cartoons of the prophet Mohammed was an 18-year-old Chechen, a source said Saturday, in what President Emmanuel Macron called an “Islamist terror attack.”

The attack took place late Friday afternoon near the middle school where the teacher worked in Conflans Saint-Honorine, a northwestern suburb around 30 kilometers (20 miles) from central Paris.

The assailant was shot by police and later died of his injuries.

Police said the victim was a history teacher who recently showed cartoons of the Prophet Mohammed as part of a class discussion on freedom of expression that had prompted complaints from some parents. 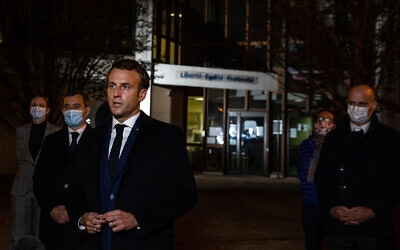 French President Emmanuel Macron speaks in front of a high school in Conflans Sainte-Honorine, northwest of Paris, after a history teacher who opened a discussion with students on caricatures of Islam’s Prophet Muhammad was beheaded, October 16, 2020. (Abdulmonam Eassa, Pool via AP)<
>
A judicial source told AFP on Saturday that five more people had been detained over the murder, including the parents of a child at the school where the teacher was working, bringing to nine the total number currently under arrest.

According to the source, who asked not to be named, the two detained parents had signaled their disagreement with the teacher’s decision to show the cartoons.

The three other new people detained for questioning are members of the suspect’s social circle. The four previously detained are all relatives.

The attack came as a trial is in progress over the January 2015 massacre at the offices of Charlie Hebdo satirical magazine, which had published caricatures of the prophet that unleashed a wave of anger across the Islamic world.

The magazine had defiantly re-published the cartoons in the run-up to the trial’s opening in September and last month a young Pakistani wounded two people with a meat cleaver outside the magazine’s former offices.

In a tweet, Charlie Hebdo expressed its “sense of horror and revolt” at Friday’s attack.

Identification documents found on the suspect showed he was an 18-year-old born in Moscow but from Russia’s southern region of Chechnya.

The attacker shouted “Allahu Akbar” (“God is greatest”) as police confronted him, a cry often heard in jihadist attacks, a police source said.

French anti-terror prosecutors said they were treating the assault as “a murder linked to a terrorist organization.” French police officers gather outside a high school after a history teacher who opened a discussion with students on caricatures of Islam’s Prophet Muhammad was beheaded in Conflans-Saint-Honorine, north of Paris, October 16, 2020. (AP Photo/Michel Euler)<
>
<
>
Police said they were investigating a tweet posted from an account that showed a picture of the teacher’s head, and which has since been shut down.

It was unclear whether the message, which contained a threat against Macron — describing him as “the leader of the infidels” — had been posted by the attacker, they said.

The killing bore the hallmarks of “an Islamist terrorist attack,” Macron said as he visited the scene.

Visibly moved, the president said that “the entire nation” stood ready to defend teachers and that “obscurantism will not win.”

At the school, parents and teachers alike paid tribute to the victim, who has not been officially named.

“According to my son, he was super nice, super friendly, super kind,” a parent, Nordine Chaouadi, told AFP. A police car enters the perimeter after a history teacher who opened a discussion with students on caricatures of Islam’s Prophet Muhammad was decapitated in Conflans-Saint-Honorine, north of Paris, October 16, 2020. (AP Photo/Michel Euler)<
>
<
>
“I saw him [the teacher] today, he came to my class to see our teacher. It’s shocking that I won’t see him again,” said Tiago, a student in sixth grade.

The teacher “simply said to the Muslim children: ‘Leave, I don’t want it to hurt your feelings.’ That’s what my son told me,” said Chaouadi.

Police had arrived at the scene after receiving a call about a suspicious individual loitering near the school, a police source said.

They discovered the dead man and soon spotted the suspect, armed with a blade, who threatened the officers as they tried to arrest him.

They opened fire, severely injuring him, and he later died of the wounds.