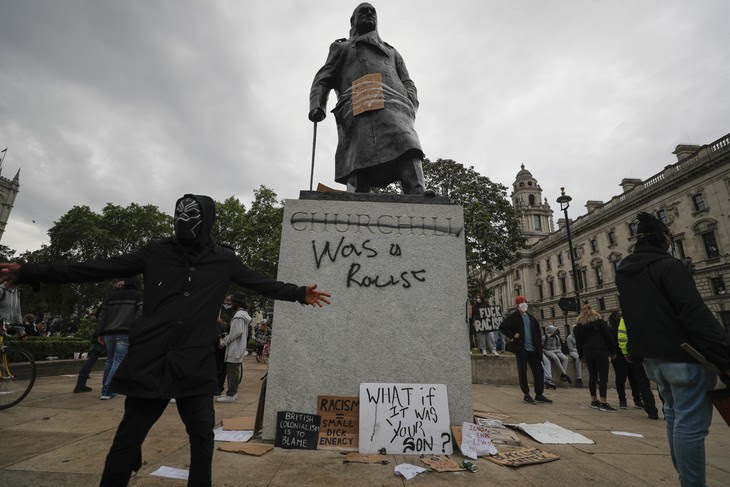 BLM Foundation and its activists and supporters claim that African Americans are constantly under threat from police and white attackers:  “Black Lives Matter Foundation, Inc is a global organization in the US, UK, and Canada, whose mission is to eradicate white supremacy and build local power to intervene in violence inflicted on Black communities by the state and vigilantes.” BLM Foundation claims that blacks are systematically targeted for murder: “We are working for a world where Black lives are no longer systematically targeted for demise.”

BLMF’s claims are not supported by facts. The reality is that of the 33,132,390 American blacks, during the four years 2009-2012, 260 blacks died in engagements with police, 215 of those who died having allegedly been armed. While some have argued that blacks at 32% of those killed are overrepresented in relation to population, blacks are substantially overrepresented among violent criminals, and the job of the police is to address criminality and protect the public.

There were over those four years 39 blacks killed who were allegedly unarmed, slightly more by percentage than unarmed whites and Hispanics killed. But 65 individual blacks killed annually is .0000019% of the black population killed by police. This is a clear refutation of BLMO’s claim that blacks are “systematically targeted for demise.”

No one is arguing that unjust police killings cannot occur. All Americans were revolted by the disgusting killing of George Floyd. There are also questionable killings of whites and Hispanics. All police should be held to standards of justice that are professional and impartial. This is a very old problem; in the classical literature it is framed as “who will guard the guardians?” This is not a racial problem; it is a societal problem.

While we consider deaths resulting from engagements with police, we should keep in mind that police officers charged with addressing criminal acts and dangerous situations are at risk. Their job is to defend the law and protect the law-abiding public. In the course of their duties, 47 American police officers were fatally shot during 2018.

In 2018, there were 2,925 blacks murdered. Who murdered them? Twenty-six hundred (2600), or 89%, of them were murdered by other blacks. Two hundred and thirty-four (234), or 8%, were killed by whites; 91, or 3%, were killed by other or unknown races. In contrast, of the 3,315 whites murdered, 514, or 16%, were killed by African Americans. Blacks thus killed twice as many whites as whites killed blacks. So, the BLMO claim that blacks are being targeted for death by whites is at the least refuted, and arguably is the opposite of reality.

The BLMF in claiming that African Americans are under attack by police and whites are engaged in misdirection to distract attention from the real social pathology of black-on-black crime. The black population of 13% of all Americans is the victim of 45% of all murders, almost all by other blacks. This is a murder rate three times higher than the black population size. But the BLMF does not wish to address this, and prefers to blame others, claiming falsely that blacks suffer from “systemic racism.” What blacks really suffer from is a tsunami of violent crime. Why the BLMF lies?

As the BLMF wishes to hide the true problems of African Americans, it takes no interest in the reasons for the black-on-black crime wave. Understanding and explaining crime is by no means simple, but there are influential factors that are clearly involved. One is black culture, especially black culture of the inner cities, just as Nick Pilgrim convincingly argues in his book, Black Culture Matters: Why It’s Time to Stop Pretending Racism Is the Problem. Culture is the shared assumptions, understandings, hopes, fears, and expectations. Most important, it is an influence on the decisions that people make.

The other factor I would identify as contributing to the high crime rate from which African Americans suffer is politics. All large American cities with terrible crime rates, with shootings and blood in the streets common—Washington, Baltimore, Philadelphia, New York, Chicago, Los Angeles—are all governed by corrupt Democrat politicians, and have been governed by Democrats for decades. These politicians do not live in the inner city, and seem to be very comfortable with the suffering of the citizens that they nominally govern. Over the decades they have done nothing to correct this most basic problem.

The Black Lives Matter Foundation does not seek to reduce the crime wave in black communities. There is one clear way to do so: bring into the threatened communities more police. We know this works because when it was done in NY under previous mayors the crime rate was reduced: “Between 1990 and 1999, homicide dropped 73 percent, burglary 66 percent, assault 40 percent, robbery 67 percent, and vehicle hoists 73 percent.”

What stops crime? “The police measure that most consistently reduces crime is the arrest rate of those involved in crime, the study finds. Felony arrest rates (except for motor vehicle thefts) rose 50 to 70 percent in the 1990s. When arrests of burglars increased 10 percent, the number of burglaries fell 2.7 to 3.2 percent. When the arrest rate of robbers rose 10 percent, the number of robberies fell 5.7 to 5.9 percent. In the case of murder, the decline was 3.9 to 4 percent; in the case of assault, 2 to 2.4 percent; and for motor vehicle theft, 5 to 5.1 percent.”

BLMF and its supporters have exactly the opposite idea: defund and disband the police! We have recently seen how well this works: the “Ferguson Effect,” when the police in Baltimore, Chicago, and elsewhere were attacked by local politicians, leaving police reluctant to act, was that murder and other violent crimes skyrocketed. In June 2020, mere calls for defunding and disbanding the police by BLMF supporters has led to a doubling of murders in NYC. Disband the police? How will that affect life in the inner cities, with criminals given a free hand? What could go wrong?

The Black Lives Matter Foundation is not at all concerned about black lives, or with black livelihoods, as the BLMF riots, looting, arson, and murders made clear; it is concerned exclusively with black power, its own black power. Many who are drawn to the morality of caring about black lives have become useful idiots for the BLM Foundation, which wants all of us kneel down before it. This is not even reverse racism; it is sheer stupidity. BLM Foundation has nothing constructive to propose, and fuels race animosity to advance its own power grab.