T. Belman. Mr Jacobsen is a law professer at Cornell U.  He writes,

Similarily there is an effort to get Tucker Carson shut down for also telling the truth about BLM. 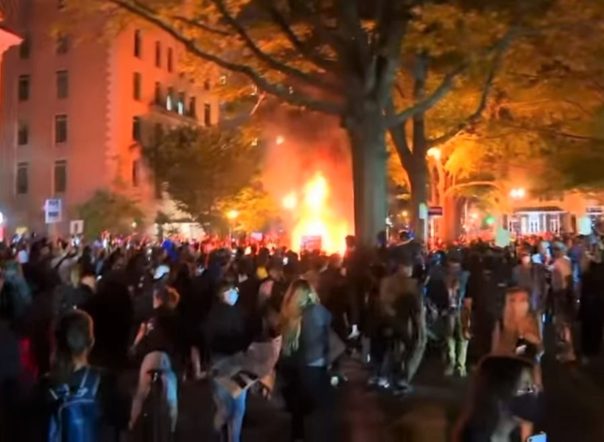 The fury vented on the streets is not about George Floyd, his death was the spark but the fire has been planned for two generations.

I haven’t had much time to reflect on the looting and riots that swept mostly (but not exclusively) large Democrat cities. It was a wilding on a scale we’ve never seen. It was a bloodletting and release of criminal fury.

We should be clear what is happening. It is not protest over the death of George Floyd. That is the spark, but not the fire.

This has been a long time coming. At least a generation, maybe two. The left methodically has taken control of key institutions to implement an anti-American, anti-Capitalist agenda.

You send your kids to public schools and college, where they are taught from their earliest years that America and capitalism are the sources of evil in the world, that we are a systemically racist society that consumes ‘black and brown bodies,’ while socialist and communist systems are more equal and fair. It’s all a lie, but it’s a lie told by the teachers, professors, and administrators with power. The real racists are the people who obsess about race, and who judge people based on the color of their skin.

When your kids emerge from the social justice warfare meat grinder, you don’t recognize them anymore. Oh well, you shrug.

There is a concerted effort funded by leftist billionaires and high tech companies to control what you can say, and to silence you through mob action or social media throttling if you get out of line. The large corporate media, with only a couple of exceptions, is thoroughly corrupt and works every day to elect their preferred candidates, always Democrats.

The law enforcement system is being undermined by district attorneys funded by George Soros whose agenda is to prevent enforcement of laws, and politicians whose goal is to see those arrested released immediately without bail. We’re seeing that right now with rioters and looters almost immediately released. The next push is to defund the police.

We still have the vote and can win elections, despite the disadvantage. But it’s not a guarantee. Which is why the left wants to subvert voting integrity.

All this time, you have seen bits and pieces, and figured that while you might not agree, it wasn’t a threat to our existence.

The wilding and looting should be your wake up call. When seconds counted, the police were pulled back by the policitians.

The goal is to destroy capitalism, and to seek revenge. The Black Lives Matter movement, founded based on fraudulent narratives of the Trayvon Martin and Michael Brown cases, is led by anti-American, anti-capitalist activists. They have concocted a false narrative of mass murder of Blacks at the hands of police, when the statistics show otherwise. They will exploit George Floyd’s death mercilessly to drive that agenda. And they will have some success, because all the institutions listed above are behind them.

There are short term things that can be done, but it depends on the federal government because in the Democrat states where most of the violence took place, the politicians are part of the problem. There needs to be a massive and relentless tracking down of the people who helped coordinate the violence. It needs to start right now. Of course, it will stop on a dime if Joe Biden is elected, but it needs to be started. It should not take more than 2-3 months to accomplish this, and it will take the key criminals off the street in the federal system where activist District Attorney’s can’t interfere.

Democrat states and cities are in a bad way financially due to their own mismanagement of their economies and their tolerance of rioters and looters. They all will be seeking federal bailouts. Just say no, unless there is structural change.

But these are just a short term actions that will not change the rot in our institutions. I wish I had a long-term solution. That’s something that needs to be discussed in the coming weeks.