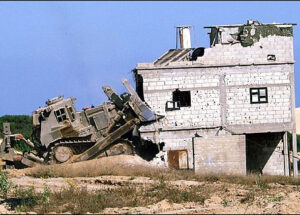 EXECUTIVE SUMMARY: The skewed reporting of housing demolitions in the West Bank is yet another tool with which the EU engages in blatant discrimination against Israel. But does it help the Palestinians? Readily available information on such demolitions suggests that the EU’s bias hurts them more than it benefits them.

Entering the phrase “housing demolitions” in the EU’s official site yields a shocking result: 18 of the first documents to appear concern Israeli demolitions of Palestinian homes in the West Bank. In other words, 80% of the EU’s reports on this worldwide phenomenon involve a population and an area less that one-tenth of 1% of the world’s population or landmass.

To fully absorb how warped this result is, one must recognize that housing demolitions and evictions are a global phenomenon that is sometimes carried out in accordance with deliberate policies to discriminate against minorities. A report by the EU itself, albeit from 2005, acknowledged widespread discrimination via housing demolitions and evictions within the Union against Gypsy, Roma, and Sinti populations in countries as varied as Italy, Ireland, Greece, and Portugal. These countries do not provide figures on the relative use of this tool between minority and majority groups.

Punitive or discriminatory housing demolition occurs around the world. India accuses Pakistan of the practice in Hindu areas in Pakistan’s Punjab, and Pakistan claims that India does the same to India’s Muslim citizens. Egypt has been criticized for evicting thousands of Bedouin to clear a path for housing projects for Egyptians outside Sinai in the peninsula. The Kurdish government has evicted Sunnis from Kurdish areas, and local newspapers in the US frequently report evictions and demolitions of the homes of minorities, especially Blacks and Native Americans, in the name of urban renewal. The list of countries that practice housing demolition is almost as long as the list of member states in the UN.

The difference is that one has to dig deep into the EU archives to find any mention of discriminatory housing demolition and evictions anywhere other than in Israel. The EU’s limelight focuses almost exclusively on the Jewish State.

Though the EU always claims it is impartial, a simple Google search demonstrates that that is a falsehood. The search produces long lists of links to pieces on housing demolitions in the West Bank or among the Negev Bedouin—pieces that are churned out by human rights groups supported either directly by the EU, by member states, or both. Thus, Google (and other new media) become tools with which the EU condemns Israel in a blatantly partial and unfair way.

Both the EU and the organizations they finance in their battle against Israel are loath to report that there are three times more housing evictions proportionately in member states of the EU on average than the people rendered homeless from Israeli housing demolitions in the West Bank. In 2017, there was over one eviction per 1,000 Europeans (705,000 evictions in total). In the West Bank there was one eviction per 3,000 Palestinians.

But it’s not only a matter of numbers. The accusations leveled against Israel are alarming. “Demolitions of housing and livelihood and forced evictions are causing severe poverty,” one EU-funded report stated, overlooking the fact that the 1,405 demolitions that have taken place since 2006 account for a mere one-quarter of 1% of the total number of 515,300 dwellings in the West Bank. Demolitions hardly explain widespread poverty in any part of the area.

In any event, new (and mostly illegal) Palestinian housing construction dwarfs housing demolitions. An annual figure of 8,690 housing units are being constructed against 108 demolitions, many of which involve sealing off only parts of the unit, according to data extrapolated from the Palestinian Central Bureau of Statistics and provided by B’Tselem, an Israeli human rights organization funded by the EU and dedicated “to ending the occupation.”

Ironically, the EU’s pressure on Israel not to demolish homes, which probably explains the relative infrequency of housing demolitions in the West Bank, harms rather than promotes the welfare of the Palestinian inhabitants.

A telling example is Ras Shahadah and the illegal building of hundreds of apartment buildings in northern Jerusalem. This project was funded to create a residential continuity between the southern and northern parts of the West Bank and thwart Israeli plans to construct the E-1 neighborhood, which would create a residential continuity between Maaleh Adumim and Jerusalem.

Palestinian reports indicate that an ecological disaster is unfolding as attempts are made to reduce infrastructure costs in Ras Shahada. They address the serious problems of a lack of travel arteries and green spaces, as well as the proximity of the buildings to one another—a particularly worrisome aspect, as an earthquake of any magnitude could devastate the area.

For the EU, neither impartiality nor the welfare of Palestinian citizens matters. What counts is taking whatever measures are most likely to create a Palestinian state that will be perennially divided between a one-party fiefdom in the West Bank and another one-party state in Gaza governed by fundamentalists.

The EU apparently believes that this is what the world really needs: another failed state like Lebanon. If that requires blatantly biased reporting of housing demolitions (among many other things) as part of demonizing Israel, so be it.

Prof. Hillel Frisch is a professor of political studies and Middle East studies at Bar-Ilan University and a senior research associate at the Begin-Sadat Center for Strategic Studies.