About 2,500 Americans staff base near Riyadh, launching F-15s and manning Patriot missile batteries, despite history of Islamist opposition

PRINCE SULTAN AIR BASE, Saudi Arabia—Nearly 17 years after U.S. troops largely pulled up stakes from the kingdom, the U.S. is now back in force. 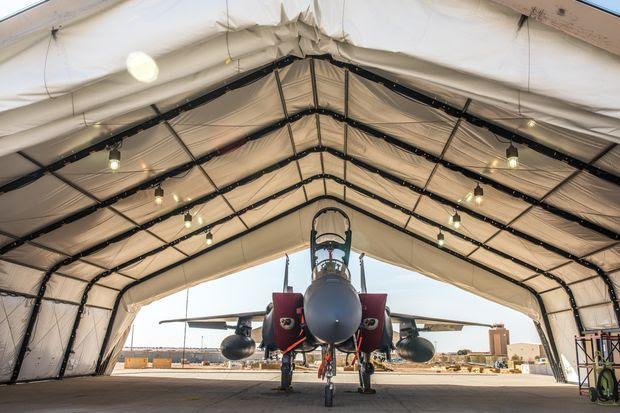 A jet of the F-15E Strike Eagle Squadron, which is flying missions against Islamic State over Iraq and Syria. The squadron has moved to the base from the neighboring U.A.E.

Here in a base of tents in the desert about 60 miles southeast of Riyadh, some 2,500 U.S. military personnel are launching F-15 fighter jets in soaring arcs overhead and manning Patriot missile batteries in shifts. Or they play chess and video games to pass the hours, with an NFL-themed video game splashed on a flat-screen TV inside a recreation tent.

The return of the U.S. troops—after maintaining a much smaller footprint for nearly two decades—reflects the alarm of Saudi and American leaders at the current threat posed by another regional power: Iran.

“We face a thinking enemy that is playing a real regional conflict for keeps, and they’re very good,” said Gen. John Walker, the commander of the 378th Air Expeditionary Wing at the base.

The U.S. deployment at Prince Sultan highlights the changing shape of the American military presence in the surrounding region amid President Trump’s policy of confrontation with Iran and decision to withdraw some forces from Syria. Though Mr. Trump has vowed to disengage from the Middle East, he has sent thousands of additional soldiers to the region.

U.S. forces were last stationed at the base in 2003, more than a decade after the U.S. sent more than a half million American troops to protect the kingdom following Saddam Hussein’s invasion of Kuwait in 1990. Osama bin Laden, who opposed the deployment of U.S. soldiers in the country that hosts Islam’s two holiest sites, launched a campaign of attacks on government and Western targets in the kingdom. In 1996, a bombing at a housing complex also killed 19 members of the U.S. Air Force. Although American authorities later blamed the attack on Iran, bin Laden praised the attack at the time.

The U.S. military presence in Saudi Arabia was a huge recruiting device for al Qaeda.

“The wind and the dust are the same,” he said.

The U.S. withdrew most of its forces from Saudi Arabia following the U.S.-led invasion of Iraq that ousted Saddam Hussein, closing a fraught chapter in American-Saudi relations. The U.S. military moved its regional center of gravity to neighboring Qatar, much to the relief of Saudi leaders who were freed from the burden of hosting an unpopular foreign military force.

“Their presence there over the last 12 years has been a source of enormous difficulty for a friendly government,” Deputy Secretary of Defense Paul Wolfowitz said at the time of the withdrawal, according to an interview with Vanity Fair magazine. “It’s been a huge recruiting device for al Qaeda.” 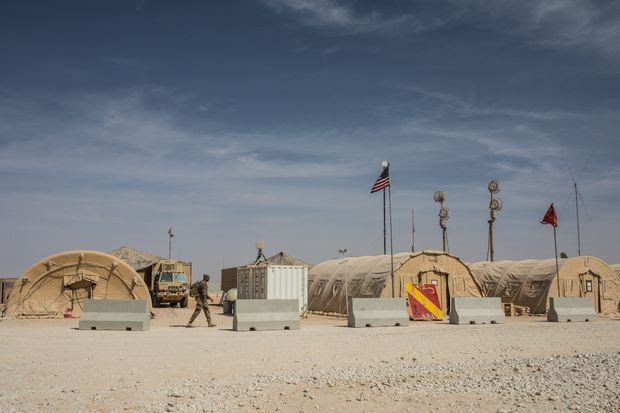 A man walks past U.S. military tents at the base, where U.S. forces were last stationed in 2003.

The Saudis’ relief at being rid of the Americans recently turned to concern about being without them.

Central to the American forces’ mission now in Saudi Arabia is to prevent a repeat of attacks from Iran, such as the missile and drone strike in September 2019 on Saudi oil facilities that temporarily crippled the kingdom’s petroleum production, threatening global supplies. U.S. and Saudi officials blamed Iran for the attack, but the Iranian government has denied involvement.

The attack, which involved both drones and cruise missiles, struck two sites simultaneously at Abqaiq and Khurais in eastern Saudi Arabia.

U.S. defense officials now say they have shored up Saudi air defenses to the extent that they could prevent an airstrike like the one in September, thanks in part to the deployment of four American Patriot missile batteries in Saudi Arabia, including two stationed at Prince Sultan. Yet defense officials acknowledge that Patriot missiles, which cost millions of dollars, are an expensive tool to parry cheaper cruise missiles or drones. 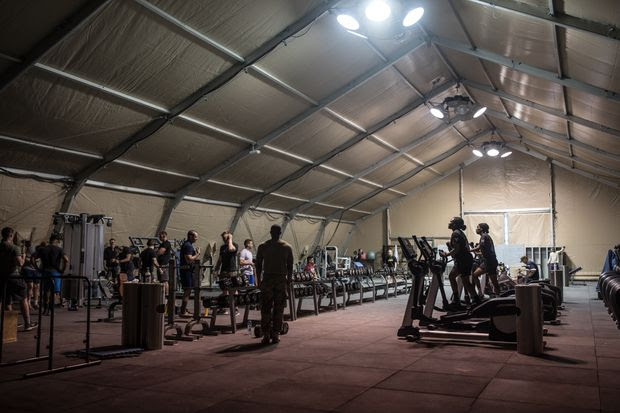 Personnel work out in a gym in the base. U.S. troops’ return suggests the Saudi leadership is confident it can avoid a repeat of the extremism that flared last time it hosted American forces.

Patriots are designed to counter high-flying ballistic missiles, rather than the lower-flying cruise missiles and drones used in the September airstrike on Saudi oil installations. In the 1991 Gulf war, the U.S. sent the air-defense batteries to the kingdom, where they struggled to shoot down Iraq’s Scud missiles.

An F-15 squadron stationed at the base—and now flying missions against Islamic State over Iraq and Syria—has been moved in from the neighboring United Arab Emirates. Other personnel at the base have been sent here after moving out of Syria following President Trump’s partial withdrawal of troops from the country in 2019.

The return of U.S. troops suggests the Saudi leadership is confident it can avoid a repeat of the extremism that flared last time it hosted American forces. A government campaign against al Qaeda networks in the kingdom included placing thousands of people in a deradicalization program.

Crown Prince Mohammed bin Salman has also sought to introduce social change like granting women the right to drive, even as his government has arrested activists who campaigned for that right. He has allowed the introduction of movie theaters and brought in Western entertainment ranging from Mariah Carey to professional wrestling matches—all in an attempt to change cultural norms and project a more modern image of his country.

The crown prince’s government has also arrested numerous people identified with the conservative religious establishment. It has also used the fight against extremism to arrest mainstream critics of the government, including religious leaders who advocated for reform and opposed radicalism. Anti-American sentiments are far from extinct in Saudi Arabia. 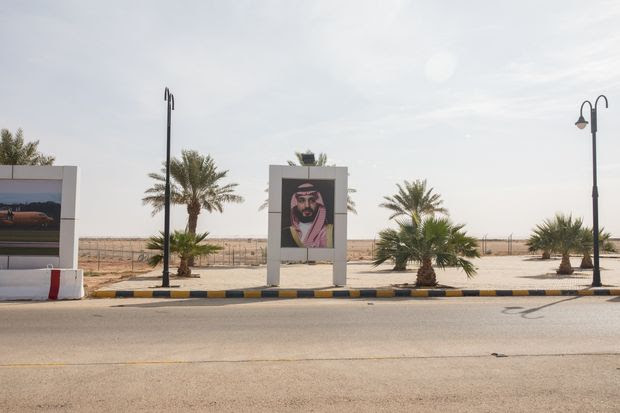 A poster shows Crown Prince Mohammed at the entrance to the base. His government has said little about the U.S. deployment beyond short statements announcing the soldiers’ arrival last year.

In December, a Saudi trainee on a military base in Florida shot and killed three people after expressing anti-American views on social media. The Department of Defense later expelled 16 Saudis from a training program after an investigation found some of them had ties to extremist movements.

The Saudi government has said little about the American deployment beyond short official statements announcing the soldiers’ arrival last year. Many Saudi citizens say they support the return of U.S. soldiers.

“I am confident that it makes Saudi Arabia safer,” said Susan Ismail, 55, a retired media consultant in Jeddah.

At the moment, the American encampment at Prince Sultan remains a basic outpost. The Saudis have built a road to service the American section of the base, while the Americans are installing electricity for new tents, and replacing some tents with trailers.

In January, following the U.S. airstrike that killed senior Iranian general Qassem Soleimani in Iraq, the Americans at Prince Sultan rushed to complete a security barrier around the perimeter of the base, fearing possible Iranian retaliation. Men and women serve lunch to their colleagues at the base.

The soldiers, pilots, missile operators and others at the base say they are focused on their mission and on their daily reality. At the main camp that serves as a living quarters, soldiers in tan uniforms shuffle among rows of identical tan tents. At midday, they form a long line waiting for lunch. There is pasta, rice, and vegetables, but no meat, the result of a hiccup in the supply chain to the remote base.

How long the Americans will stay will depend on a variety of factors, ranging from political decisions in Washington to the military’s own estimations of its need to project forces around the region.

“The Kingdom of Saudi Arabia of today is very different than it was 20 years ago,” said Gen. Walker. “The policies and the society have changed for the better.”

—Donna Abdulaziz in Jeddah, Saudi Arabia, contributed to this article.