One of the dumber controversies surrounding the Wuhan coronavirus pandemic is the rhetorical battle over whether it’s “racist” or “xenophobic” to name and refer to the disease after the place it originated. Just today, President Trump began his press conference by discussing the all-hands-on-deck fight against the “Chinese virus.” This is the correct response to a tertiary and unserious question:

Q: “Why do you keep calling this the Chinese Virus?”

President Trump: “It comes from China…it’s not racist.” 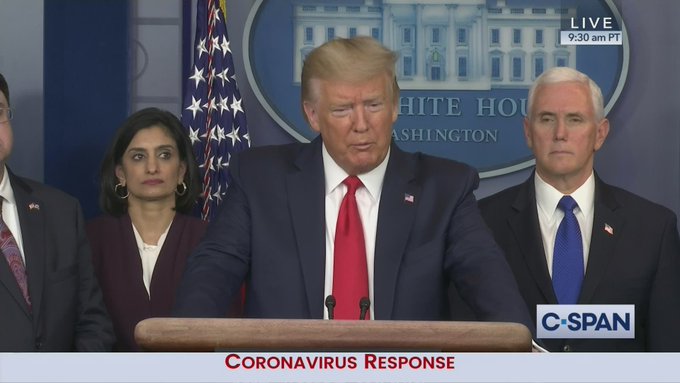 As many others have noted in recent days, this practice has been going on for many years. It’s not bigotry on parade; it’s an intuitive linguistic shortcut. My general sense was that people ardently demanding that the virus’ moniker directly mention China as ostentatiously as possible were looking to pin blame on an adversary abroad, while minimizing the fault of the US government — and that those who were crying bigotry (including, embarrassingly, major US officials and the World Health Organization) were leaning on impotent wokeness as a crutch to channel frustration and outrage.<
>

Given the Chinese government’s disgraceful and documented efforts to lie about what happened and assign bogus responsibility, blaming Beijing is the affirmatively correct and needed course of action. The truth must be defended and preserved, both for the present moment and for the historical record. And the truth is extremely damning for the Chinese Communist Party. David Harsanyi at National Review has written a scathing piece on this front that is worth your attention:

Early on, the Communists destroyed samples and suppressed vital information that could have helped mitigate the damage of this new strain of coronavirus. The government also silenced doctors who warned about the disease. Some were censured for “spreading rumors” or sharing test results with colleagues, and some were forced to write a self-critical public letters — a Marxist mainstay — admitting that the warning “had a negative impact.” The Chinese Communists probably let five million people leave Wuhan without screening, according to the Wall Street Journal. The Chinese Communists, like all Communists, hide their societal problems. There is no crime, disease, or addiction in the collectivist state. This kind of secrecy and dishonesty can be disastrous, especially in a highly interconnected world…

…The Chinese regime is perfectly capable of administering an array of authoritarian policies to suppress the rights of its own people. But it’s apparently unable to exert even mild cultural pressure warning them that their eating habits can be extraordinarily dangerous, and hold the potential of creating massive socioeconomic problems. If reports are correct, it was in Wuhan’s popular “wet markets” that vendors were selling the bats — and possibly snakes — that may have caused the COVID-19 outbreak. “Wet” because the meat sold in its unsanitary stalls was only recently slaughtered. This kind of thing happens quite often. And not always in China, of course. But the avian influenza was likely transmitted to humans from chickens in a “wet” market. Scientists have been warning for years that the eating of exotic animals in southern China “is a time bomb.” Acute respiratory syndrome (SARS) also originated in China, and probably jumped to humans through bats. Other coronavirus strains are also likely connected to bats.

Harsanyi also makes the essential point of distinguishing the Communist Chinese government from Chinese people: “It’s important to stress that it’s not the Chinese people who are the problem. Just look at their success in Taiwan, Hong Kong, Singapore, or the United States. The ChiComs are the problem. If the Chinese government spent as much time working on educating its people and regulating dangerous markets as it does on secrecy and propaganda efforts, maybe it wouldn’t have to worry as much about diseases being named after it — or about the catastrophic death and economic pain their negligence helps cause.”  In a sane world, this would put to bed any foolish chatter about “racism.” Meanwhile, let’s unpack additional details of Beijing’s culpability:

A Wuhan lab that identified COVID-19 as a highly contagious pathogen in late December was ordered by local officials to stop tests and destroy samples. Beijing is now scrambling to censor the story https://www.thetimes.co.uk/article/chinese-scientists-destroyed-proof-of-virus-in-december-rz055qjnj …

Chinese laboratories identified a mystery virus as a highly infectious new pathogen by late December last year, but they were ordered to stop tests, destroy samples and suppress the news, a Chinese

Chinese laboratories identified a mystery virus as a highly infectious new pathogen by late December last year, but they were ordered to stop tests, destroy samples and suppress the news, a Chinese media outlet has revealed. A regional health official in Wuhan, centre of the outbreak, demanded the destruction of the lab samples that established the cause of unexplained viral pneumonia on January 1. China did not acknowledge there was human-to-human transmission until more than three weeks later. The detailed revelations by Caixin Global, a respected independent publication, provide the clearest evidence yet of the scale of the cover-up in the crucial early weeks when the opportunity was lost to control the outbreak. Censors have been rapidly deleting the report from the Chinese internet.

A recent study determined that if the Chinese government had listened to an early whistleblower and quickly initiated containment efforts, rather than punishing and censoring the information, cases in their country could have been reduced by up to 95 percent: “The early detection and isolation of cases was estimated to prevent more infections than travel restrictions and contact reductions, but integrated NPIs would achieve the strongest and most rapid effect. If NPIs could have been conducted one week, two weeks, or three weeks earlier in China, cases could have been reduced by 66%, 86%, and 95%, respectively, together with significantly reducing the number of affected areas.” And now, of course, China is expelling American journalists because they’ve been telling the truth, in order to prevent additional truth telling. This calls into question all sorts of aspects of Beijing’s public claims about data and ongoing measures. Their propaganda outlets cannot be trusted:

China is expelling all American journalists w/the NYT, WSJ & WaPo — myself included. So many feelings, but I keep coming back to my last trip, to Wuhan, where ppl were so willing to talk – they wanted the world to know what was happening to them and to hold their govt accountable https://twitter.com/amyyqin/status/1223279662127706113 …

Just arrived in Wuhan, the epicenter of the coronavirus outbreak, which has been under lockdown for more than a week now. The mood among locals: anxiety, flashes of anger & frustration, and extreme boredom. Here I am getting my temperature measured in a hotel lobby.

r @nytimes @washingtonpost @wsj @TIME & @VOANews can’t hide they are directly responsible for the size & severity of the pandemic coronavirus. They keep power by restricting access to info & the whole world is paying the price. https://www.washingtonexaminer.com/news/china-pulls-credentials-from-journalists-working-for-new-york-times-washington-post-wall-street-journal-time-and-voa …

The virus originated in China, likely because of extremely unsanitary market conditions. Then the Communist Chinese government attacked and silenced doctors and others who were sounding the alarm, destroyed and covered-up evidence, and are actively censoring media coverage of their death-causing actions. Americans, and especially American journalists, should resist the urge to parrot CCP propaganda talking points because it makes it easier to blame domestic politicians they don’t like. We are living through another grave legacy of Communism. That won’t do much to help alleviate our current immense health and economic challenges, and it doesn’t absolve western leaders of any accountability for poor decisions, but it’s still the truth. And when this is all over, these empirical facts must not be whitewashed or forgotten. They lied and they refused help in critical early days. I’ll leave you with these flashbacks: