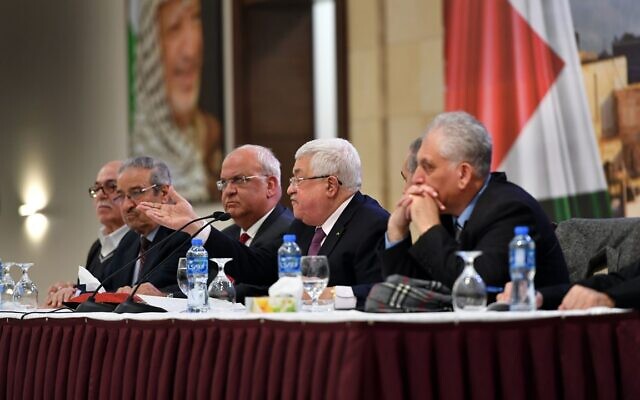 Palestinian Authority President Mahmoud Abbas firmly rejected the Trump administration’s plan to resolve the Israeli-Palestinian conflict on Tuesday, calling it the “the slap of the century.”

Abbas addressed the plan in a speech to senior Palestinian leaders, including representatives of the Hamas and Islamic Jihad terror groups, at the PA presidential headquarters in Ramallah.

“We say a thousand times: No, no and no to the ‘deal of the century,’” Abbas said, adding that the US plan “will not come to pass” and that “our people will send it to the dustbins of history.”

“We just heard President Trump and Israeli Prime Minister Netanyahu talking about the slap of the century. If God wills, we will strike them back with slaps,” he said.

Abbas spoke about an hour and a half after US President Donald Trump released the plan alongside Prime Minister Benjamin Netanyahu at the White House.

Breaking with past US administrations, the plan envisions the creation of a Palestinian state in about 70% of the West Bank, a small handful of neighborhoods in East Jerusalem, most of the Gaza Strip and some areas of southern Israel on condition that the Palestinians recognize Israel as a Jewish state and Hamas and other terror groups in the Gaza Strip disarm.

The plan also calls for allowing Israel to annex settlements, granting the Jewish state sovereignty over the Jordan Valley and overriding security control west of the Jordan River, and barring Palestinians from entering Israel as refugees.

Abbas declared that “Jerusalem is not for sale” and the Palestinian people’s “rights are not for sale or bartering.”

“Will we accept a state without Jerusalem? It is impossible for any Palestinian, Arab, Muslim or Christian child to accept that,” he said. 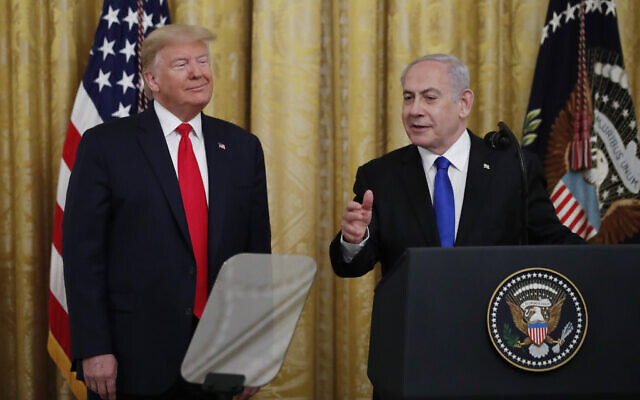 Israeli Prime Minister Benjamin Netanyahu speaks during an event with President Donald Trump in the East Room of the White House in Washington, Tuesday, Jan. 28, 2020, to announce the Trump administration’s much-anticipated plan to resolve the Israeli-Palestinian conflict. (AP Photo/Alex Brandon)

The Palestinians have long demanded the establishment of an independent and sovereign Palestinian state along 1967 lines with East Jerusalem as its capital.

The plan outlines a Palestinian capital in neighborhoods in Jerusalem and the West Bank situated on the side of the security barrier currently adjacent to areas under full or partial Palestinian control.

Abbas added that the Palestinians “are committed to fighting terrorism, but the world must understand that this people deserves a life.”

“We say to the world: We are not a terrorist people and we will never be one,” he said.

Since late 2017, the Trump administration has made several moves seen as marginalizing the Palestinians: recognizing Jerusalem as Israel’s capital, moving the US embassy from Tel Aviv to Jerusalem, cutting hundreds of millions of dollars in aid to the Palestinians and the UN agency that supports Palestinian refugees, and closing the Palestine Liberation Organization representative office in Washington.

In response, the Palestinians have cut off ties with both the White House and the US State Department, but they have continued to communicate with American security officials.

Abbas also said that the Palestinians would immediately begin taking measures to change “the [Palestinian] Authority’s functional role” in order to implement recommendations made by PLO institutions over the past couple of years.

The Palestinian Central Council and the Palestinian National Council, top PLO bodies, issued a number of recommendations in 2018 and 2019 including calls for ending security cooperation with Israel.

Abbas did not clarify what explicit measures the Palestinians would take, or whether they would do away with agreements with Israel or put an end to security coordination between Israeli and Palestinian security forces.

The Palestinians have frequently threatened to renege on agreements with Israel in response to previous disagreements, but have yet to follow through.

Hamas and Islamic Jihad also quickly rejected the plan on Tuesday. Many Palestinians protested around the West Bank and Gaza, as the US embassy issued a travel advisory warning of potential terror attacks.

Before Trump spoke on Tuesday, Abbas held a rare phone call with Hamas head Ismail Haniyeh, in which they advocated for Palestinians standing together to “confront” the plan, the official PA news site Wafa reported. Abbas’s Fatah faction has been at loggerheads with Hamas for over a decade.