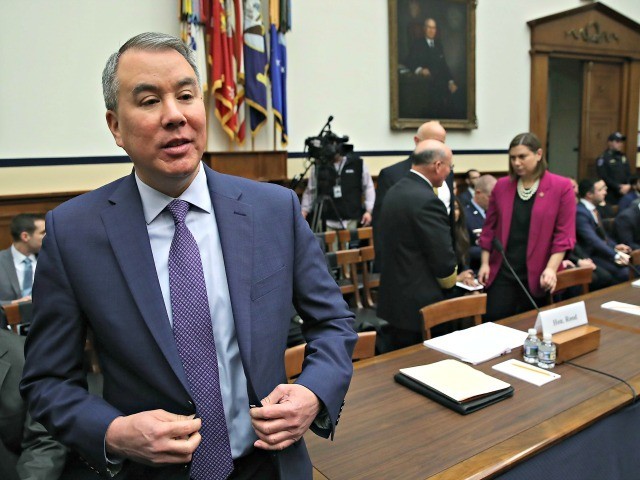 President Trump’s firing of John Rood, the top policy official at the Pentagon, is a sign the agency is not immune from an effort to purge from influential positions across the administration “snakes” who do not support the president, according to four current and former officials.
Rood had been on the chopping block for months, but his firing just last week amid a spate of other personnel changes shows that the president is finally ready to clean house at a department that has tried to distance itself from politics, they said.

“All of them are getting tossed,” a senior administration official told Breitbart News. “You’re either on the team or you’re out, everywhere.”

Political appointees like Rood serve the administration and at the president’s prerogative. However, it was well-known at the Pentagon and beyond that Rood was not a supporter of the president.

“Plenty of people from the transition and at the National Security Council knew Rood was not playing on the same team as the president when it came to policy or personnel,” a defense official told Breitbart News after his firing. “Complaints have made it to the highest levels at the White House for awhile now.”

At at least two meetings he held for staff, Rood spoke profusely and glowingly about the late Sen. John McCain, but did not once mention the president, according to the defense official.

At his first town hall, he spoke about attending McCain’s funeral in Arizona and how Amber Alert signs on the highway were flashing in memorial for McCain, and how much both he and the American people loved him.

The second town hall was after Mattis issued his resignation letter. That evening, he called an all-hands meeting and spoke of how great Mattis was, how he was a man of honor like McCain, and what a privilege it was to work with Mattis. He then passed around copies of Mattis’s resignation letter and said that the Pentagon would continue implementing Mattis’s defense strategy.

“Never once mentioned Trump,” the defense official said. “The message was clearly Mattis and McCain are great and our president isn’t.”

But it was not just Rood’s dislike of the president that did him in. The current and former officials said Rood slow-rolled implementing the president’s defense policies on practically everything.

“Name it,” said one administration official, when asked which policies he slow-rolled.

One former administration official told Breitbart News the U.S. could have done a lot more to help Venezuelan opposition leader Juan Guaidó, but that Rood effectively stopped it. The former official also said Rood slow-rolled pressuring South Korea and Japan to pay more for the stationing of U.S. troops there — a top priority of the president’s.

CNN — who first noted Rood’s departure — reported that Rood was skeptical about peace talks with the Taliban as well as the president’s decision to scale down military exercises with South Korea during talks with North Korea.

The New York Times reported that Rood also clashed with the president on his designation of Iran’s Islamic Revolutionary Guard Corps as a foreign terrorist organization. The Washington Post reported that Rood was reluctant to provide the White House with plans for a possible withdrawal of U.S. forces from Syria.

CNN and other outlets reported that Rood’s firing may have had something to do with his support for military assistance for Ukraine, which the White House temporarily froze last year. But the Pentagon has publicly pushed back hard against that notion.

Officials said Rood also blocked pro-Trump people from coming into the Pentagon at the same time he left numerous vacancies that needed to be filled.

Two defense officials said Rood put Trulio up for the position of Assistant Secretary of Defense for International Security Affairs, even though Wheelbarger, who is currently performing the duties of that position, was up for the job.

There were other issues with Rood, such as his management style and a horrible relationship with Congress, officials said.

“Rood was not a leader and did nothing to strengthen the organization,” the first defense official said. “Neither the career staff nor the politicals thought much of him. With Rood there was a leadership vacuum. He couldn’t manage his way out of a paper bag.”

“The president is better served with the under secretary position being left unfilled than having a snake like Rood in there,” the official added.

Rood was hired for the position in January 2018 by former Defense Secretary Jim Mattis. Mattis infamously tried to bring in Democrats to the Pentagon for senior policy positions — Michele Flournoy as deputy defense secretary and Anne Patterson as under secretary of defense for policy, the position that Rood eventually filled.

Before coming to the Pentagon, Rood served as a vice president at Lockheed Martin. He previously served at the CIA, the NSC, and as a Senate staff member and adviser to former Sen. Jon Kyl (R-AZ).

A woman claiming to be a friend of Rood tweeted after news of his firing:

John Rood, who I am delighted to know personally, is a man of integrity and principles. He had serious misgivings about joining the Trump administration, leaving behind a very good career at Lockheed, but he has survived with his integrity intact. I wish him well.

The former administration official confirmed there had been complaints about Rood to the White House for awhile, but Esper “didn’t do anything.” “After so many complaints, the president did it himself,” the former official said.

Indeed, Rood made it clear in his resignation letter that the decision had come directly from the president. “It’s my understanding from Secretary Esper that you requested my resignation,” he began his letter.

One former official fretted to the Post: “Very few Mattis people are left, which means very few people to push back.”

The second administration official who spoke to Breitbart News conceded that not all of the slow-rolling was entirely bad, however. The official said it prevented progress on things that could have worsened military tensions with Iran, particularly under former National Security Adviser John Bolton.

And the official also said frustration with Rood caused some officials to leave, including some Never Trumpers.

The second defense official said there is a sense of a “reckoning coming” for those who do not support the president or are trying to undermine his policies.

The second administration official pointed to the recent firing of the entire White House Presidential Personnel Office (PPO), which is responsible for administration appointments and all the “Never Trumpers” who managed to get in, as a sign, and confirmed a recent Axios report that Never Trumpers are to be either purged or not promoted by shifting them to a different agency.

The second administration official suggested the Johnny McEntee, the new leader of PPO, has his work cut out for him at the Pentagon. The official called the Pentagon “the problem child,” in terms of agencies that have not supported the president.

There have been a number of Never Trumpers in senior positions at the Pentagon throughout the president’s tenure, including some who have already left, the official said.

The Pentagon did not respond to a request for comment.