T. Belman. Either Israel has the right to extend her sovereignty or she doesn’t. Israel should not need US permission to claim what is hers legally and historically. So she should go ahead and do it without consent. Trump/Kushner can disagree for their own reasons.  They can withhold their consent until after the elections if they so choose. In that way everybody exercises their rights.  Nothing hinges on Israel being compliant. But I think that both the US and Israel benefit from Israel showing independance.

It is not in Israel’s interest to encourage Abbas to join the process or to show him flexibility. Trump for his own reasons thinks that it enables him to sell the plan. But does it?  Better that he just plow ahead and do it. Don’t let the tail wag the dog.  The more resolve he shows, the more success he will achieve. The more flexibility he shows, the more he loses the Israeli Right and the more he gets bogged down in the process

If Israel extends their law to all land and people within the municipal envelopes in the first instance, there should be no technical issues to decide. The technical team can always meet thereafter to decide how much more to enlarge the envelope. 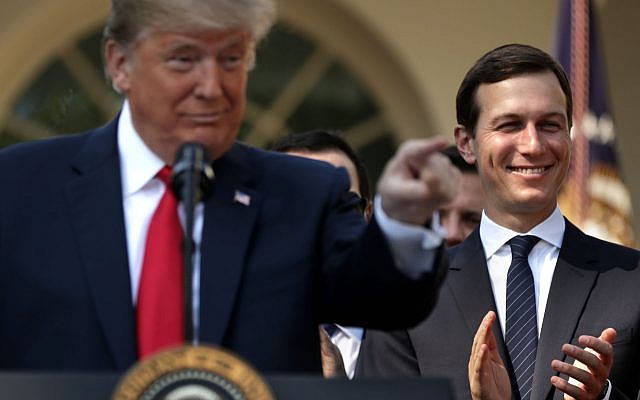 Jared Kushner (R) joins US President Donald Trump as he holds a press conference in the Rose Garden of the White House on October 1, 2018. (Chip Somodevilla/Getty Images via JTA)

A senior US official on Saturday lambasted the Arab League’s rejection of the recently released Trump peace plan, saying in a statement that such dismissals would not benefit the Palestinian people.

“It is only by having a wiliness [sic] to try a new approach that we will make a breakthrough in a conflict that has left the Palestinian people to suffer for decades,” a senior administration official said in a written statement.

“Past Arab League resolutions have placated Palestinian leadership and not led to peace or progress and it is important to try a new approach or the Palestinian people’s fate will not change.” the official added.

The comments from Washington came after the Arab League voted during an emergency meeting in Cairo to unanimously rejected US President Donald Trump’s controversial Middle East plan, calling it “unfair” to Palestinians.

The official attempted to highlight “positive remarks” from some Arab foreign ministers who did not dismiss the peace plan out of hand in speeches before the unanimous vote to totally reject the proposal.

“It is important … to come out with a constructive stance, a realistic stance and a positive strategy that goes beyond just condemnation,” UAE Minister of State for Foreign Affairs Anwar Gargash said, according to Riyadh-based Arab News.

Nonetheless, the Arab League, a pan-Arab bloc of 22 countries, said in its statement Saturday that it “rejects the US-Israeli ‘deal of the century’ considering that it does not meet the minimum rights and aspirations of Palestinian people.”

Arab leaders also vowed “not to… cooperate with the US administration to implement this plan.”

The League warned that Israel must not act on the plan unilaterally — a reference to Israel’s stated intention to move on annexation as soon as possible.

The US proposal would grant the Palestinians a state with restricted sovereignty in Gaza and in parts of the West Bank, while allowing Israel to annex all its settlements and keep nearly all of East Jerusalem.

The Palestinians would control scattered chunks of the West Bank and some neighborhoods on the outskirts of Jerusalem, all linked together by a new network of roads, bridges and tunnels. Israel would control the state’s borders and airspace and maintain overall security authority. Critics of the plan say this would rob Palestinian statehood of any meaning.

Immediately after, Prime Minister Benjamin Netanyahu pledged to bring the issue for a vote in the cabinet on Sunday, but has since backtracked after the US administration indicated that while it does not oppose annexation, it was not ready to see it happen until at least after the coming Israeli elections on March 2.

After initial mixed messages, senior White House adviser Jared Kushner clarified on Thursday that the US would not approve of Israeli annexation efforts before the March election.

Channel 12 news reported that Haspel assured them Washington would seek to prevent Israel from annexing West Bank land before the March 2 election, as Netanyahu has indicated he would like to do. 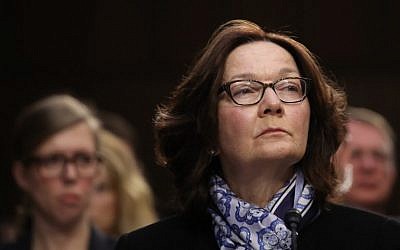 According to Kan TV, Palestinian officials told Haspel they would not cut security ties with US agencies. The network also reported that Haspel met with Israeli officials during her visit but did not provide further details.

There was no official confirmation of Haspel’s visit from Israel, the US or the PA.

Channel 13 on Saturday reported White House officials were surprised by the unanimous rejection of the plan by the Arab League, as several Arab nations had initially voiced cautious support for the proposal.

Oman, Bahrain, Saudi Araba, the United Arab Emirates, Qatar, Egypt and Morocco all issued statements following the release of the plan calling it a welcoming step. But on Saturday all backed the Arab League rejection.

An unnamed Arab diplomat told the Haaretz daily that the US had not fully briefed envoys from Bahrain, the UAE and Oman on the details of the plan before they agreed to attend its unveiling ceremony on Tuesday.

The disappointment with the details of the plan led the three countries to join the other Arab League member states in voting Saturday to reject the plan, he said.

The proposal unveiled Tuesday by US President Donald Trump at the White House on Tuesday recognizes Israel’s rights to the Jordan Valley, all West Bank settlements and their surroundings — some 30% of the West Bank in total. 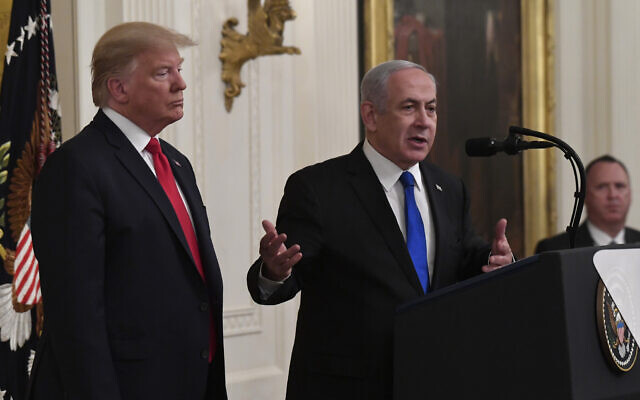 US President Donald Trump, left, listens as Prime Minister Benjamin Netanyahu, right, speaks during an event in the East Room of the White House in Washington, January 28, 2020, to announce the Trump administration’s much-anticipated plan to resolve the Israeli-Palestinian conflict. (AP Photo/Susan Walsh)

Channel 12 reported Saturday that Washington wants Israel to accept the plan in its entirety before it goes ahead with any annexation push — a possibly difficult request, given much of the Israeli right’s refusal to accept the notion of a Palestinian state, no matter how small and non-contiguous it might be.

Nonetheless, the network reported that Netanyahu is planning on bringing the plan before the cabinet soon for a symbolic vote. The measure would be strictly declarative in nature, but Netanyahu is hoping to use the government’s approval to convince Washington to green-light a measure of limited annexation in the West Bank before the election.

On Friday the network reported that Netanyahu is eager to secure backing for a symbolic “mini annexation” in the coming days to appease his right-wing voters after his plans to quickly annex the Jordan Valley and West Bank Jewish settlements were stymied by US opposition.