Before Monday, President Trump kept a low profile regarding the riots. He wasn’t invisible; he just wasn’t putting himself front and center. That changed dramatically on Monday.  Trump scolded governors who allowed rioters to gain control in their states, announced that he would be mobilizing “all available federal resources” to end the riots in Democrat-run cities, and took a historic walk across the street from the White House (which inflamed the Trump haters).

Someone leaked to CBS News audio of a phone call that Trump had with the nation’s governors. In it, in typical Trumpian language, he essentially told them that if they don’t alpha up with the rioters and assert their top-dog status, things are going to get worse. This advice is only common sense, but some unnamed person naturally described Trump’s tone as “unhinged.”

In audio obtained by @CBSNEws, Trump tells governors: “Washington was under very good control, but we’re going to have it under much more control. We’re going to pull in thousands of people.” (more)

One person listening in on the call describes the president’s words and tone as “unhinged.”

On the call, Trump references Joint Chiefs of Staff Chairman Milley and Attorney General Bill Barr. “We will activate Bill Barr and activate him very strongly,” Trump says. MORE: Trump tells governors later: “You’re making a mistake because you’re making yourselves look like fools. And some have done a great job. But a lot of you, it’s not – it’s not a great day for our country.”

(If you really want unhinged, get a load of Biden’s Hollywood-production world in which police, when they see an imminent harm situation, are trained only to shoot people’s legs. To require cops to be sharpshooters in those milliseconds of decision-making, when the only sure shot is a body mass shot, is delusional.)

Following that scolding, Trump announced from the Rose Garden that he’s about to bring law and order back to America. After first acknowledging the miscarriage of justice that led to George Floyd’s death and the lawful, peaceful protests that followed, he turned his attention to the riots, which he attributed to “professional anarchists, violent mobs, arsonists, looters, criminals, rioters, Antifa, and others.” He noted the innocents who have been violently attacked across America, as well as small-business owners whose livelihoods have been destroyed.

Because American cannot sustain this type of destruction and chaos, Trump is mobilizing:

I am mobilizing all available federal resources — civilian and military — to stop the rioting and looting, to end the destruction and arson, and to protect the rights of law-abiding Americans, including your Second Amendment rights.

Effective immediately, if localities refuse to act to protect against rioting, Trump will deploy the United States military, something allowable under the Insurrection Act. Trump is also dispatching soldiers and law enforcement officers to Washington, D.C., where the rioters concentrated their efforts on Sunday night.

Trump also warned the riots’ organizers that they could expect “severe criminal penalties and lengthy sentences in jail.” He especially called out Antifa, which he had earlier declared a terrorist organization.

Following his announcement, Trump walked across the street to St. John’s Church, founded in 1815 and burned in 2020.

I almost can’t believe what I’m seeing. POTUS just walked out the front door of the White House and into Lafayette Square – the epicenter of the DC protests – to visit historic St. John’s Church, which was set on fire last night. 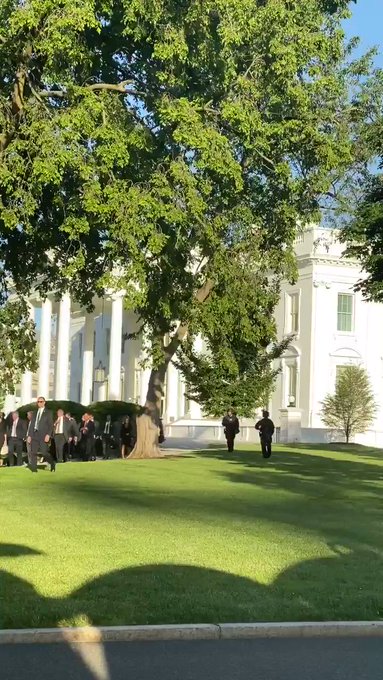 This is an incredibly important moment as the President @realDonaldTrump deliver remarks to the American people and walks to St. John’s Church. An extraordinary church where every President has prayed including Abraham Lincoln during the scourge and tragedy of the Civil War.

<
>
<
>
<
>
<
>
The fact that Trump went to a church while holding his mother’s Bible sent leftists, including the Bishop overseeing St. Johns, into paroxysms of rage:

The bishop of the Episcopal Diocese of Washington condemned President Donald Trump on Monday for his visit to St. John’s Episcopal Church near the White House after law enforcement officers used tear gas to clear protesters from the area.

“Let me be clear: The president just used a Bible, the most sacred text of the Judeo-Christian tradition, and one of the churches of my diocese without permission as a backdrop for a message antithetical to the teachings of Jesus and everything that our churches stand for,” Bishop Mariann Edgar Budde told CNN.

“And to do so… he sanctioned the use of tear gas by police officers in riot gear to clear the church yard. I am outraged,” Budde said.

Who knew that Jesus supported criminals and communists destroying American cities and burning churches to the ground?

Trump’s silence over the weekend was calculated. Aside from federalism holding his hand until the rioting became untenable, he knew that the Democrat leaders in riot-torn cities would be unable to defend their cities. Antifa is the paramilitary arm of the Democrat Party, and the party’s politicians agree with its ends and tolerate its means. With his crackdown, the walls may be falling in on Democrats, and many Americans will be re-thinking their allegiance to a party that was happy to let America burn.