In campaign speech in synagogue, defense minister also says ultra-Orthodox parties will accept any policy as long as they get money; vows not to join Blue and White government. 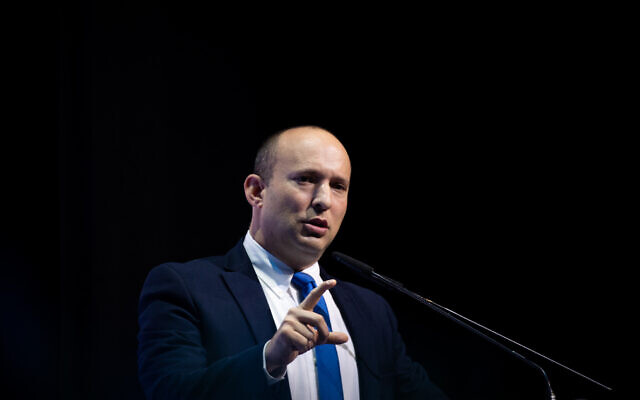 Defense Minister Naftali Bennett described ultra-Orthodox politicians as easily bought off and urged a “cold war” with Iran in a campaign speech Saturday.

Bennett, the leader of the hardline right-wing religious Yamina party, who was appointed defense minister some three months ago, set out his doctrine regarding the threat posed by Iran, saying his aim was to expel Tehran’s forces from Syria within a year and to turn Syria into the Islamic Republic’s “Vietnam.”

He said Iran was responsible for 70 percent of Israel’s security problems, via training and funding terror groups like Hamas and Palestinian Islamic Jihad in Gaza and Hezbollah in Lebanon.

“We are losing our sons in [2014’s Operation] Protective Edge [in Gaza], in the Second Lebanon War, in battles with Iran’s fingertips. And who is immune all the while? The head of the octopus,” Bennett told synagogue-goers in the Tel Aviv suburb of Givat Shmuel.

“We are in a process of switching to hurting the head of the octopus — Iran’s power. I am not necessarily talking about a full-blown war with Iran tomorrow; it is more similar to the Cold War between the Soviet Union and the United States, with the two regional powers Israel and Iran.”

He said that while Israel has thus far only targeted one in five Iranian weapons shipments to Hezbollah, it would from now on target all of them. He said Jerusalem and Washington had agreed that Israel is responsible for countering Iran in Syria, while the US is in charge of acting against it in Iraq.

“That territory called Syria — we have intelligence superiority and aerial superiority there,” Bennett said. “In the infantry it is called a ‘destruction zone.’ It is a bad place for Iran to be. Anything they bring there we will immediately strike.”

All but confirming Israel’s involvement in a strike on Syria last week, he added: “Foreign media reported this week that 23 Syrians and Iranians were killed there. Those are large numbers and we will do more and more so that Syria becomes their Vietnam.”

Bennett added that he would aim to avoid sending Israeli troops into Lebanon or Gaza in potential future wars.

“That is playing on their home turf, and I want to relocate the game to our home turf,” he said, arguing that weakening Iran would invariably weaken its proxies Hezbollah and Hamas.

Regarding the current escalation of tensions with Gaza, Bennett claimed he was leading a change whereby Israel was targeting rocket factories not only in response to rocket launches, but also in reaction to the launches of balloons attached to incendiary devices.

“Every day that balloons are launched at us we are hitting Hamas targets,” Bennett said. “The targets are not [empty] hills. I personally look at aerial photos and approve every target. The targets are machines producing rockets, rocket factories, parts of [cross-border] tunnels. These days we are slowing their rocket production.”

He said he is not interested in more two- or three-day rounds of violence with Hamas. Instead, he was working on plans for a “significant” offensive to be initiated at a time picked by Israel that would fundamentally change the current situation, without elaborating.

If there will be no other choice, he added, he would also launch military operations in the more immediate future, in which “nobody in the Hamas leadership will be immune.”

No coalition with Blue and White

Bennett also spoke to the political situation in the country, saying he had no intention of joining a coalition headed by the centrist Blue and White party after the elections on March 2.

“It’s super easy with the [ultra-Orthodox],” Bennett said when asked about his party’s alliance with Haredi parties Shas and United Torah Judaism.

He indicated that the parties were political chameleons, willing to go along with any political, security or economic policies so long as they continued to receive earmarks for various pet projects benefiting their ultra-Orthodox communities.

Bennett was speaking at the Lechu Neranena synagogue in Givat Shmuel, a mostly modern Orthodox suburb near Tel Aviv, bordering the ultra-Orthodox city of Bnei Brak. He was one of several Yamina politicians to blitz religious Zionist synagogues around the country for stump speeches on Saturday. 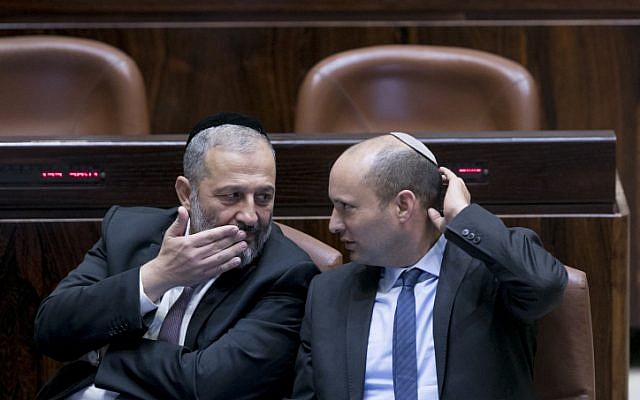 Yamina joined with UTJ and Shas after September elections to form an alliance with Likud aimed at keeping Prime Minister Benjamin Netanyahu in power.

While Bennett’s comments were likely meant in a positive sense, previous characterizations of ultra-Orthodox politicians as primarily concerned with money have been met with accusations of anti-Semitism.

Yamina responded Sunday by alleging that “the remark was distorted and taken completely out of context.”

There was no immediate reaction from Shas or UTJ.

Bennett said national-religious parties were in the past viewed as similarly willing to support the right and not intervene in political, defense or economic policy decisions that didn’t directly relate to their voter base, something he had worked to change.

“Ariel Sharon and Netanyahu as well, both loved us when we were docile. Sitting in the back of the bus and letting them drive, taking us to the Gaza disengagement while we rode along, taking us to the Second Lebanon War failure.”

Despite the criticism, he said his party had no intention of joining up with Blue and White, Likud’s chief rival, which has attempted to lure Yamina, or just Bennett’s New Right faction, away from Netanyahu in coalition talks.

“There is zero chance,” he said, describing Blue and White MKs Yoaz Hendel and Zvi Hauser, both former Netanyahu aides seen as the rightist flank of the party, as mere fig leafs. “The DNA of the party is leftist anti-religious.”

“That government didn’t hold because it wasn’t coherent,” he said. “The chances that one of us will go with [Blue and White leader Benny] Gantz are zero.”