PA leader understands his people have no appetite for another intifada, and so is focusing his efforts on the global arena, hoping for statehood recognition 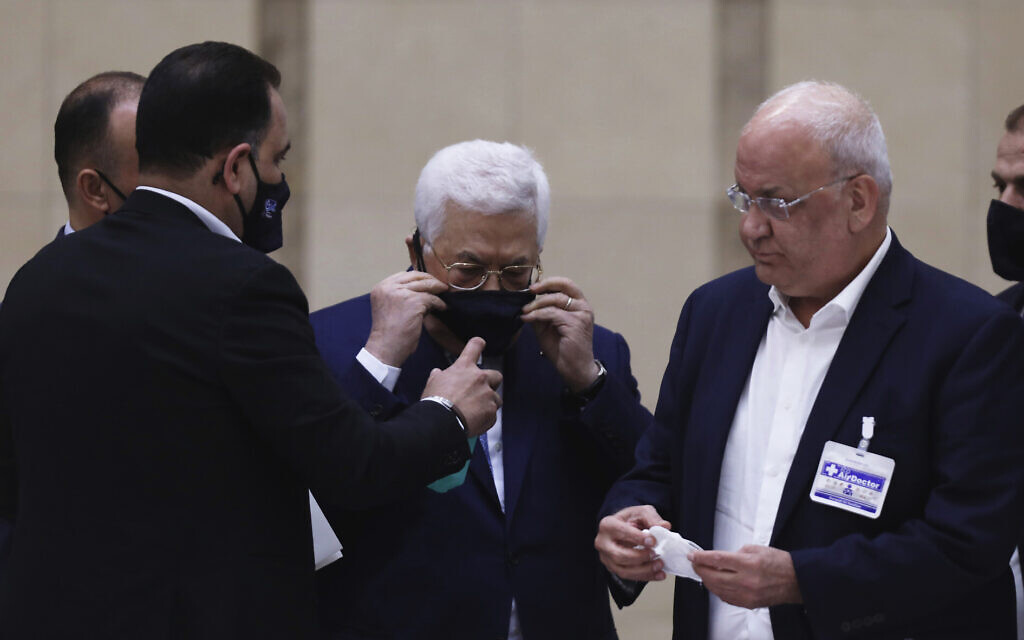 Palestinian Authority President Mahmoud Abbas puts on a face mask as he heads a leadership meeting at his headquarters in the West Bank city of Ramallah on May 19, 2020. (Alaa Badarneh/Pool Photo via AP)

Though Israel’s planned annexation of parts of the West Bank hasn’t happened yet, on the ground its tremors are already being felt.

The first victim of the fracas around annexation is the security coordination between Israel and the Palestinian Authority, halted last month. Though there are still some phone conversations between the parties, these are occurring less and less frequently.

The good news on this front is that the PA continues to work to thwart terror attacks, and isn’t attempting to block activities such as Jewish prayers at Joseph’s Tomb near Nablus.

The decision to cut ties with Israel is also affecting the day-to-day lives of Palestinians, who no longer have their authorities’ help in securing permits to enter Israel. Workers, students, businessmen, medical patients, and others who wish to cross over, must now apply directly to Israel’s Coordinator of Government Activities in the Territories (COGAT).

While seemingly a bureaucratic detail, the change has dramatic and symbolic implications: Palestinian residents of the West Bank are now going back to conducting some aspects of their lives in direct contact with Israel’s military authorities, rather than the PA. Palestinians protest against Israel’s plan to annex parts of the West Bank in the West Bank city of Hebron, June 5, 2020. (Wisam Hashlamoun/Flash90)

This is bad news for Hussein al-Sheikh, head of the General Authority of Civil Affairs of the Palestinian Authority, which to date had handled such affairs. Al-Sheikh’s office used to get a commission on each permit handled. Now, his revenues have evaporated. The office also provided one of the best ways for PA leadership to settle scores with rivals in Hamas or Fatah — delaying or rejecting permits as a pressure tactic.

Such moves may end up exacerbating the plight of PA President Mahmoud Abbas who, while championing an aggressive anti-annexation policy, has so far been largely met with indifference by the Palestinian public.

“The Palestinian leadership is in strategic crisis,” says Dr. Michael Milstein, head of the Palestinian Studies Forum at the Moshe Dayan Center for Middle Eastern and African Studies.

“Abbas has initiated processes that were supposed to jump start something. But the public has not pitched in, and the international community is not there yet either. The threat of dissolving the Palestinian Authority is a gun with an empty chamber.”

As the PA stokes alarm over Israel’s plans, there is little evidence at this point that their public has an appetite for confrontation.

“You see the numbers,” Milstein says. “Last Friday only 5,000 people attended an anti-annexation protest in Az-Zubaidat in the Jordan Valley. When Abbas looks at the public, he realizes he has failed.

“These days, the public is more interested in the fact that about 200,000 PA officials haven’t received their salaries yet, due to the PA’s decision to reject the tax revenues that Israel has collected.”

He adds that while the PA’s actions are “meant to deter Israel and foment the public against it… it might turn out to be a double-edged sword and inspire rage against the PA.” Palestinians participate in a march rejecting Israeli annexation in the West Bank and the Jordan Valley in Rafah in the southern Gaza Strip, June 11, 2020. (Abed Rahim Khatib/Flash90)

For Israel, though, there are other causes for concern beyond the Palestinian public’s general attitude.

Though the streets remain relatively calm, Fatah’s militant offshoot the Tanzim, the slumbering beast that fueled the Second Intifada in its early days, is starting to wake up and exhibiting a growing presence in the West Bank. Tanzim members have increasingly been seen operating in Qalqilya and Hebron, and they are very present in the area surrounding Jerusalem, with East Jerusalem residents reporting hearing increased gunfire in the area’s villages and refugee camps.

It was not actually annexation that awakened the beast, but rather the pandemic: Fatah leaders who sent the field operators into villages, often armed, in order to enforce COVID-19 discipline, are now finding it difficult to remove them again. In isolated locations such strongmen can claim more and more autonomy, engage in criminal activities and become a nuisance for both residents and Israeli security forces.

Understanding that the public is not seeking another intifada, and that it will find it hard to manufacture a true crisis, the PA is now aiming for more symbolic achievements.

In the event of annexation, it could lodge a fresh appeal to the UN Security Council, in an attempt to gain international recognition of a Palestinian state under occupation. The US is expected to veto any initiative of the sort. But that won’t stop the initiatives, a Palestinian official says.

“The current plan is to keep appealing to UN institutions in order to be recognized, even if the proposals are vetoed over and over. Many countries support this move, so the leadership supports it as well.”

He adds: “There are already 12 or 13 European states that are willing to recognize a Palestinian state under occupation in the event of an Israeli annexation, and that’s the price Israel will have to pay.”

According to the official, no one seeks an actual escalation, an intifada or chaos.

“The PA wants perhaps demonstrations like the ones that occurred during the metal detectors crisis at the Temple Mount, but nothing that will get out of hand. On the other hand, it will not be able to accept an annexation that will take no toll on Israel,” he says.

The official mentions the empathy that countries around the world have expressed for the Palestinian cause.

“Arab countries already rail against annexation. It is controversial even in the White House, so the PA has no intention of stopping its anti-annexation activity — quite the opposite.”