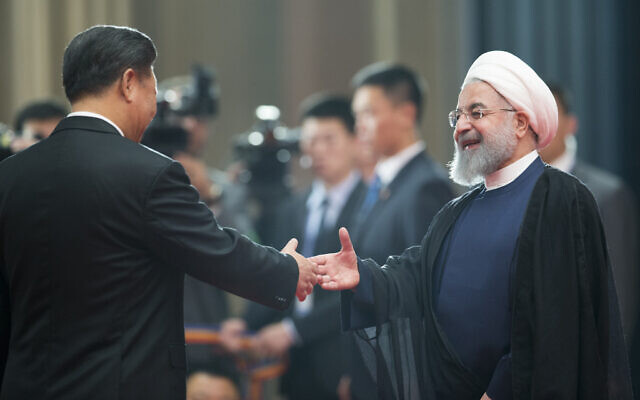 Negotiations between Iran and China over the creation of a 25-year strategic accord appear to have concluded, with The New York Times on Sunday publishing excerpts from an 18-page agreement labeled “final version” that could see Beijing invest $400 billion over the next 25 years in exchange for discount oil.

The document — which The Times said was dated June 2020 and has yet to be approved by the Majles, Iran’s parliament — detailed how Beijing would receive Iranian oil at a sharply reduced price for the next quarter century in exchange expanding its economic involvement in a variety of fields, including banking and infrastructure, such as telecommunications and transport.

This would potentially include giving the Iranians access to China’s global positioning system and helping roll out an Iranian 5G network. 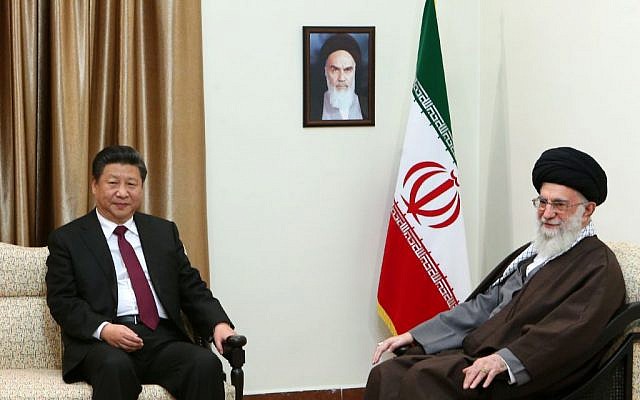 Tehran has been hit hard by American sanctions reimposed following Washington’s withdrawal from the 2015 nuclear deal in May 2018. Iranian crude exports have been severely curtailed by the US sanctions, as has much of the country’s foreign trade.

The deal could bring Iran as much as $400 billion in Chinese investment over the next quarter century, according to sources with knowledge of the deal who spoke with The Times.

The deal would also encompass military cooperation, including weapons development, combined training and intelligence sharing in order to combat ““the lopsided battle with terrorism, drug and human trafficking and cross-border crimes,” The Times reported.

Both Tehran and Beijing are currently at loggerheads with Washington, Iran over its nuclear program and China over ongoing trade disputes with the Trump administration.

The US has accused China of stealing its intellectual property and engaging in forced technology transfers from US firms doing business there.

The accord said that Iran and China as “two ancient Asian cultures, two partners in the sectors of trade, economy, politics, culture and security with a similar outlook and many mutual bilateral and multilateral interests will consider one another strategic partners,” the paper reported. 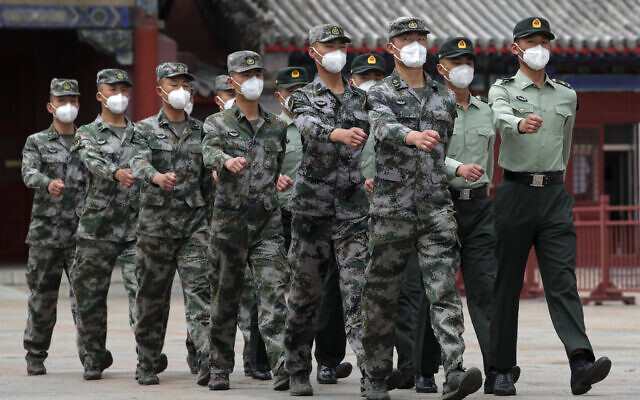 Chinese People’s Liberation Army (PLA) soldiers wearing face masks to protect against the spread of the new coronavirus march near the Forbidden City during a plenary session of China’s National People’s Congress (NPC) at the Great Hall of the People in Beijing, May 25, 2020. (AP Photo/Andy Wong)

On Sunday, a senior aide to Iranian President Hassan Rouhani said that the accord could be signed as early as next March, Radio Farda reported.

There has been some pushback in Iran regarding the deal.

Last Monday, Iranian Foreign Minister Mohammad Javad Zarif told lawmakers that their country had been negotiating with the Chinese and that the terms would be announced once a deal is struck.

During the session, Zarif was heckled by lawmakers, largely over his key role in negotiating a 2015 nuclear deal with world powers, which the US unilaterally abandoned in 2018 as a prelude to reimposing biting sanctions.

It was his first address to parliament since a new house started work in late May in the wake of elections that were dominated by conservatives and ultra-conservatives.

Zarif insisted there was “nothing secret” about the prospective China deal.

The nation would be informed “when an accord has been concluded,” he said, adding that the intention had already been made public in January 2016 when Chinese President Xi Jinping visited Tehran.

Iran’s Supreme Leader Ayatollah Ali Khamenei has come out publicly in support of a strategic bilateral partnership with China.