Children’s playground in Sderot damaged by rocket debris. IDF says aircraft struck “dozens of Islamic Jihad terror targets throughout the Gaza Strip” and a facility belonging to the terrorist group on the outskirts of Damascus. Palestinian Islamic Jihad says the airstrikes in Damascus killed two of its members. 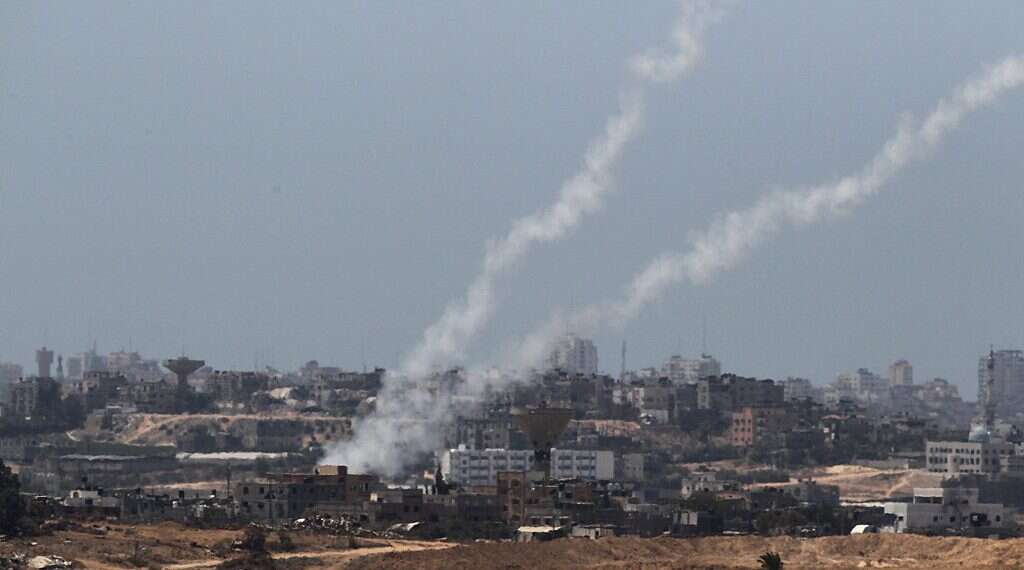 For the second day in a row, sirens blared across southern Israel on Monday as residents were forced to take shelter in the face of incoming rockets fired from Gaza.

There were no reports of casualties, but considerable damage was caused to property in several locations by debris from intercepted rockets.

The IDF said it identified 14 rocket launches from the Gaza Strip toward Israel. Twelve were intercepted the army said.

Prime Minister Benjamin Netanyahu spoke on the phone with the mayors of Ashkelon and Sderot, where a children’s playground was damaged, and is currently holding a security consultation via telephone with the heads of Israel’s security agencies.

The IDF said earlier Monday that it struck targets belonging to the Palestinian Islamic Jihad terrorist group in Gaza and Syria after over 20 rockets were fired at southern Israel on Sunday evening, hours after a Palestinian terrorist who tried to place a bomb along the Israel-Gaza barrier fence was shot and killed by IDF troops.

The IDF reported air raid sirens throughout southern Israel and said at least 20 rockets had been fired. There were no reports of damage or injuries on the Israeli side, but it was the heaviest barrage of rockets from the Gaza Strip in several months. Air raid sirens continued into the evening, and the IDF’s Home Front Command ordered the suspension of classes in Israeli schools in southern Israeli communities near the Gaza Strip on Monday and prohibited large gatherings.

In response to the rocket fire, the army said aircraft struck “dozens of Islamic Jihad terror targets throughout the Gaza Strip” and a facility belonging to the terrorist group on the outskirts of Damascus, the Syrian capital.

The Gaza health ministry reported that four Palestinians were treated at the Al-Shifa hospital in Gaza City for wounds caused by the Israeli strikes.

Palestinian Islamic Jihad said in a statement that the airstrikes in Damascus killed two of its members, identifying them as Salim Salim, 24, and Ziad Mansour, 23. It did not disclose their nationalities or elaborate on their roles. It vowed to respond to the deaths of its members.

Since then, Israel and Gaza’s more powerful Hamas terrorist group have been working through Egyptian mediators to cement an informal cease-fire. But PIJ has continued to try to carry out attacks.

Islamic Jihad said the man killed along the Gaza border was a member of its organization. Israel said the man was planting explosives along the border fence. Amateur video on Palestinian social media showed an Israeli bulldozer crossing into Gaza and then lifting up his body.

Fawzi Barhoum, a Hamas spokesman, accused the IDF of desecrating the dead body, saying that it “bears the consequences of the ugly crime.”

The IDF said it had removed the body in a way that prevented further danger to those around.

But the images generated widespread anger in Gaza, where it was seen as a provocation and violation of Islamic principles that call for respect for the dead.

It also sparked criticism of Hamas on social media, with people accusing the group of appearing weak and allowing Israel to operate with impunity inside Gaza’s territory. One image on social media showed a picture of Jesus draped with a Palestinian flag hanging off the front of a bulldozer.

Defense Minister Naftali Bennett rejected the criticism, noting that Hamas has been holding the bodies of two Israeli soldiers since they were killed in the summer of 2014 during Operation Protective Edge.

“I back the military, which killed the terrorist and collected the body,” he said. “That’s what should be done and that is what was done.”

The incident comes amid a relative lull along the border fence separating Israel from Gaza. Last week, Israel announced it would provide thousands of additional work permits for Palestinians in the Gaza Strip, in a new step aimed at solidifying an informal cease-fire with Hamas.

Gadi Golan and Daniel Siryoti contributed to this report.