TV reports that officials left in ‘fog’ as Netanyahu yet to reveal scope of move, with military plans being drawn up for everything from calm to onslaught of suicide bombings 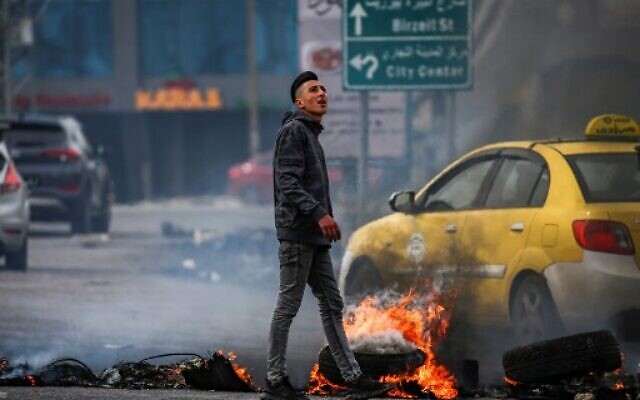 A Palestinian protester walks by burning tires amid clashes with Israeli forces at the northern entrance of the West Bank city of Ramallah on February 14, 2020. (ABBAS MOMANI/AFP)

Just over two weeks before a possible Israeli annexation of some as-yet unspecified portion of the West Bank, the Israel Defense Forces is preparing for a wide range of scenarios for potential regional fallout — up to and including a large-scale wave of terror attacks — while still not being told exactly what the government has in mind.

The military is gearing up for possible massive unrest, Channel 12 reported Sunday evening, including what it is calling a potential “state of war” characterized by a Second Intifada-style onslaught of suicide bombing attacks.

The coalition agreement between Likud and Blue and White stipulates that Prime Minister Benjamin Netanyahu can advance an annexation proposal in the cabinet or Knesset beginning July 1. Netanyahu has promised to do so at that date, though he has faced growing pressure from all sides, including leaders of West Bank settlements, to delay the move.

Channel 12 said Sunday that top army officers charged with the preparations are “working in a fog,” as they have not received details about the proposed scope of the planned annexation. 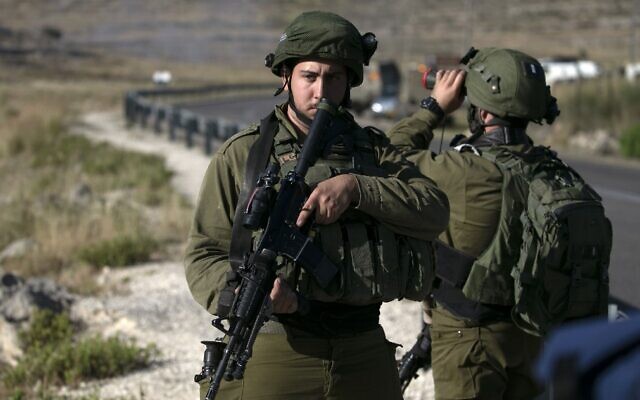 Israeli soldiers stand guard near the scene of an apparent attempted car-ramming attack by the West Bank settlement of Halamish on May 29, 2020. (Abbas Momani/AFP)

It is not clear that Netanyahu has decided on the scale of the annexation. Officials from the Prime Minister’s Office have suggested different scenarios in recent weeks, including an annexation that includes the Jordan Valley, which makes up almost 30 percent of the West Bank, and one limited to lands administered by Israeli settlements, or roughly 3% of the area.

Foreign Minister Gabi Ashkenazi told reporters last week that the joint US-Israeli mapping team was still piecing together a “technical map” and drawing precise lines, and that map would guide the decision making.

According to Channel 12, that lack of clarity has led the IDF to prepare for a broad set of Israeli moves and likely responses both in the West Bank and regionally.

The report listed three scenarios that have drawn the most attention from the army.

The first would see mass protests by Palestinians; the second, shooting attacks in the West Bank; the third, a return to the waves of suicide bombings seen during the Second Intifada in 2000-2004. This third level, Channel 12 specified, is being designated “war” in the IDF’s preparation, and refers to bus and restaurant bombings and other such major terrorism. The IDF’s assessment, however, is that any Palestinian violence “won’t get there” — to the “war” level — in part because 200,000 Palestinians depend on income from Israel and do not want to have the West Bank economy destroyed. 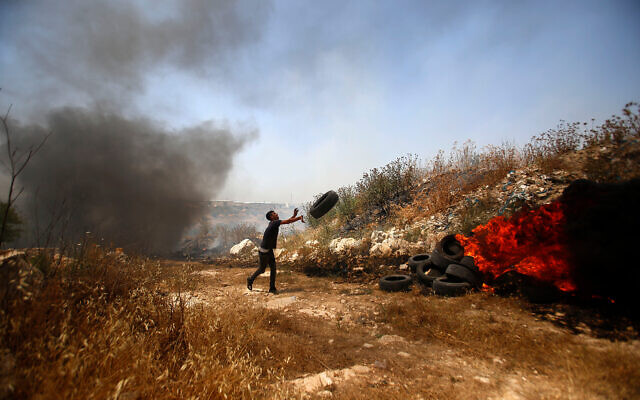 A Palestinian man throws a tire during clashes with Israeli soldiers in the West Bank village of Qusin near Nablus, June 5, 2020. (AP/Majdi Mohammed)

The report also said the army had drawn up alternate plans in case the annexation passes relatively quietly.

Some have argued the Palestinian response will be subdued. Some 200,000 Palestinians earn a living either in Israel or from commercial ties with Israelis, and economic conditions in the West Bank are relatively good. The IDF believes that a massive spike in violence would primarily hurt the Palestinian economy.

While the coalition agreement lets Netanyahu move ahead with annexation without his Blue and White coalition partners, the Trump administration has reportedly asked the prime minister to obtain the support of his centrist partners in order to ensure Washington’s backing.

Channel 13 reported that a meeting Sunday between Netanyahu, Defense Minister Benny Gantz, Foreign Minister Gabi Ashkenazi, Knesset Speaker Yariv Levin and US Ambassador David Friedman ended without an agreement on how to move ahead with annexation.

According to the report, Netanyahu and Levin, from the Likud party, presented several ideas to centrists Gantz and Ashkenazi covering various options for annexation, including with or without the Jordan Valley, settlement blocs only, and other configurations. 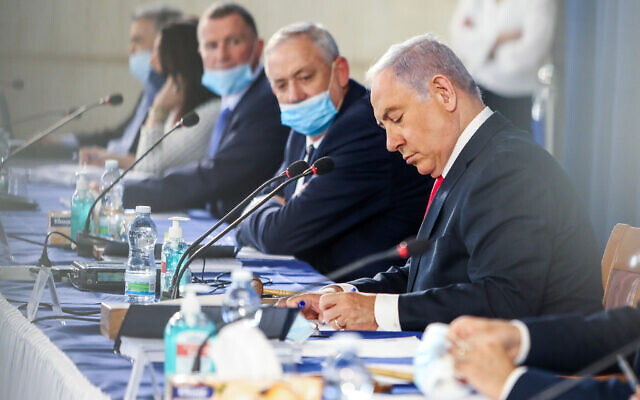 But, the report said, citing an unnamed senior official, the prime minister presented no detailed maps.

The channel said while Netanyahu is pushing for annexing the most land possible, Gantz and Ashkenazi have “no appetite for dramatic moves,” especially if the US starts to cool on the prospect.

The sides are set to meet again on Monday.