A new public campaign aimed at “debunking the occupation lie” is launching this month in Israel and in Canada in the wake of the newly released “Deal of the Century.”

A new public campaign aimed at “debunking the occupation lie” is launching this month in Israel and in Canada in the wake of the newly released “Deal of the Century.”

The campaign is being implemented by Canadians for Israel’s Legal Rights (CILR) in partnership with Israel’s largest grassroots Zionist movement, Im Tirtzu, and seeks to dispel what the organizations have dubbed the “Big Occupation Lie.”

According to CILR and Im Tirtzu, the utterly baseless notion that Israel occupies “Palestinian land” is one of the most pernicious lies used to discredit, demonize, and delegitimize the Jewish state and the Jewish people.

“The ‘Big Occupation Lie’ has become the driving source of BDS and modern-day anti-Semitism,” the organizations explained, “and with all the discourse surrounding the ‘Deal of the Century,’ it is critical to explain the simple truth that Jews are indigenous to the Land of Israel.”

“It is important for people to understand that historically there was no such thing as a Palestinian people,” the groups added.

The campaign coincides with the 100th Anniversary of the seminal San Remo Conference, convened by the Allies of World War I in April 1920, which entrenched Israel’s legal rights in International Law.

The groups have vowed to go on the offensive by creating and promoting a wide range of content debunking the “Big Occupation Lie,” including viral videos on social media; educational lectures in Israel and Canada; the distribution of advocacy materials throughout Israel and Canada; and large billboards in Israel’s major cities.

The groups will also host a high-profile conference in Israel in April 2020, which will commemorate the 100th anniversary of the San Remo Resolution. According to the groups, prominent Israeli personalities will be in attendance.

Co-Chairs of CILR, Goldi Steiner and Irving Weisdorf, stated that the campaign “will leave no stone unturned” in its effort to debunk the occupation lie and the growth of anti-Semitism worldwide.

“Anti-Semitism is fueled by the lies of a vast multi-decade propaganda campaign that casts Palestinian Arabs as victims, when in fact it was they who tried to wipe Israel off the map a mere three years after the Holocaust and several times since,” Steiner and Weisdorf said.

“The release of the  ‘Deal of the Century’ has made it even more crucial to educate the nations of the world about Israel’s biblical, legal and indigenous rights,” they continued, “and we are therefore committed to continuing this campaign for years to come.”

“This is a global task beyond any one organization’s capacity; therefore, it is imperative to engage more NGOs and individuals – Jews and non-Jews alike – to join this effort. Community leaders, community influencers, and each and every one of us have a great role to play.”

Matan Peleg, CEO of Im Tirtzu, said: “The lie that Israel occupies Judea and Samaria is a modern day blood libel against the Jewish People.”

“This libel not only causes irreparable damage to the Jewish state, but also to the Jewish people worldwide who have become targets of growing anti-Semitism masked by anti-Zionism.”

Peleg added: “The indisputable facts remain that Israel – and only Israel – has the legal, historic and moral claim to the land.”

This article was written in cooperation with Canadians for Israel’s Legal Rights and Im Tirtzu.
***
This is a very worthy cause. Go here to read all about and donate to the effort.

Both Irv Weisdorf and Goldi Stiener are very good friends of mine and they both live in Toronto.

Solomon Benzimra z”l, who was the author of The Jewish People’s Rights to The Land of Israel was also our friend. 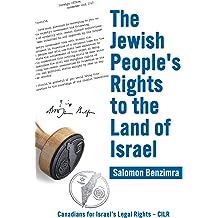