T. Belman. What a comedown. Just three settlements and no mention of E-1 associated with Maaleh Adumin. It would appear that such a move is not seen as endorsing the Trump Plan.  And why not apply Israel law to all the settlements without reference to the Trump Plan? Why is everyone so timid now? Why do we care what Jordan has to say?  Jordan will never cancel the Peace Treaty with Israel. In fact the US has told the King in no uncertain terms not to terminate the agreement or else.

Why is Jordan brought to the table? They reliquished all their claims to this land. What is going on here?

Why is TOI using the word annexation to describe what is to take place?

By SHALOM YERUSHALMI, TOI Today, 8:47 am 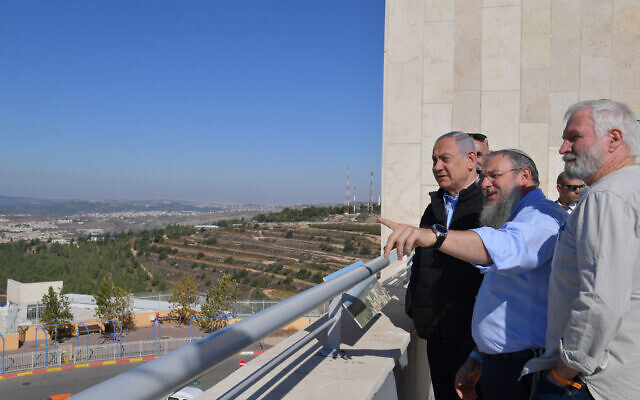 Netanyahu had vowed to stick to a July 1 date for declaring annexation over all of Israel’s West Bank settlements and the Jordan Valley, but has recently seemed to temper expectations and indicate that only some areas would be annexed starting on that date. US and Israeli officials have indicated that much legwork remains to be done in preparing for annexation, including by the military and the joint mapping committee tasked with delineating the contours of the annexation move.

According to the Israeli officials, Netanyahu will delay most annexation and only focus on the blocs of Ma’ale Adumim, Ariel and Gush Etzion, home to large settler populations.

Israelis believe there is relative consensus, domestically and in Washington, around Jerusalem holding onto the three areas, even in the case of a peace deal with the Palestinians based on the 1967 lines and land swaps.

The areas are seen as relatively well-defined areas that would not require much mapping work. The Etzion  and Ma’ale Adumim blocs are directly to the south and east of Jerusalem, respectively. Ariel is a large settlement deep in the northern West Bank, but is linked to suburbs northeast of Tel Aviv via a string of smaller settlements and access roads.

The officials spoke to Zman Yisrael, the Hebrew sister site of The Times of Israel, in a story published Wednesday.<
>
<
>
Officials believe initially focusing on the blocs would avoid some friction with Jordan, which the US is said to be concerned about.

Palestinian sources reportedly said this week that Jordan does not want to take concrete steps unless or until annexation is officially declared. But they said the kingdom has told the Palestinians that King Abdullah II “will not go silently through the annexation process.” Among the possible steps it might take are canceling its peace treaty with Israel.

According to the Israeli officials, the plan for limited annexation would also be accepted by Netanyahu’s coalition partner Blue and White, as well as the settler leaders who have expressed strident opposition to US President Donald Trump’s plan, which envisions a Palestinian political entity on the 70 percent of the West Bank not to be annexed by Israel.

The officials said that Netanyahu will sell the annexation of the three areas as merely a first step and a move that can be made unilaterally given the political circumstances. 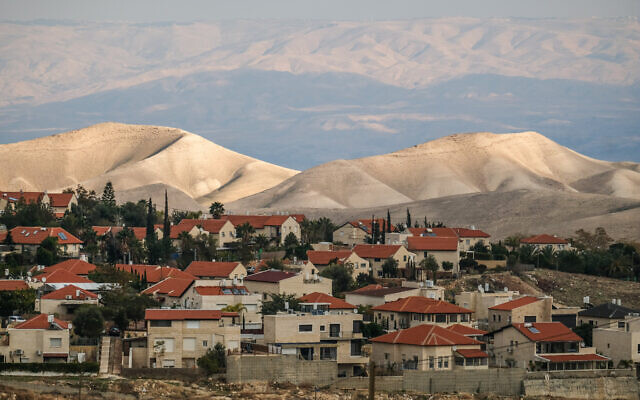 View of the settlement of Ma’ale Adumin, in the West Bank overlooking the E1 area, January 4, 2017. (Yaniv Nadav/Flash90)<
>
<
>
On Tuesday, Defense Minister Benny Gantz warned settler leaders against overplaying their hand with the Trump administration, urging them to be content with whatever amount of land the US is willing to accept Israel annexing, according to two West Bank mayors who heard the comments.

It was unclear if Gantz was implying that he agreed with Netanyahu’s annexation plans.

The coalition deal signed between Prime Minister Benjamin Netanyahu’s Likud party and Gantz’s Blue and White allows the prime minister to begin moving forward with annexation on July 1. The parts of the West Bank that Israel would extend sovereignty over are those earmarked for it under Trump’s peace plan.

The US initially said it would recognize annexation immediately, but subsequently appears to have at the very least tempered its enthusiasm for the controversial move before a joint mapping committee can carry out its work.

The US administration is highly unlikely to approve an Israeli move to unilaterally annex parts of the West Bank by the July 1 date envisioned by Netanyahu, a well-placed source told The Times of Israel last week.  (This is not true)

In fact, it could take weeks and possibly months before a committee charged with mapping the territory concludes its work, which the White House has declared as a precondition that must be met before it would give a green light for annexation, the source said.

Israel’s annexation plan has drawn a flurry of regional and international condemnations.

German Foreign Minister Heiko Maas is due to land in Israel on Wednesday morning for a meeting with his counterpart Gabi Ashkenazi expected to focus on annexation.

Berlin is staunchly opposed to annexation and has made its view clear. However, it will not respond harshly to Israel’s planned unilateral annexation of parts of the West Bank, a diplomatic official in Jerusalem said Monday.

While annexation would likely cause a certain degree of damage to bilateral ties, Berlin has made plain that it does not plan to enact sanctions against the Jewish state or recognize a Palestinian state, the official said.