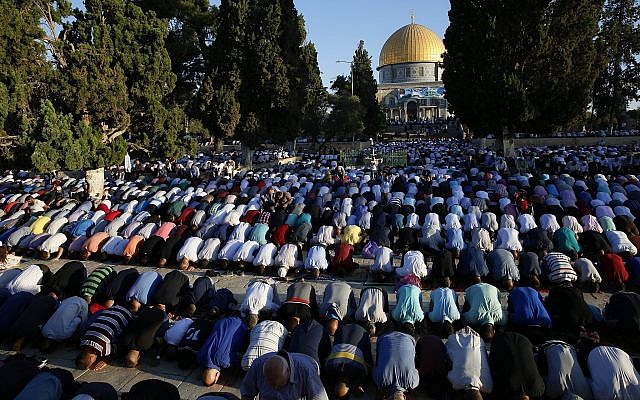 The Ramallah-based Palestinian leadership has lambasted the US State Department’s annual human rights report for referring to Palestinians living in East Jerusalem as “Arab residents,” saying it was “falsifying history.”

In its human rights report issued on Wednesday, the State Department referred to Palestinians residing in the parts of Jerusalem on the West Bank side of the security barrier as “Palestinians.” When alluding to all Palestinians in the city, it called them “Arab residents.”

“Any attempt at falsifying history or truth will not give legitimacy to anyone and will not change the history of the Palestinian people in Jerusalem,” Nabil Abu Rudeineh, Palestinian Authority President Mahmoud Abbas’s spokesman, said on Wednesday in a statement carried by the official PA news site Wafa. 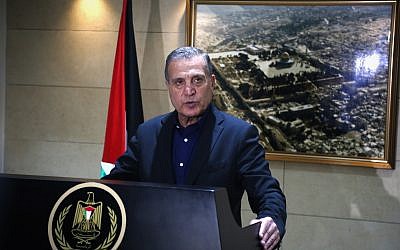 In the human rights reports it issued in 2017, 2018 and 2019, the State Department referred to “Palestinian residents of Jerusalem” on multiple occasions.

Abu Rudeineh also slammed the State Department report as “another abortive attempt by the American administration to implement the so-called dead deal of the century, which is rejected by Palestinians, Arabs and the international community.”

The recently revealed US plan to resolve the Israeli-Palestinian conflict, sometimes referred to as “the deal of the century,” calls for the creation of a Palestinian capital in the neighborhoods in Jerusalem on the West Bank side of the security barrier and other adjacent areas, while making the rest of the city Israel’s capital.

Abbas has adamantly rejected the US plan, calling it “the slap of the century” and vowing the Palestinian people “will send it to the dustbins of history,” whereas Prime Minister Benjamin Netanyahu has said he supports the plan.

Saeb Erekat, the secretary-general of the Palestine Liberation Organization’s Executive Committee, also blasted the US report, charging that it adopted Israel’s narrative regarding Jerusalem.

“We, Palestinians, Arabs, Christians, Muslims, are the sons and daughters of Jerusalem, our capital and home,” Erekat wrote on Twitter on Wednesday. “Changing the [designation] from Palestinian residents to Arab residents is a desperate attempt at erasing [references] to the Palestinian people from Jerusalem.”

PA Foreign Minister Riyad al-Malki also lashed out, claiming that the report was put together by Israel.

“It was formulated by the Israeli occupation forces and adopts and expresses bias in favor of the occupation and the extremist right-wing government’s narrative,” he said in a statement posted on the Foreign Ministry’s Facebook page.

The US Embassy in Jerusalem and the Israeli Foreign Ministry did not immediately respond to requests for comment about the report.

Since late 2017, the Trump administration has made several moves seen as marginalizing the Palestinians: recognizing Jerusalem as Israel’s capital, moving the US embassy in the Jewish state from Tel Aviv to Jerusalem, cutting hundreds of millions of dollars in aid to the Palestinians and the UN agency that supports Palestinian refugees, closing the PLO representative office in Washington and presenting its plan to resolve the conflict, which heavily favors Israel’s positions. 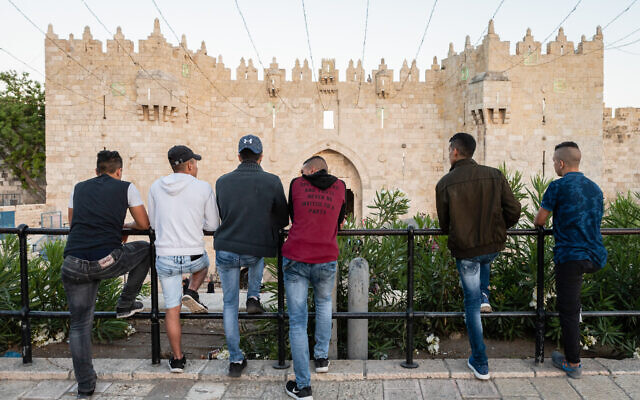 Illustrative: Palestinians standing outside Damascus Gate in the Old City, East Jerusalem on May 14, 2018. (Dario Sanchez/Flash90)

The human rights report, however, did express criticism of the Jerusalem Municipality for not providing adequate services to Palestinians living in the eastern half of the city.

“The Jerusalem municipality failed to provide sufficient social services, education, infrastructure, and emergency planning for neighborhoods where the majority of residents were not Israelis, especially in the areas between the security barrier and the municipal boundary,” it said.

Even though Palestinians in East Jerusalem make up 38% of the city’s more than 900,000 residents, the Jerusalem Municipality only invests 10-12% of its budget in their neighborhoods, according to Daniel Seidemann, an expert on Jerusalem affairs.