Netanyahu denies he okayed the sale as part of normalization with Abu Dhabi, but it is the US which must decide if it undercuts the Israeli military edge it vowed to uphold 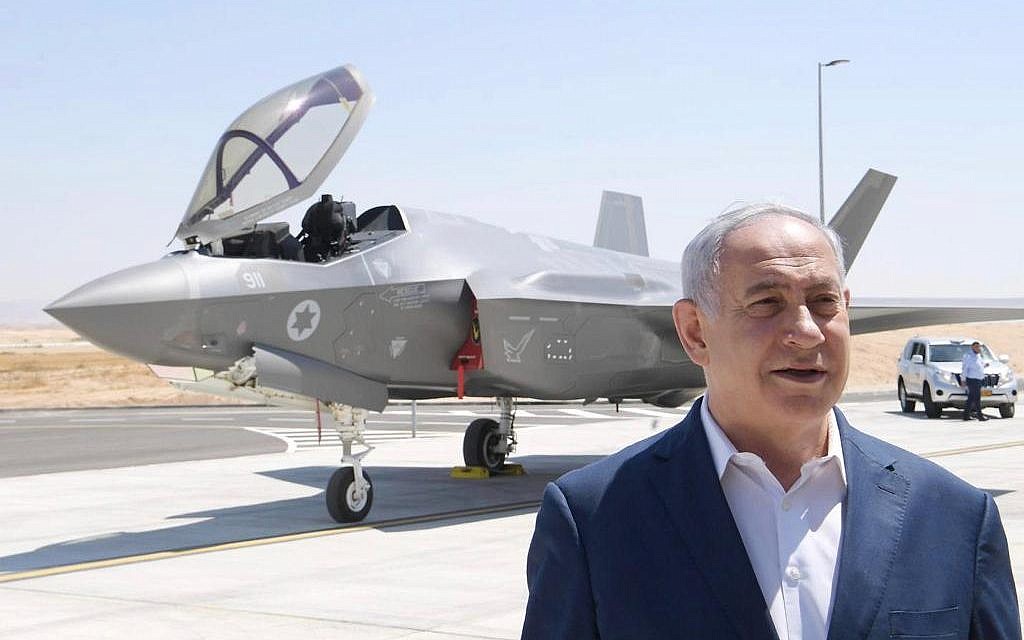 The already crowded and dangerous skies above the Middle East appear poised to host even more advanced aircraft after the United States reportedly agreed to sell F-35 fighter jets and unmanned aerial vehicles to the United Arab Emirates, a move that Washington had apparently shied from due to concerns about maintaining Israel’s “qualitative military edge” in the region.

The Yedioth Ahronoth newspaper, which first reported on the deal Tuesday, said the sale of the F-35 and advanced drones, and Israel’s dropping of any objections to it, was a condition of the emerging normalization agreement between Jerusalem and Abu Dhabi that was brokered by Washington.

The report came as a shock in Israel, including to Defense Minister Benny Gantz, who’d been kept in the dark about the entire normalization deal.

Haim Tomer, a former director of the Mossad’s intelligence unit, told the Kan broadcaster on Tuesday morning that he was less troubled by the sale of the F-35s than by the reported fact that the decision was made without the knowledge of Gantz and the defense establishment, representing a deep breakdown in the normal inter-agency process. 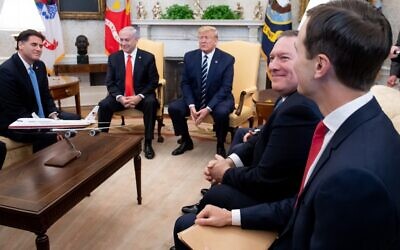 Former US ambassador to Israel Dan Shapiro criticized the manner in hich the sale, and Israel’s reported agreement to drop any objections, appears to have been negotiated — by a small group of highly senior officials without the input of the relevant government offices.

“This is not really a smart way to reach these decisions,” Shapiro told The Times of Israel.

The report of a possible deal between the US and the UAE for the fifth-generation fighter jets, and Israel’s role in giving or withholding its stamp of approval, has highlighted the seemingly straightforward but actually complex concept of the US’s commitment to maintaining Israel’s advantage over other militaries in the Middle East.

Prime Minister Benjamin Netanyahu quickly denied that an F-35 sale was part of the agreement with the UAE, calling the report “fake news” and noting that he had formally opposed the sale of the aircraft in talks with US Ambassador to Israel David Friedman in July. He also said that Israeli Ambassador to the US Ron Dermer did the same with US Secretary of State Mike Pompeo earlier this month. (He did not, however, address why he and Dermer felt the need to inform the US officials of this opposition unless they knew an F-35 deal was on the table.)

A White House official also denied that there was a secret clause in the normalization agreement regarding weapons sales. 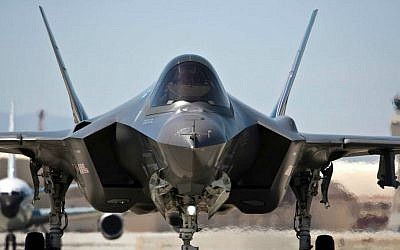 Conspicuously, in none of these refutations did Israeli or American officials deny the F-35s would be sold to the UAE, only that a sale was not formally part of the normalization agreement, leaving open the likely possibility that the US and UAE had struck a separate deal on the matter.

However, a senior Emirati official told the Ynet news site on Tuesday night that allowing the sale to go through was part of the normalization process, if not enshrined in the yet-to-be-drafted agreement, and that Netanyahu was personally aware of it.

Shapiro, who has also served on the US National Security Council, said the UAE had been “seeking the F-35 for years” but had been rebuffed by the US principally because of the potential impact on Israel’s security. 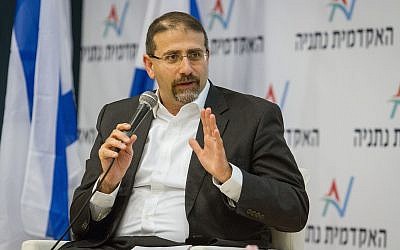 Former US ambassador to Israel Dan Shapiro participates in the Meir Dagan Conference for Strategy and Defense, at the Netanya College, on March 21, 2018. (Meir Vaaknin/Flash90)

“It was the primary — maybe not the only — but the primary consideration for that position,” said Shapiro, now a senior fellow at the Institute for National Security Studies think tank.

Netanyahu may have agreed to remove Israeli objections to a sale as part of the normalization deal, but the buck does not necessarily stop with him, and it’s not clear how any agreement would affect the US’s formal statutory mechanism standing behind the concept of a “qualitative military edge,” often referred to by its abbreviation, QME.

What does qualitative military edge mean?

In 2008, Congress inscribed in law what had been, since the 1970s, an unofficial but universally recognized guiding principle: the United States cannot sell weapons to a country in the Middle East if doing so would “adversely affect” Israel’s military advantage over other countries in the region.

According to the law — House Resolution 7177 — “the term ‘qualitative military edge’ means the ability to counter and defeat any credible conventional military threat from any individual state or possible coalition of states or from non-state actors, while sustaining minimal damages and casualties, through the use of superior military means, possessed in sufficient quantity, including weapons, command, control, communication, intelligence, surveillance, and reconnaissance capabilities that in their technical characteristics are superior in capability to those of such other individual or possible coalition of states or non-state actors.” 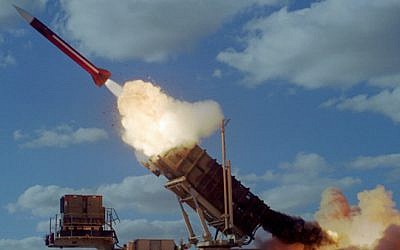 The US president is required to carry out an ongoing “empirical and qualitative assessment” into the possible effects of an advanced weapons sale to a Middle Eastern country and then use that assessment to decide whether to proceed with the transaction. The president must also report on the matter to the US Congress, which can review the evaluation.

The requirement to preserve Israel’s QME does not mean the US is barred from selling advanced weaponry to countries in the Middle East. Rather, it means that the US must ensure that even with any new systems it sells to those countries, Israel’s military remains better equipped. Vide: the US sold F-15s to Saudi Arabia and F-16s to Egypt over the past decade. In 2007, technically before the QME was codified in law but was still a well-understood, bipartisan concept, the US sold 80 F-16 fighter jets to the UAE, without serious Israeli objection.

Israel has had a fleet of F-35 fighters for several years, and the Israeli Air Force considers the jets a game-changer.

According to Shapiro, the US considers in making its evaluation not only the raw power of the weapons but also questions about the stability of the country in question and the likelihood that the systems will be used against Israel, as well as the larger regional impact.

For Israel, which has never had a war with the United Arab Emirates, the expected threat of the F-35 being used against it is low, while the possibility of Abu Dhabi using the aircraft in some kind of operation against Israel’s shared enemy Iran is comparatively far greater. This sentiment has been expressed by a number of former and current Israeli officials, including Energy Minister Yuval Steinitz, who is seen as close to Netanyahu.

“Ultimately, an F-35 in the United Arab Emirates — not that we’d be happy with it, as we always want to be the only ones in the region [with such weapons] — threatens Iran far more than it does us,” Steinitz told the Kan broadcaster.

Steinitz added that the F-35 has a relatively limited range — adding extra fuel would detract from its stealth capabilities — which from the UAE would include portions of Iran, but not Israel.

But agreeing to sell the F-35 to the UAE would make it difficult to refuse to sell it to Saudi Arabia or Egypt, both of which have expressed interest in the aircraft. And once the US starts selling its advanced stealth fighter jet to countries in the Middle East, Russia will be more likely to look to get in on the action by selling its fifth-generation jet, the Sukhoi Su-57, which is soon to be released.

The Israeli Air Force has for years warned against the threat of the growing arms race in the Middle East.

These factors can also figure into the US’s decision-making process in determining if a sale damages Israel’s edge.

The assessment process is generally performed through “very intense dialogue between the American and Israeli defense establishments,” Shapiro said. 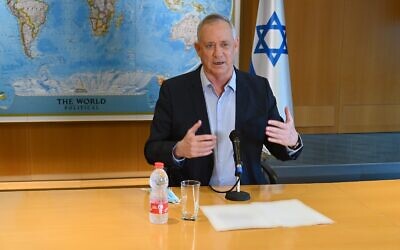 This ultimately results in the Israeli side giving a bottom-line assessment of how a new weapons system will affect it, he said.

As Gantz said, he and his ministry were kept in the dark about the UAE agreement and the reported sale of the F-35.

“We don’t yet know the views of the Israeli defense establishment. But I’m sure they’ll make those views known,” Shapiro said.

Time is on Israel’s side

In general, the Israeli Air Force opposes the introduction of additional advanced weaponry into the region, both due to the direct threat that it represents and because it feeds into a wider arms race in the Middle East, which has seen countries throughout the area stocking up on more powerful aircraft and anti-aircraft defense batteries.

However, Shapiro noted, there is technically no requirement for Israel to be involved, nor does Jerusalem officially sign off on US arms sales. Determining if a weapons system would negatively affect Israel’s military edge is ultimately an American decision, specifically by the executive branch. Congress can review these arms sales and question the Pentagon’s assessments regarding the impact on Israel, but it does not have the tools to actually block them.

But the decision also takes time, followed by a potentially lengthy negotiation process for the actual agreement between the US defense contractor — Lockheed Martin, in the case of the F-35 — and the other country, as well as the time it takes before the systems are delivered. (Israel, for instance, will be receiving the 50 F-35s it purchased in batches of two or three aircraft over the course of the next several years.)

“This is complicated. It’s not something that happens overnight,” Shapiro said.

A lot can happen in that time as well, including a potential change in the US administration after November’s election, said Shapiro, who supports Joe Biden publicly but is not officially connected to the campaign.

Shapiro also noted that Israel’s QME would not be the United States’ only consideration in selling F-35 fighter jets to the Emiratis. Abu Dhabi’s role in the devastating civil war in Yemen has also raised major concerns in Washington about further arms sales, he said.

While the US may in the end determine that the Israeli military still maintains an advantage over the UAE even with the F-35 — and overlook the UAE’s alleged human rights abuses in Yemen — it may take four or five years until the aircraft are actually delivered to Abu Dhabi.

“Even if the UAE gets approval, they’d be almost a decade behind Israel,” Shapiro said.