Moscow spent years building influence in the region—and lost it all playing hardball with Riyadh. 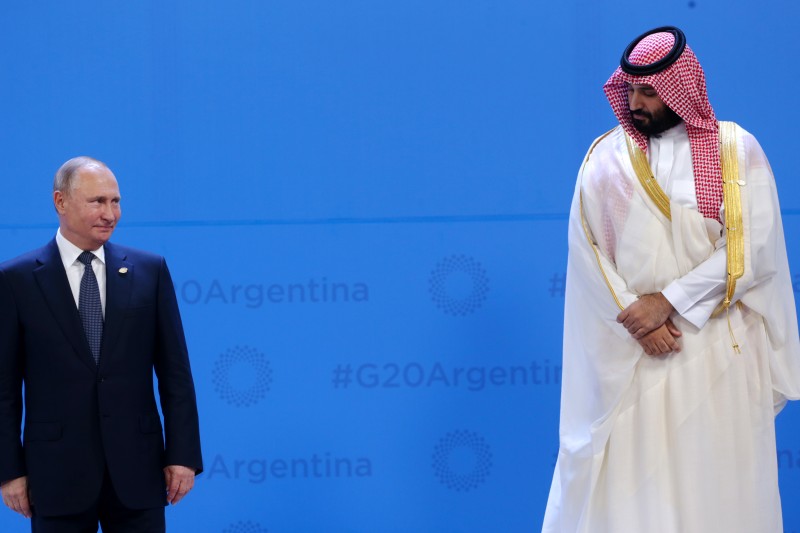 Russian President Vladimir Putin (left) looks over at Saudi Crown Prince Mohammed bin Salman as they line up for the family photo during the opening day of the G-20 Leaders’ Summit at Costa Salguero in Buenos Aires on Nov. 30, 2018. DANIEL JAYO/GETTY IMAGES

For the past few years, the foreign-policy community has collectively come to believe that a new era in international politics is emerging. The defining features of this post-post-Cold War order are great-power competition and the realignment of America’s relationships around the world. Nowhere is this more apparent than the Middle East, where U.S. allies are developing diplomatic, commercial, and military relationships with the very powers with which Washington is supposed to be competing—China and Russia—and precisely at a time when so many U.S. experts, analysts, officials, and politicians are expressing a desire to retrench from the Middle East. That has led many of the same folks to conclude that the new regional order will be forged in either Beijing or Moscow.

There are plenty of reasons to doubt that—some of which have become clearer in recent weeks. Most acute is the ongoing oil price war between Moscow and Riyadh, which has demonstrated how Russia has overplayed its hand in the region.

Almost 30 years after the end of the Cold War, leaders around the Middle East are indeed more welcoming of the exercise of Russian power. With the ideological baggage of Soviet communism gone and the United States proving itself to be a spent, feckless, incompetent force, Moscow has seemed to regional leaders not quite an alternative to Washington but at least a more constructive regional player. The contrast between the way former U.S. President Barack Obama is perceived to have abandoned Egyptian leader Hosni Mubarak and Russian President Vladimir Putin’s intervention in Syria to save Bashar al-Assad made a big impression on Arab potentates. Added to the negative perception of the United States is the fact that Middle Eastern economies and political systems have more in common with Russia—their dependence on oil revenues, their authoritarianism—than with the United States.

Washington has contributed to their developing relationship. By fracking its way to what U.S. President Donald Trump calls “energy independence” (whatever that is supposed to mean), the United States has flooded markets with natural gas and oil. That has created downward pressure on energy prices, which is why in 2016 members of OPEC (but really Saudi Arabia) and Russia agreed to limit production in the service of higher prices.

The agreement, which was actually the result of a previous oil war during which the Saudis refused to cut production hoping to damage U.S. shale producers (it didn’t), stabilized energy markets. The price of a barrel of oil returned to a level that helped the Saudis and Russians pay for the things they have wanted to do, whether prosecute wars—see Ukraine, Syria, Yemen, Libya—and invest in social transformation. Saudi Crown Prince Mohammed bin Salman’s Vision 2030 is expensive, after all.

The agreement was about oil production, but it held out the prospect of a changed configuration of relations in the Persian Gulf. For the Saudis, the Russians were a hedge against an unpredictable United States, where, despite political dysfunction and polarization, there seems to be broad agreement on the need to leave the Middle East. Russia, in turn, got a boost in its regional profile and influence by working with Saudi Arabia. Whether this was actually at America’s expense is debatable, but perception is often more important than reality. At the least, Putin wanted everyone to believe that he could nudge the Saudis—as he has done with the Turks and Egyptians—away from the United States. Setting Russian trolling aside, this is why after Trump did not respond militarily against Iran for its attacks on Saudi oil processing facilities in September 2019, Putin offered to sell the Saudis the S-400 air defense system (the same weapon system that Turkey purchased from Moscow, straining ties between Washington and Ankara).

Yet for all the apparent overlap of Saudi and Russian interests, especially in energy, the Saudi-Russian era was not to be. The Russians have only themselves to blame. Since even before the killing of the Washington Post journalist Jamal Khashoggi, Mohammed bin Salman was portrayed as impetuous and highhanded. That he has proved to be so on any number of previous occasions makes it easy to believe that recklessness led to the steep drop in oil prices over the last month. But that is not the case. The Saudis came to a meeting of OPEC+ (which includes 10 nonmembers of the oil cartel, including Russia) in early March and said basically the following: There is even less demand for our products now given the global pandemic, so let’s take a million barrels off the market. From a Saudi perspective, this seemed to be an entirely reasonable position, but the Russians rejected it, saying they wanted to assess the full effects of the novel coronavirus on the global economy before cutting production. This didn’t make a lot of sense because by then it was clear to most that the coronavirus was forcing economies to shut down one after another and thus depressing demand for oil and gas.

More likely, the Russians did not want to cut production because they were more interested in hurting U.S. shale producers and snatching market share from the Saudis. It was the latter that made the Saudis so angry. They are intent on not being played for suckers. Saudi officials have proposed that they, the Russians, the United States, and a number of other players cut production proportionally. According to the Saudis, the Russians want them to cut relatively more than the others. The Russian position is stoking fears in Riyadh that whatever agreement the Saudis make with Moscow, Russia will still have motive to cheat, undermining Saudi Arabia’s revenue and market share—the worst of all possible worlds. As a result, Saudi Arabia walked away from the meeting vowing to increase production to 10 million barrels per day and began offering steep discounts on its oil. This was an effort to intimidate the Russians and coerce them back to the negotiating table, but the Russians declared they could withstand low oil prices. The Saudis said they could do the same, and global oil prices plunged.

The United States seems to be a casualty of this oil war; members of Congress from states where the fossil fuel industry is important have been especially distressed. But it’s hard to find any winners. Perhaps only the Chinese qualify, as they can look forward to cranking up their post-coronavirus economy with the help of cheap oil.

Analysts expect that the oil war may come to an end during Thursday’s meeting of OPEC+. Either way, one likely outcome of this episode will be an end to the idea that Moscow will play a significant role in establishing a new regional order. In a different context, the Italian Marxist political theorist Antonio Gramsci once wrote about the “interregnum” after the death of one order while the “new [order] cannot be born.” It is in this period that Gramsci observed “morbid symptoms appear.”

We are in such a moment now, which is why those searching for a new order should not mistake the apparent strengthening of Saudi-Russian ties in the previous few years for anything other than a function of decay, not a feature of an emerging and novel global system.