Jewish Electorate Institute survey finds that 91% of American Jews identify as pro-Israel, but Israel is not driving the community’s vote 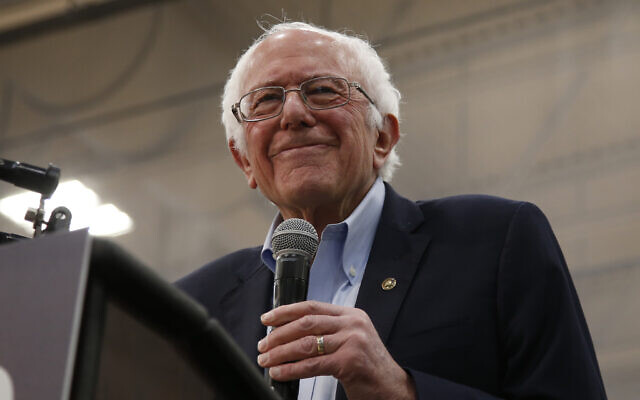 WASHINGTON — Democratic presidential frontrunner Bernie Sanders would overwhelmingly outperform US President Donald Trump with Jewish voters in a head-to-head match-up this fall, according to new polling from the non-partisan Jewish Electorate Institute (JEI).

The self-proclaimed democratic socialist would defeat Trump with the demographic group 65% to 30%, despite only 52% of American Jews having a favorable view of Sanders and 45% having an unfavorable view of him, the survey found.

Trump is far more unpopular with the US Jewish community. Sixty-six percent of the poll’s respondents disapprove of the job he’s doing in office.

Indeed, according to JEI, every 2020 Democratic presidential candidate would defeat Trump handily with Jewish voters in a general election.

But Sanders leads the pack after winning the New Hampshire primary and Nevada caucuses and claiming the highest number of pledged delegates to date.

Only 32% of Jewish voters characterized Israel as “one of the most important” issues to them in the upcoming election. Of far greater concern to Jews are healthcare, medicare and social security, and gun safety.

Nevertheless, US Jewish voters remain highly supportive of the Jewish state: 91% said they were generally pro-Israel, while 56% identified themselves as “critical” of the Netanyahu government.

The survey also found that the vast majority of American Jews identify as Democrats over Republicans — roughly 62-25%, with the rest having no party affiliation.

While a large majority of US Jewish voters disapprove of Trump’s performance on domestic policy issues — from taxes to healthcare and reproductive rights — a slim majority approves his management of US-Israel relations.

Fifty-one percent said they supported his Israel policies; 39% said they didn’t. A slightly larger majority (52%) said they approved of his decision to recognize Israeli sovereignty of the Golan Heights.

The US Jewish community appeared much more divided on Trump’s decision to move the American embassy from Tel Aviv to Jerusalem, which roiled the White House’s relations with the Palestinians. Whereas 45% approved of the move, 42% said they were opposed to it.

American Jews are similarly split on a dimension of the president’s peace plan that would allow Israel to annex the existing West Bank settlements: 44% approve of that policy and 40% disapprove of it.

Breaking with past US administrations, the Trump administration released its long-awaited plan last month, envisioning the creation of a Palestinian state in about 70% of the West Bank, a small handful of neighborhoods in East Jerusalem, most of Gaza and some areas of southern Israel — if the Palestinians recognize Israel as a Jewish state, disarm Hamas and other terror groups in the coastal enclave, and fulfill other conditions.

The proposal also allows Israel to annex settlements, grants the Jewish state sovereignty over the Jordan Valley and overriding security control west of the Jordan River, and bars Palestinian refugees from settling in Israel.