Bernie Sanders is riding the intellectual currents that the party and its elites have nurtured. 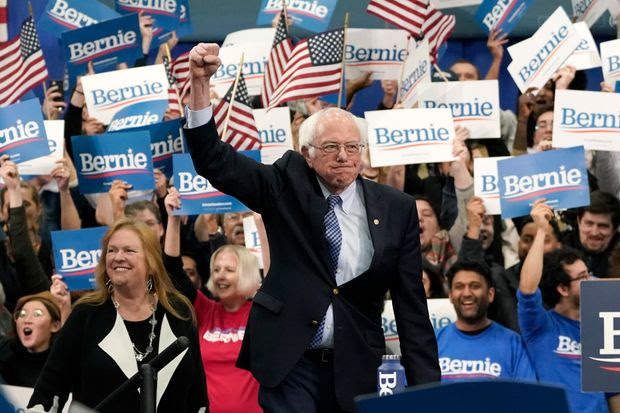 Bernie Sanders’s victory in New Hampshire on top of his tie in Iowa makes him a favorite for the Democratic presidential nomination. Hard to believe, but in a winnable race against President Trump the opposition may nominate a socialist who wants the government to control energy production and health care, who wants nationwide rent control, and who calls America a “racist society from top to bottom.” No wonder Democrats like James Carville are in agony.

The Vermont revolutionary’s victory portends a long primary battle, unless Democratic voters elevate a single mainstream candidate who can challenge him. Mr. Sanders will get his 25% to 30% primary after primary, racking up delegates on his way to the convention. If other candidates keep dividing the other votes, he will be hard to stop, as Mr. Trump was for Republicans in 2016. Even if a single alternative emerges, Mr. Sanders won’t go down without a ferocious intra-party fight.

How did this happen? How did Mr. Sanders move from the socialist fringe to the brink of controlling the Democratic Party? The Senator’s dogged persistence across decades and especially the last four years is part of the explanation.

Yet Mr. Sanders wouldn’t be this close to the White House if not for the complicity of Democrats and the liberals who dominate the academy and media. Rather than fighting the ideas that animate him and his millennial voters, they have indulged and promoted them. They created the political environment in which he could prosper. Consider the intellectual currents he is riding:

• The attack on capitalism and markets.

Like Tony Blair in Britain, Bill Clinton’s New Democrats accommodated the economic lessons of Ronald Reagan. By the Obama Presidency, all that had changed. The left blamed markets for the 2008 panic and crash—not failed government regulation, subsidies for bad housing risks, or too loose monetary policy.

Then came the socialist intellectual comeback led by French economists Thomas Piketty (“Capital”), Emmanuel Saez and Gabriel Zucman. Inequality replaced growth as the top economic policy concern. The economists resurrected the anti-market ideas and tax policies of the 1930s, and they were celebrated by the Democratic press. Occupy Wall Street became the street version of this movement and was praised by no less than Barack Obama.

It’s a short ideological hop from there to 60% marginal tax rates, wealth taxes, the demonization of billionaires, and equating business success with “corruption,” as Mr. Sanders and Elizabeth Warren do. Millennials heard Democrats assail “the rich” for years, but Bernie has the courage of their pretensions.

• The rise of left-wing intolerance on campus.

From the late 1960s on, the political left flooded into the academy and rewrote the curriculum to fit its ideological fashions. American history was dogmatized, often according to the work of Howard Zinn. The Western canon was purged. Conservatives resisted but lost as liberals accommodated the revolution.

First the humanities, then the social sciences and now even the sciences have been forced to bend to identity politics. Race, gender, class and sexual orientation became preoccupations in scholarship and tenure. This is the academic culture that nurtured millennials and Gen Z to believe in microaggressions and the “cancel culture” that now torments Democrats who disagree.

• The critique of America as irredeemably racist.

Identity politics took an especially sharp turn on race with the police shootings of 2014 and 2015. Black Lives Matter erupted and demanded that politicians bow to its concerns. No Democrat has dared to challenge it, or to defend 50 years of racial progress or the reduction in crime that has saved black lives.

Author Ta-Nehisi Coates became the darling of white liberals with his castigation of America as systemically racist. The New York Times has tried to replace 1776 with the 1619 arrival of the first slaves to North America as a racist America’s founding event.

• Climate change as religion, not science.

A generation of apocalyptic climate education has made what was a matter of temperatures and scientific modeling into a cultural identity. No dissent is tolerated, and the solutions must be radical and immediate. Mr. Sanders was quick to sense the political possibility and grab onto the Green New Deal.

These are among the beliefs feeding the radicalism and resentment of the Sanders campaign. Bernie started his political career as a Marxist focusing on the economic class struggle. But he has adapted to these other intellectual streams, and this year he has adopted identity politics with a fervor that out-woked Julián Castro and Kamala Harris.

Yet rather than challenge Mr. Sanders, the other candidates have given him a pass on everything besides Medicare for All. They have adopted his tax and redistribution arguments, if not all his policies. They mimic his denunciations of America as racist.

With the exception of Joe Biden, they have also accepted his anti-interventionist foreign policy. The press corps has almost seemed to cheer Mr. Biden’s collapse in Iowa and New Hampshire. Yet now the Democratic media find themselves fearing that Mr. Sanders might win the nomination and lose to Mr. Trump. Their refusal to challenge the political left makes them Bernie’s accomplices.

The tragedy is that this year, even more than most years, the country needs a sensible and centrist opposition party and nominee. Millions of Americans like the results of Mr. Trump’s policies but not his divisive brand of politics and personal behavior. They are looking for an alternative who doesn’t scare them. The agony of the Democrats is that years of bowing to the left means they may nominate someone who makes Mr. Trump look like the safer choice.