Trump’s reversal of Obama’s hostile policies towards Israel got the world’s attention. They made the likes of Iran and China realize he meant it when he said that he was adopting policies that would be good for America and bad for its foes. By standing with Israel, Trump also showed other spurned allies America could be trusted again. 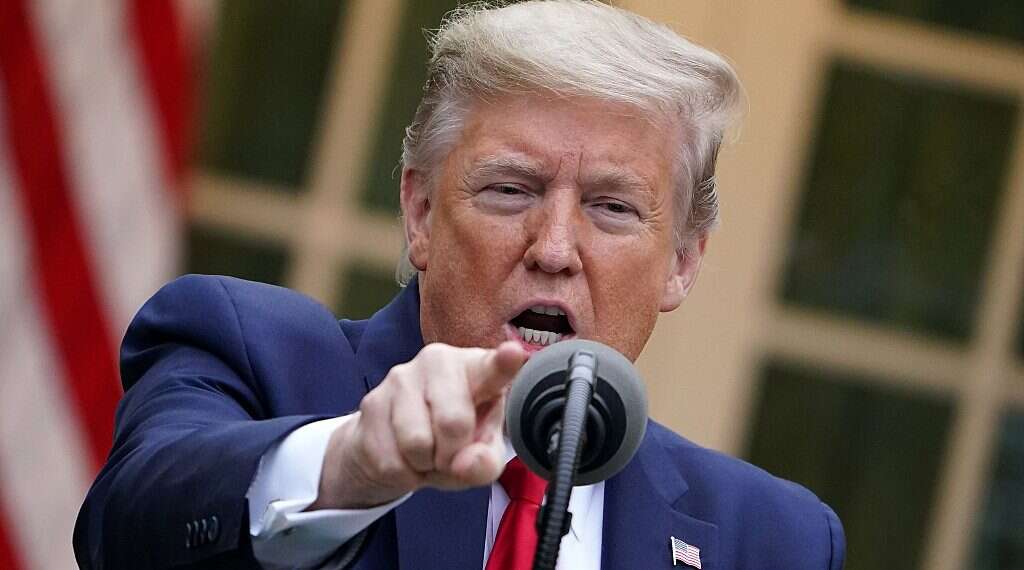 Donald Trump was elected four years ago because Americans wanted to save their country. Both in domestic and foreign policy, in the eighth year of Barack Obama’s presidency, America was going off the rails. At home, Obama’s identity politics were tearing the country apart. As is now graphically apparent, identity politics are not about expanding justice. They are geared towards tearing Americans away from one another and undermining the very idea of America.

Abroad, America had become the laughingstock of its enemies and the worst nightmare of its friends, as Obama and his merry band of foreign policy “experts” abandoned and denigrated allies and reorganized America’s foreign policy around a commitment to appeasing and kowtowing to America’s worst foes, first and foremost, Iran and the Muslim Brotherhood.

Trump rose to the top of a crowded field of Republican candidates because voters believed that the iconoclast who made good deals because he cared about the result and didn’t care what people thought of him would make America great again. They believed they could trust him to tell the truth and do what needed to be done, no matter how many inbred “experts” told him differently.

And America needed a leader who wouldn’t shy away from controversy.

In 2016, with Obama’s backing, the radical, anti-American, anti-police #BlackLivesMatter group was ascendant. Police had targets on their backs. Two weeks before the Republican Convention in July 2016, five police officers were massacred in Dallas after anti-police protests in the city. Days before the convention, three policemen were murdered and four were wounded in another massacre in Baton Rouge, Louisiana.

Defending law enforcement officers and pledging to restore safety to America’s cities was a major theme of Trump’s convention address and a major pledge of his campaign. And he delivered.

According to FBI data, after rising sharply in the last years of the Obama presidency, violent crime in America went down in every year of Trump’s presidency.

Those gains are now being reversed now. The radical mobs Trump pledged to remove from America’s streets have returned. Waving the banner of identity politics and spewing hatred of America they are wreaking havoc, terror, devastation, and crime. Last week saw a 100% rise in the number of murders and shootings in New York City. Los Angeles experienced a 250% rise in shootings and murder. Last weekend, Chicago saw the highest murder toll in a 24-hour period in 60 years.

Businesses have been looted and destroyed. And the violence continues and mutates daily. A mob of Antifa thugs took over six square blocks of Seattle and is working to reenact its conquest in other cities. Progressive mayors and governors are responding by kneeling and blaming Trump.

The police, for their part, are walking away. As police officer Travis Yates wrote this week in a stunning essay at the Law and Officer website, police officers are demoralized by the politically powerful mobs of radical leftists that demonize them. The rational choice for officers today is to quit, he wrote bitterly.

This crisis is tailor-made for Trump’s leadership. Trump was elected to defang the commissars of political correctness that terrorized Americans intellectually, socially, racially, and physically. When he said, “We cannot afford to be politically correct anymore,” he was speaking for hundreds of millions of Americans who were afraid to speak out lest they lose their jobs or face social ostracism for harboring dissident views of identity politics.

Now the commissars have become wardens and all of America is their prison. Americans are now expected to kneel when the Star Spangled Banner plays and disavow American history while swallowing whole a false, malicious new history that claims America has been a force for evil at home and worldwide since it was nothing more than a sparkle in a racist colonialist’s eye.

Trump’s approval ratings dropped 10 points in the space of a week. It’s possible that terrified voters are afraid to tell pollsters the truth and that the numbers are false. But its also possible that the drop is real.

In the face of this chaos and madness in the streets of America, Trump is not doing what he does best. He is not standing center stage defending the father and mother holed up at home, terrified of the mob marching down their street or looting their store. He is not protecting high school and college students who must accept the mob’s rules or face ostracism and failing grades. He is doing many things, to be sure. But they are scattershot and uncertain.

Trump has the advisers in place to put together a plan for immediate implementation. Roundtable meetings will not suffice. Actions must be taken to end mob rule, restore order, stand with police and protect the silenced, terrified citizens worried about their safety, their families, and their freedom to love their country.

Everything Trump entered politics to oppose is returning and threatening to take over America for good.

Now is his moment to act forthrightly and decisively. Now is the time for Trump to be Trump.

The same holds in foreign affairs. Administration officials – Trump loyalists – are down in the dumps right now. Trump’s low polling numbers may or may not reflect the true state of affairs but they harm his ability to influence foreign actors. The leaders of Germany and France are practically frothing at the mouth in expectation of deliverance from the first US president in memory that actually expected them to act like real allies, pay their share of the NATO budget and stand with the US and against Iran as it sprints towards the bomb and against China as it uses its 5G network to leapfrog over the US.

The Chinese are betting that their virus, which capsized the Trump economy will spell the demise of their nemesis. And the Iranians are so sure that he will be defeated that they are enriching uranium in broad daylight.

When he came into office, the first step Trump took to make clear to all takers that America would no longer be abandoning its interests and its allies and would stand with Israel. This wasn’t a move – as his haters claimed – to rally his evangelical base. It was a strategic play.

Israel is not just the US’s most loyal and steady ally in the Middle East, it is also the ally that was most brutally betrayed by Obama and despised by Obama’s progressive supporters. It makes sense that the likes of Black Lives Matter and the BDS thugs are joined at the hip and united in their hatred of the Jewish state.

Police are the guarantors of America’s domestic peace. They are charged with keeping Americans safe and make it possible for America to succeed and prosper.

The strength of America’s alliance with Israel is a reflection of the strength of American power. Since Israel shares the same values and interests as the US, a strong Israel serves as an extension of US power in the Middle East. So too, Israel is the bogeyman of the foreign policy establishment worldwide. So when America stands with Israel it is standing against the foreign policy mob. Standing up to the mob is not for the faint of heart. So by standing with Israel, the US proves its courage and power.

Trump’s reversal of Obama’s hostile policies towards Israel got the world’s attention. They made the likes of Iran and China realize he meant it when he said that he was adopting policies that would be good for America and bad for its foes. By standing with Israel Trump also showed other spurned allies America could be trusted again.

On January 27, Trump presented his vision for peace in the Middle East. It is based on a rejection of the “experts” collective “wisdom” regarding the region that had formed the basis for 25 years of failed US Middle East policy. Contrary to the consensus view, Trump understood Israel wasn’t responsible for the absence of peace.

The source of war, radicalism, and terrorism in the Middle East was radical Islam and the Arab world’s rejection of the Jewish people’s right to freedom and sovereignty in their homeland. The rejectionist Palestinians were the apotheosis of the Arab world’s pathologies.

Trump’s plan recognizes that the first step to peace is for Israel to render permanent its control in Judea and Samaria because only by doing so will it kill the myth that Israel is an “occupier” in its ancestral homeland and extinguish the hope of the Palestinians and their supporters that Israel can be destroyed. Peace can be accomplished only after Israel’s legitimacy and security are taken off the table.

So the first step on Trump’s road to peace is for Israel to apply its laws to all of its communities in Judea and Samaria and to the Jordan Valley, Israel’s eastern frontier with Jordan. Once that step is implemented, the Palestinians will be expected to take specific actions, like ending their payments to terrorists to show that they are willing to make peace. Peace itself, which can lead to a Palestinian state, requires the Palestinians to do basic things like accept Israel and dismantle Hamas.

It is hard to know if peace will ever come. But if it ever does, it will be on the basis of the Trump plan. Because unlike all the plans that preceded it, Trump’s peace plan is based on reality.

Unfortunately, the excitement that greeted Trump’s plan was overtaken by the multiple crises of more recent months. Moving it forward is likely not on the top of Trump’s list of priorities.

That list ought to be reconsidered though. Now is the time for decisive action. Trump’s domestic enemies and international rivals are using his distraction to try to undermine his revolutionary accomplishment. Democrats are threatening Israel with a downgrading of relations if Israel dares to apply its laws to the areas envisioned in Trump’s plan. Germany is leading Europe’s passive-aggressive charge with threats of sanctions if Israel implements its sovereignty plan in accordance with Trump’s vision for peace. Threatening Israel is seen by these forces as a means to begin dismantling all of Trump’s foreign policy achievements and undermining the public’s perception of his competence.

If Trump wishes to defeat his opponents and restore his credibility, the first thing he should do is call on Israel to apply its sovereignty to its communities in Judea and Samaria and to the Jordan Valley in accordance with his blueprint for peace. Doing so will restore faith in Trump’s seriousness of purpose, and increase his credibility at home and abroad.

The American voters elected Trump to be Trump. They will reelect him if he sticks to his guns. Staring down the mob, defending the police, and protecting the public; standing with Israel, and advancing his vision of reality-based peace are the two legs on which he built much of his pre-coronavirus success. Now they are the two main bases on which he will reassert his leadership and win his second term.