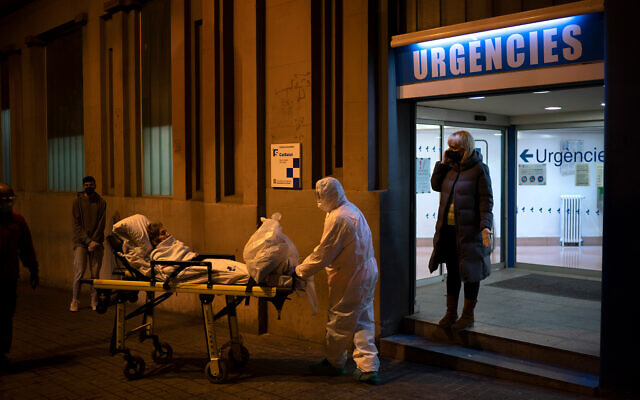 An elderly COVID-19 patient is transferred to an ambulance from a Hospital in Barcelona, Spain, March 27, 2020. (AP/Felipe Dana)

NEW ORLEANS (AP) — New Orleans rushed to build a makeshift hospital in its convention center Friday as troubling new outbreaks bubbled in the United States, deaths surged in Italy and Spain and the world warily trudged through the pandemic that has sickened more than a half-million people.

Punctuating the fact that no one is immune to the new coronavirus, it pierced even the highest echelons of global power, with British Prime Minister Boris Johnson becoming the first leader of a major country to test positive.

As the death toll continued to climb in France, health workers there received a huge show of gratitude — from the Eiffel Tower. “Merci,” French for “Thank you,” and “Stay at home” in English were emblazoned in lights Friday night on Paris’ iconic landmark.

While New York remained the worst hit city in the US, Americans braced for worsening conditions elsewhere, with worrisome infection numbers emerging in New Orleans, Chicago and Detroit.

“We are not through this. We’re not even halfway through this,” said Joseph Kanter of the Louisiana Department of Health, which has recorded more than 2,700 cases, more than five times what it had a week ago. The United States became the first country to surpass 100,000 infections on Friday, according to a count kept by Johns Hopkins University. 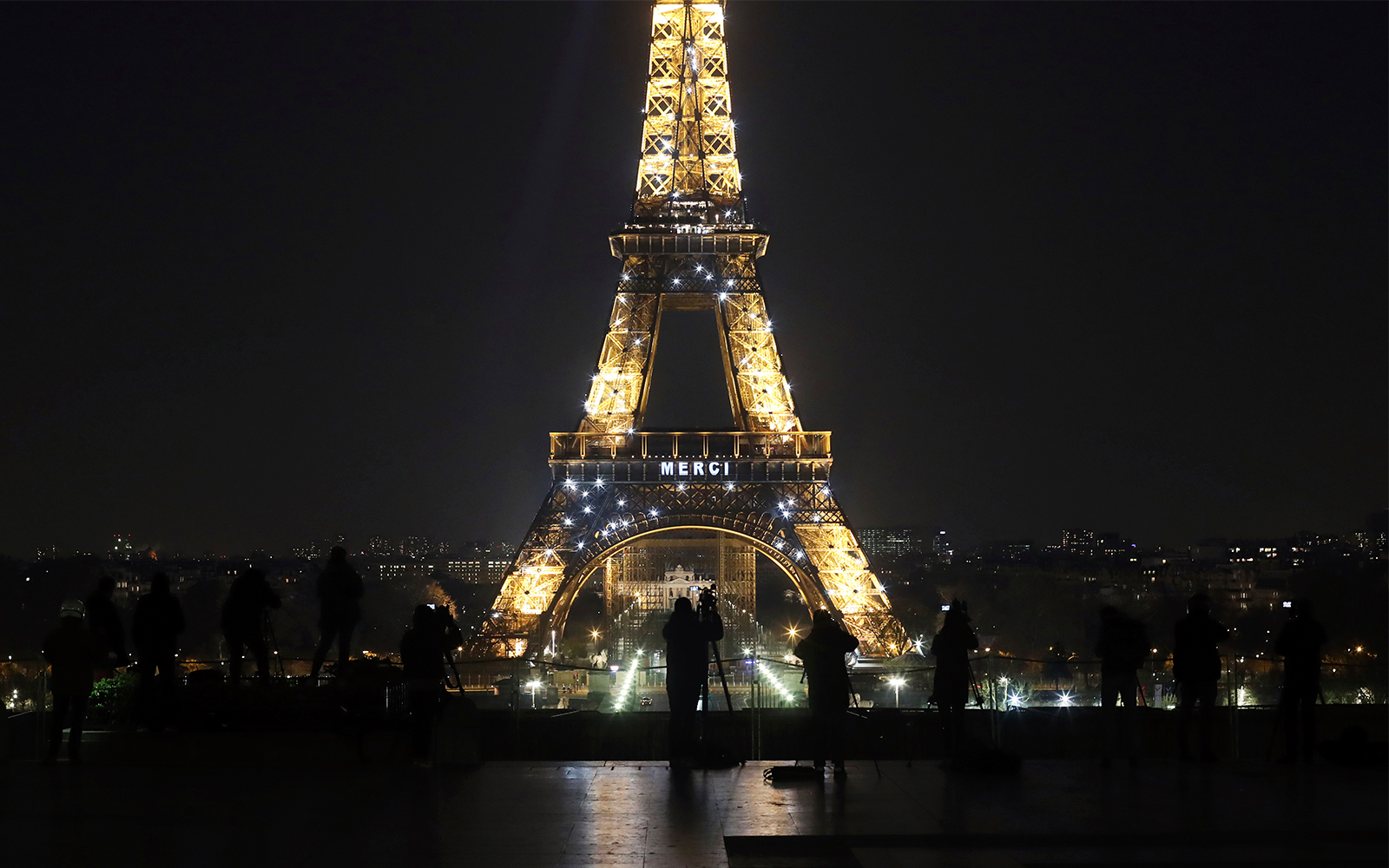 Media stand in front of the Eiffel Tower where the word “Merci,” French for “Thank you,” is emblazoned as France’s coronavirus death toll continued to climb, Paris, March 27, 2020. (AP/Thibault Camus)

New Orleans’ sprawling Ernest N. Morial Convention Center, along the Mississippi River, was being converted into a massive hospital as officials prepared for thousands more patients than they could accommodate. The preparations immediately conjured images of another disaster, Hurricane Katrina in 2005, when the convention center became a squalid shelter of last resort in a city that has braved a string of storm hits, not to mention great fires and a yellow fever epidemic in centuries past.

As the new health crisis loomed, economic catastrophe had already arrived in the city, where many already live in poverty and the tourism industry has screeched to a halt.

“I’ve never been unemployed. But now, all of a sudden: Wop!” said John Moore, the musician best known as Deacon John, who has no gigs to perform with much of the city shut down. “It ain’t just me. It’s everybody.”

In New York, where there are more than 44,000 cases statewide, the number of people hospitalized with COVID-19 passed 6,000 on Friday, double what it had been three days earlier.

Governor Andrew Cuomo called for 4,000 more temporary beds across New York City, where the Jacob K. Javits Convention Center has already been converted into a hospital. 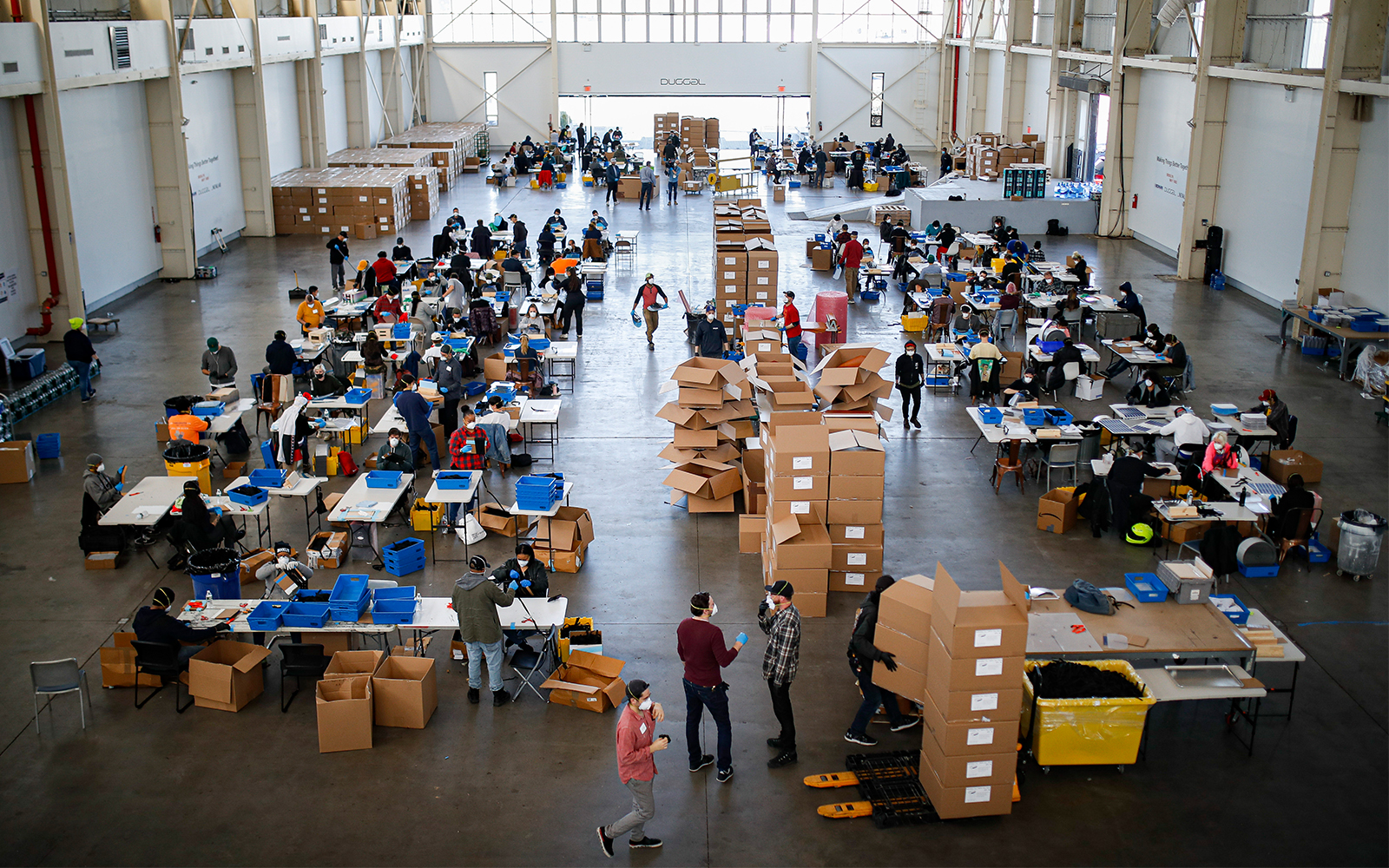 US President Donald Trump, after earlier rejecting Cuomo’s pleas for tens of thousands more ventilators, and the governor’s calls to use the Korean War-era Defense Production Act, invoked the law Friday, ordering General Motors to begin manufacturing the breathing machines.

Trump signed a $2.2 trillion stimulus package, after the House approved the sweeping measure by voice vote. Lawmakers in both parties lined up behind the law to send checks to millions of Americans, boost unemployment benefits, help businesses and toss a life preserver to an overwhelmed health care system.

More than 590,000 people have contracted the virus around the world and roughly 26,000 have died. While the US now leads the world in infections, five countries exceed its more than 1,500 deaths: Italy, Spain, China, Iran and France.

Dr. John Brooks of the US Centers for Disease Control and Prevention warned Americans remained “in the acceleration phase” of the pandemic and that all corners of the country were at risk.

“There is no geographic part of the United States that is spared from this,” he said. 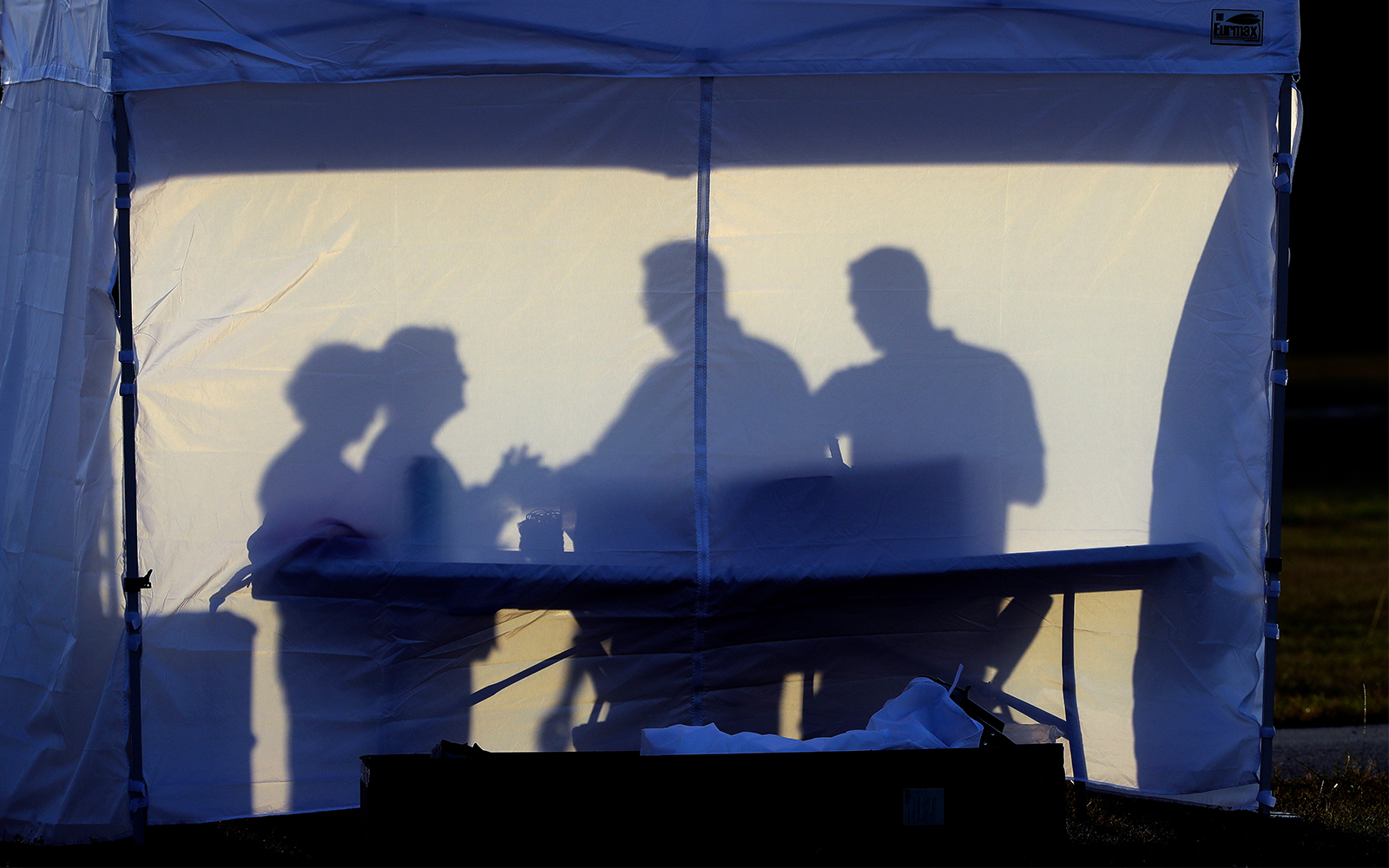 Medical personnel silhouetted against the back of a tent before the start of coronavirus testing in a parking lot outside of Raymond James Stadium in Tampa, Florida, March 25, 2020. (AP/Chris O’Meara)

Trump, who has repeatedly referred to the outbreak as a “Chinese virus,” struck a different tone Friday, tweeting after the call that “China has been through much & has developed a strong understanding of the Virus. We are working closely together. Much respect!”

Just finished a very good conversation with President Xi of China. Discussed in great detail the CoronaVirus that is ravaging large parts of our Planet. China has been through much & has developed a strong understanding of the Virus. We are working closely together. Much respect!

In Europe, Italy recorded its single biggest 24-hour rise in deaths, with 969 more victims, to bring its total number of fatalities to 9,134. The country now has more than 86,000 cases, surpassing China to record the grim distinction of the second-most infections in the world, behind the US.

Italian President Sergio Mattarella called it “a sad page in our history.”

Italian epidemiologists warn that the country’s number of cases is likely much higher than reported — perhaps by five times — although two weeks into a nationwide lockdown the daily increase seems to be slowing, at least in northern Italy.

“It is something devastating,” said the Reverend Mario Carminati, whose church in the tiny Lombardy town of Seriate has been used to hold coffins of the dead before they are taken by military convoy for cremation. 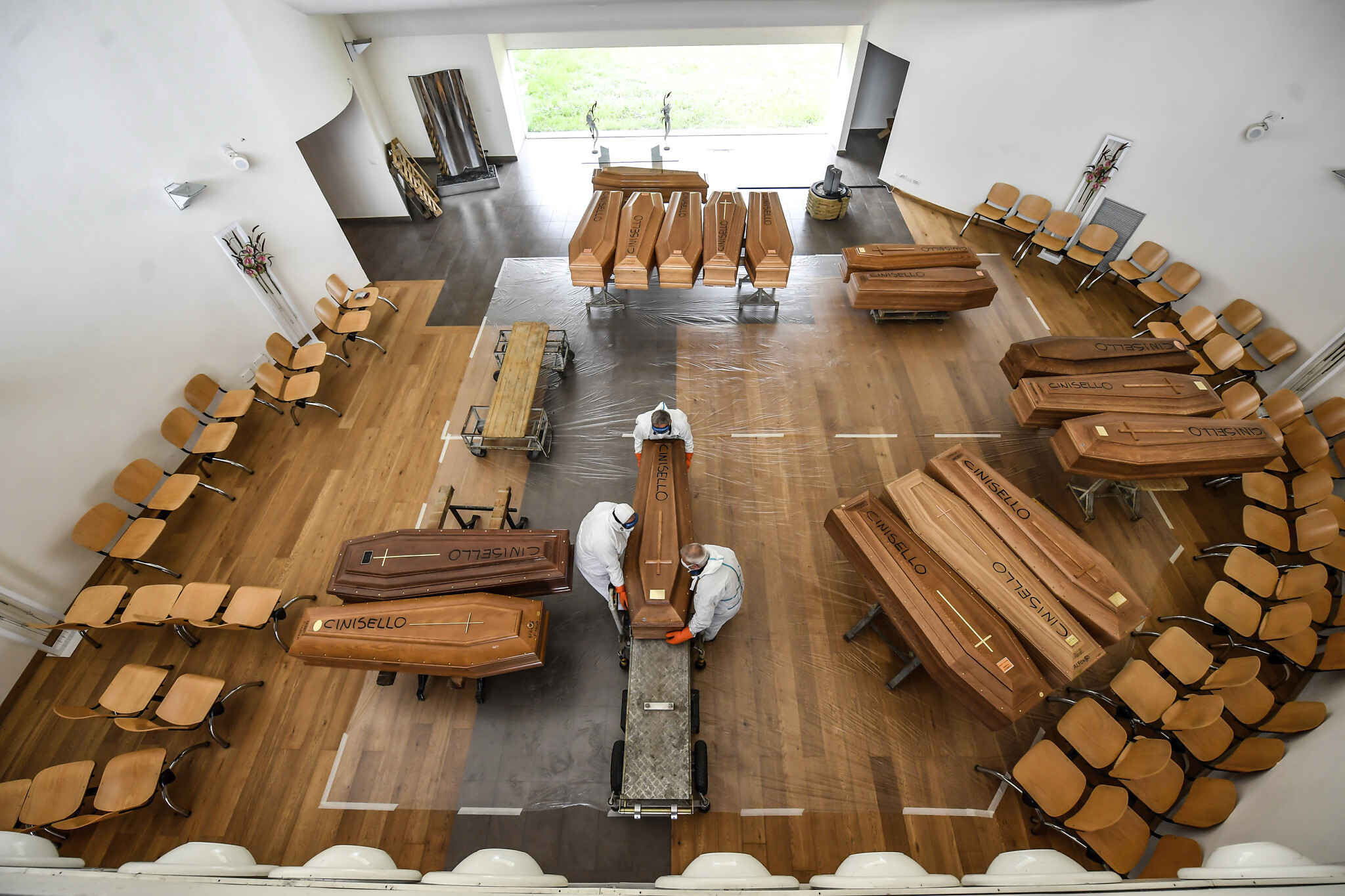 Coffins arriving from the Bergamo area, where the coronavirus infections caused many victims, being unloaded from a military truck that transported them in the cemetery of Cinisello Balsamo, near Milan in Northern Italy, March 27, 2020. (Claudio Furlan/LaPresse via AP)

Spain, with the world’s fourth-biggest number of cases, reported another 7,800 infections for a total of more than 64,000. The country said health workers accounted for about 15 percent of its cases.

Deaths in Spain climbed past 4,900 — the world’s second-highest total after Italy.

In Britain, Johnson’s office said the prime minister was tested after showing mild symptoms for the coronavirus. He was self-isolating and continuing to lead Britain’s response to the pandemic.

“Be in no doubt that I can continue, thanks to the wizardry of modern technology, to communicate with all my top team, to lead the national fightback against coronavirus,” Johnson said in a video message, adding that he had a temperature and persistent cough.

Several weeks ago, Johnson had pledged he would “go on shaking hands with everybody.”

British Health Secretary Matt Hancock, who has been at the forefront of the nation’s virus response, also was confirmed to be infected. Prince Charles previously said he tested positive. 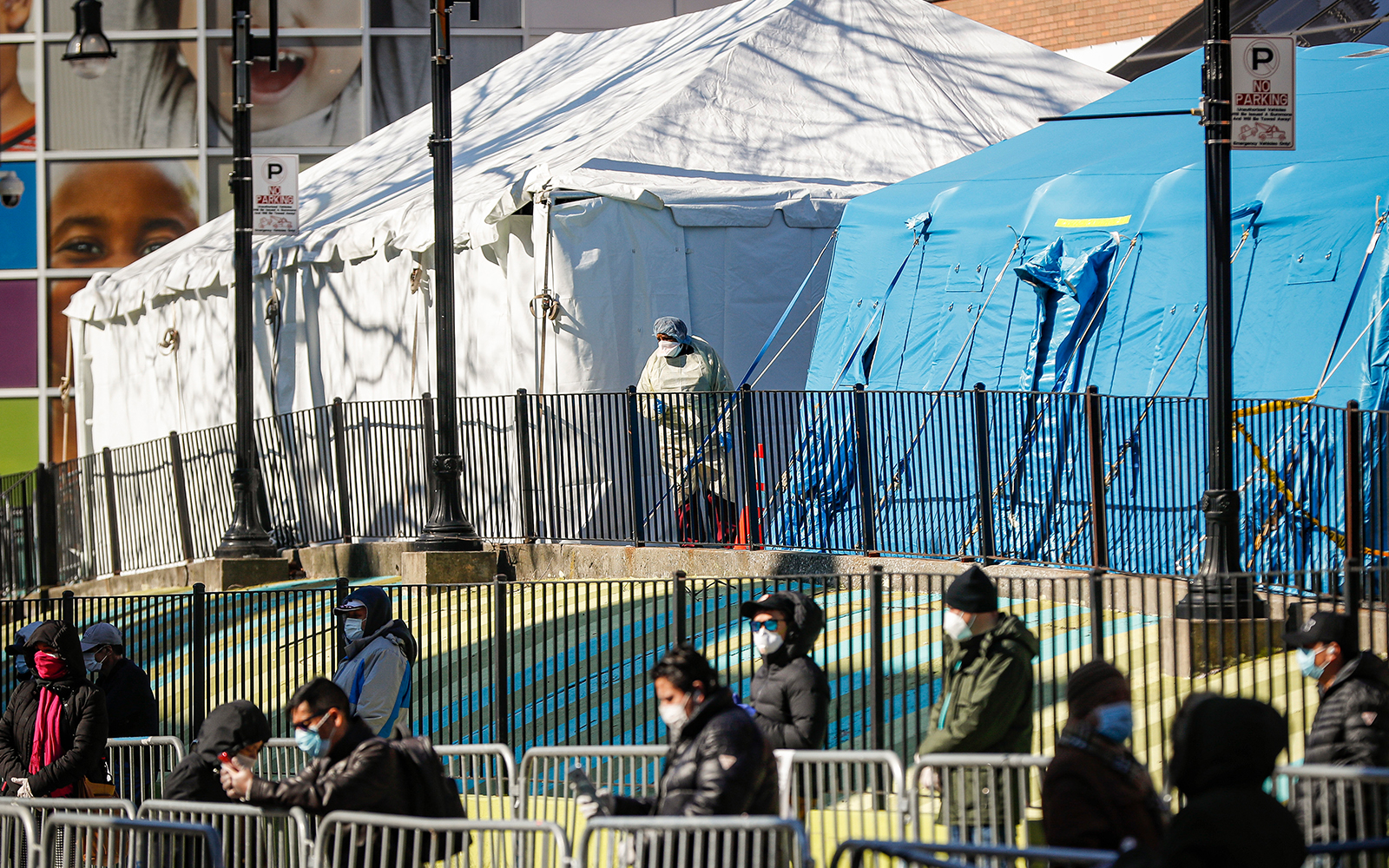 A medical worker looks out onto a line of patients waiting for COVID-19 testing outside Elmhurst Hospital Center in New York, March 27, 2020. (AP/John Minchillo)

Around the world, the pandemic threatened people living in places with little means to respond.

India launched a massive program to feed hungry day laborers after a lockdown of the country’s 1.3 billion people put them out of work. Iran’s military hurriedly finished a 2,000-bed field hospital to accommodate the worst outbreak in the Mideast. In Indonesia, Saudi Arabia, Indonesia, South Africa and elsewhere, the count of the infected passed 1,000 people and worries persisted that it would only get worse.

For most people, the coronavirus causes mild or moderate symptoms, such as fever and cough that clear up in two to three weeks. But for others, especially older adults and people with existing health problems, the virus can cause more severe illness, including pneumonia and death.

Johns Hopkins reported more than 130,000 people have recovered, about half in China.

Stocks skidded in Europe and on Wall Street, where major indexes closed down about 3%, giving up some of the gains the market had piled up over the previous three days.

The head of the International Monetary Fund said it was clear that the global economy has now entered a recession that could be as bad or worse than the 2009 downturn.