T. Belman. As I have maintained, the Plan is only a vision and the boundaries of the potential statelet will be open for negotiations.  It makes sense to liberate the enclaves.  But that is a separate issue from the extension of Israeli law to the Jordan valley which should take place, regardless.  The next week is crucial.

Among ideas floated would be redefining some Area C lands as Area B; Israel said to present edited version of Trump map that addresses enclaves 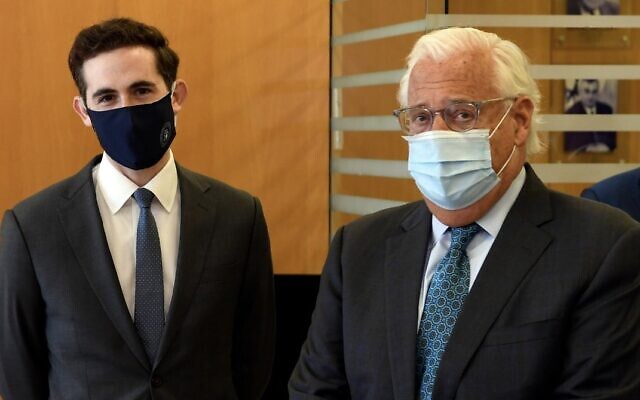 US peace envoy Avi Berkowitz (L) with US Ambassador to Israel David Friedman in Jerusalem on June 29, 2020. (Avi Berkowitz/Twitter)

The Trump administration is reportedly pushing Israel to offer the Palestinians some sort of compensation in exchange for the unilateral annexation of some of the West Bank land they want for their future state.

Among the ideas is transferring an area to the Palestinians where they can build without limits, or redefining some Area C lands, where Israel maintains full control, as Area B, where Palestinians have civil control, Channel 12 reported Tuesday.

Meanwhile, the Kan public broadcaster reported that Israeli officials have passed along to the White House a slightly edited version of the Trump peace plan’s conceptual map that better connects a group of at least 15 isolated settlements to the rest of the West Bank territory the proposal envisions Israel annexing.

While the plan sees these communities being transformed into enclaves surrounded by the future Palestinian state, the report said that the edited map drawn up by the Israeli team would allow for the annexation of additional land surrounding those settlements so that they do not remain enclaves. In exchange, the Israeli side redrew the conceptual map to give to the Palestinians land in the Judaean Desert that Israel views as less integral.

While not specified in the report, the Israeli-edited map published by Kan appeared to transfer parts of the so-called Triangle of Arab towns just west of the northern West Bank, to the future Palestinian state. It is an idea that Prime Minister Benjamin Netanyahu claimed he would not pursue after the residents of those areas voiced massive opposition to the prospect, which was included in the Trump plan.

Netanyahu met earlier Tuesday with US Ambassador David Friedman and special Middle East envoy Avi Berkowitz, a day ahead of his self-imposed date for beginning to annex as much as 30 percent of the West Bank — all of the settlements along with the strategic Jordan Valley.

But he appeared to indicate after the meeting that he would miss the July 1 target date. “I spoke about the question of sovereignty, which we are working on these days and we will continue to work on in the coming days,” Netanyahu said, meaning the groundwork ahead of the move will continue after July 1.

The US administration is pressing Israel to make a significant gesture towards the Palestinian Authority in exchange for Israel applying sovereignty over Judea and Samaria, Channel 12 News reported on Tuesday.

According to the report, US officials have proposed that Israel give land in exchange for land, in a manner that would allow Palestinian Arabs to build without restrictions or change the status of Area C (where Israel maintains security and civilian control) to that of Area B.

T. Belman. Israel should enlarge certain B areas to include the immediately adjacent land where most of the Area C Arabs live.     Thus Israel would solve the problem of citizenship for these most of the Arabs in Area C by identifying where they live as Area B.  This could be done as a tradeoff for enlarging the enclaves.