Stealth transmission, asymptomatic carriers and a lack of testing mean no one really knows how common the virus is in the U.S. 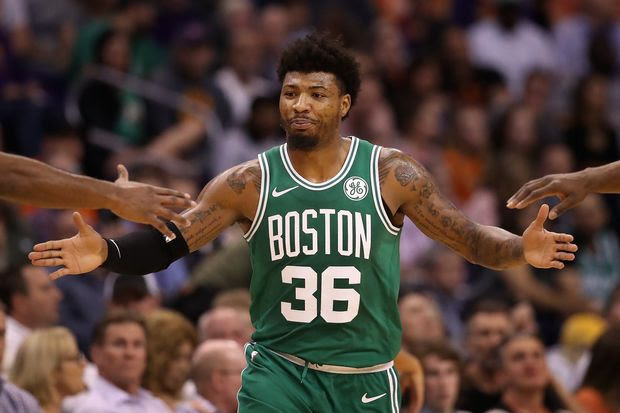 Marcus Smart, with teammates in November, had no signs of Covid-19 that would have warranted testing had he not been in the NBA. ‘I’ve had no symptoms and I feel great,’ he tweeted. Photo: Christian Petersen/Getty Images

One night last week, a 27-year-old man on a business trip in Oklahoma City felt sick, stayed home from work and was later tested for Covid-19, the disease caused by the novel coronavirus.

His positive result jump-started a series of events that led to the complete shutdown of American sports. Utah Jazz center Rudy Gobert was the first National Basketball Association player widely known to be infected, and his diagnosis has since led to the testing of eight teams and 13 more positives among players, coaches and staff members.

But those tests also revealed something curious. At least seven of them, including Brooklyn Nets star Kevin Durant, didn’t report symptoms when they were diagnosed.

This small, accidental experiment echoes what more scientific studies are finding: People with no symptoms are carrying the sometimes-deadly virus without knowing it—and might be inadvertently helping it spread.

Current U.S. testing guidelines focus largely on people who are already sick. But without more widespread testing to include people who have no symptoms, it isn’t possible to know how many infected people there really are in the U.S., experts said.

Such information could help inform decisions about where to deploy much-needed medical supplies and health-care workers, or which people to isolate—and could stem some of the economic and psychological fallout from the pandemic, infectious-disease experts said.

“It’s a more surgical or precise way to implement these isolation policies,” said Mauricio Santillana, a Harvard Medical School assistant professor who specializes in disease modeling. “At this point we don’t know the size of the iceberg we’re sitting on.”

Because of limited capabilities, U.S. public-health officials have advised against testing people who don’t show symptoms. NBA teams were heavily criticized this week for securing private tests, and President Trump has cautioned people without symptoms against getting tested. “If you don’t have symptoms,” Vice President Pence said on Saturday, “don’t do a test.”

Researchers have posted to the open-access site MedRxiv their own recent studies that used data from the outbreak that suggest people can be infectious sometimes days before they show symptoms of Covid-19. Some reports suggest some carriers never experience any.

Officials observed a similar trend among people aboard the Diamond Princess cruise in February. Of the 634 passengers and crew members on the cruise who tested positive for the virus, slightly more than half didn’t have symptoms, officials said at the time.

His group published on March 16 a peer-reviewed paper in the journal Science showing that early in China’s outbreak, 86% of infections went undetected. The paper also noted that because they were so numerous, stealth infections were the source for roughly 80% of known ones.

“The people who are symptomatic are going to announce themselves,” said Raphael Viscidi, pediatrics professor and virologist at the Johns Hopkins School of Medicine. If someone looks healthy and normal but isn’t, he said, that is “much, much harder to avoid.”

Symptoms in many Covid-19 cases are mild, so people carry on their normal activities, shedding virus as they go, experts said. That’s a big problem because they can infect people who are likely to end up in the hospital, they said. The proportion of people needing intense medical care is low, but because the virus is new and humans don’t have any significant natural immunity to it, even that small proportion translates into big numbers that are overwhelming the health-care system.

Public-health authorities leading the U.S. response have acknowledged the complicating role of asymptomatic carriers, which they say only underscores the need for social-distancing measures that have swept the country in the past week.

“Certainly there is some degree of asymptomatic transmissibility,” Anthony Fauci, the director of the National Institute of Allergy and Infectious Diseases, said at a news conference Friday. “It’s still not quite clear exactly what that is. But when people focus on that, I think they take their eye off the real ball, which is the things you do will mitigate against getting infected, no matter whether you are near someone who is asymptomatic or not.”

In the absence of the widespread testing recommended by the World Health Organization, NBA players have unintentionally become useful, potentially revealing data. The league’s outbreak is known to include Utah Jazz guard Donovan Mitchell, Boston Celtics guard Marcus Smart, two unnamed Los Angeles Lakers players and Mr. Durant—but none of them exhibited signs of disease that would have warranted testing if they weren’t NBA players.

“I’ve had no symptoms and I feel great,” Mr. Smart tweeted. “But the younger generation in our country MUST self distance. This is not a joke. Not doing so is selfish.”

Six weeks before Mr. Gobert’s positive test shook the NBA and shut down American sports, a 64-year-old woman across the world in Nianjing, China, went to the hospital and tested positive for the novel coronavirus. Three days earlier, she had developed a fever and a cough, symptoms of Covid-19, according to a case study uploaded to MedRxiv.

Her husband had no visible symptoms of the infection, but he too tested positive. In mid-January, he had traveled to China’s Hubei province, where the pandemic originated.

“It is crucial to identify and isolate asymptomatic carriers and mild patients in order to contain the outbreaks in later stages,” the authors of the study wrote.

Write to Daniela Hernandez at daniela.hernandez@wsj.com and Ben Cohen at ben.cohen@wsj.com