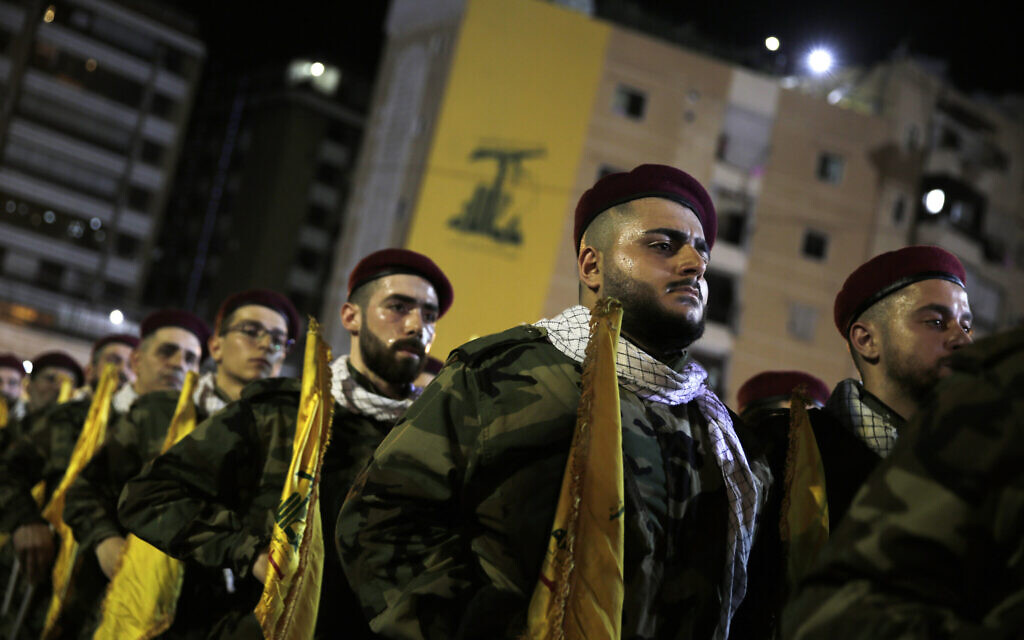 Hezbollah fighters stand in formation at a rally to mark Jerusalem Day or Al-Quds Day, in a southern suburb of Beirut, Lebanon, on May 31, 2019. (AP Photo/Hassan Ammar)

Twenty years after Israel withdrew from southern Lebanon, the enemy it fought there — the Iran-backed Hezbollah — is stronger than ever, battle-hardened from its time in Syria backing the regime, expanding its operations to the Syrian Golan border, and constantly amassing more powerful weapons for a future war with the Jewish state.

At the same time, the once-small guerrilla fighting force, now a major player in Lebanese politics, is burdened with a yoke of major responsibilities to the country and faces an economic crisis as well as the ire of a population that is being crushed by that financial collapse, caused by decades of government mismanagement and greed. The American assassination of Qassem Soleimani, the Iranian general behind much of the Islamic Republic’s expansionist activities, has also shaken Tehran and its proxies, including Hezbollah, as they seek a replacement for a nigh-irreplaceable figure.

The military this week also confirmed, in part, claims by an Israeli defense official earlier this month that Iran was beginning to pull its troops out of Syria in light of Israeli strikes against it. The army said that while Iranian forces and proxies were moving out of the country, this was not necessarily due to Israeli efforts, but rather to a more general lull in the fighting in the civil war, as well as to domestic Iranian pressure in light of the country’s growing economic crisis and the aftermath of a massive coronavirus outbreak that has killed thousands.

The upshot is that the Israeli military does not believe Hezbollah is interested in a war at this time (nor is Jerusalem), but if or, more likely, when that conflict comes, it will be catastrophic, both for Israel — which will face cross-border attacks and massive rocket barrages the likes of which the country has never seen — and for Lebanon, particularly the parts being used by Hezbollah as cover for its attacks and operations, which will be leveled by Israeli aircraft, artillery and ground forces.

In the interim, Israel has not been sitting by idly while Hezbollah grows stronger. In what the IDF calls its “war between wars,” the military has been carrying out strikes in Syria to counter Iranian efforts to transfer advanced weapons; exposing and attacking the group’s operations in the Syrian Golan Heights; and working diplomatically and, reportedly, militarily to prevent the terrorist army’s efforts to manufacture precision-guided missiles within Lebanon. 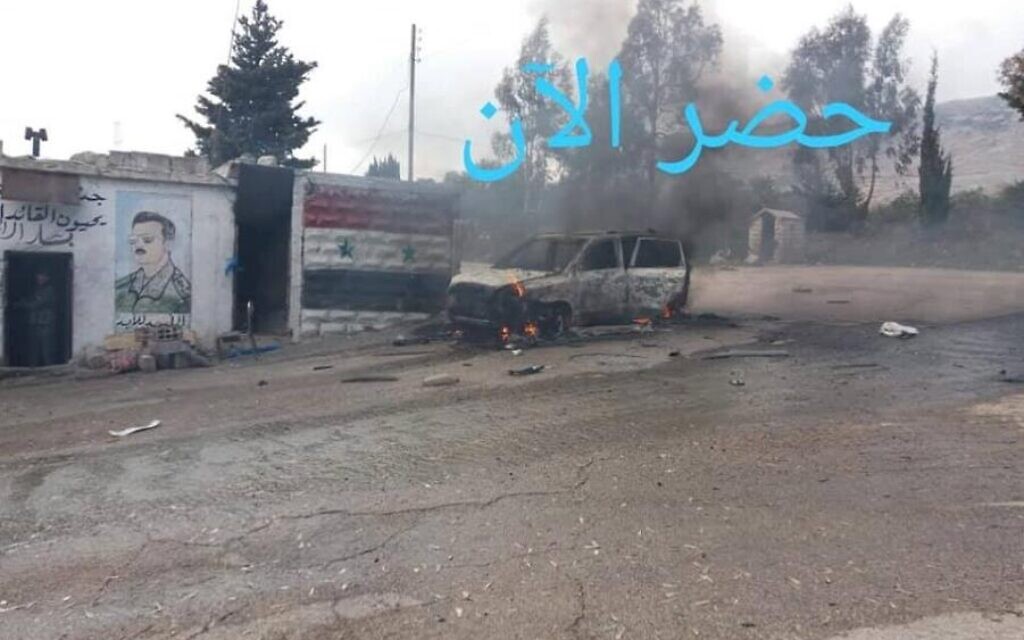 A vehicle that was reportedly struck by an Israeli missile strike in Syria, near the Golan border with Israel, on March 2, 2020. (Courtesy)

Beginning in December 2018, the IDF also exposed and destroyed six of the terror group’s attack tunnels, which Israel says Hezbollah planned to use as part of a surprise opening gambit to take over parts of Israel’s northern Galilee, killing civilians, causing carnage and mayhem, planting the group’s flag and, most importantly, filming it all to devastating real-world and propaganda effect. Though parts of Hezbollah’s plan to conquer the Galilee apparently remain in place, the military believes that by denying the group those tunnels and the ability to conduct a surprise attack through  them, it threw a major wrench in the works and at least delayed such an incursion. 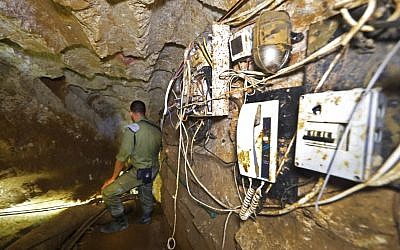 A picture taken on June 3, 2019, during a guided tour with the Israeli army shows the interior of a tunnel at the Israeli side of the border with Lebanon in northern Israel. (JACK GUEZ / AFP)

Though a direct conflict is not necessarily in the offing, the IDF believes that one could be triggered — despite this not being in either sides’ interest — by a miscalculation by one party or the other, leading to a response, a response to a response, and so on into all-out war.

This could come from an attack by Israel against Hezbollah in Syria that kills many of the group’s operatives or a particularly important one, or from an attack by Hezbollah that kills a large number of Israeli soldiers or civilians. This concern has not stopped Israel from conducting strikes in Syria, but it does demands constant, serious consideration by the IDF of the costs and benefits of any action.

On the other side, similar concerns have not kept Hezbollah from launching its own strikes against Israel, as it did last September with a missile attack that nearly killed five Israeli soldiers, but fell just short thanks more to blind luck than to proper IDF action.

Though recent months have seen a marked increase in activity along the so-called Blue Line separating Israel from Lebanon — an unofficial but internationally recognized border — the IDF generally views the frontier as calm. With two clear exceptions, the incidents along the border have not been directly Hezbollah- or terror-related: multiple attempts to smuggle drugs into Israel, migrant workers trying to enter Israel in search of jobs, and at least one foiled attempt to smuggle guns across the border, but for criminal purposes.

Though the drug-smuggling along the border, which has picked up significantly amid the Lebanese financial collapse, is not necessarily tied to Hezbollah, the group has long been known to raise funds for its terrorist activities by making and selling drugs throughout the world.

Generally, the military believes this uptick in smuggling and infiltrations along the border is due to Hezbollah turning a blind eye to what happens there, either out of indifference or logistical inability to keep things under control.

The first clear Hezbollah-linked incident occurred last month, when Israel said operatives of the group cut three holes in the border fence, throwing suspicious-looking objects through them, as an apparent retaliation for an airstrike days before on a Hezbollah vehicle in Syria that was attributed to Israel. Hezbollah never officially took responsibility for the tacit threat, which demonstrated its ability to breach the barrier and enter Israel.

The second took place on Sunday when a shepherd entered the area of Har Dov, or Shebaa Farms, with a walkie-talkie as he was apparently performing surveillance on behalf of Hezbollah. When soldiers arrived at the scene to detain him, firing into the air, the man, who was unarmed, allegedly behaved suspiciously and one of the troops opened fire at him, seriously injuring him, according to the military.

But even these irregular incidents are not considered wildly outside the norm for a border with an officially hostile country, where the IDF knows that Hezbollah is constantly monitoring its movements and activities, using ground-based operatives, an environmental organization’s sites and allegedly the Lebanese Armed Forces’ own watchtowers.

Hezbollah bulking up, branching out

Hezbollah was formed in the early 1980s with assistance from Iran to counter and harass Israel, which occupied southern Lebanon following the 1982 First Lebanon War against the Palestinian terror groups that had set up shop in the area and regularly staged deadly cross-border raids from there.

Over the years — and with ample Iranian training, funding and support — the terror group turned from a small guerrilla outfit that used guns and roadside bombs to kill Israeli troops and Lebanese collaborators, into a more powerful terrorist organization with thousands of simple rockets that it rained down on northern Israel and advanced anti-tank guided missiles that it fired at IDF positions in southern Lebanon. Now, it has emerged as an international army with more weapons and real-world fighting experience than many conventional state militaries. 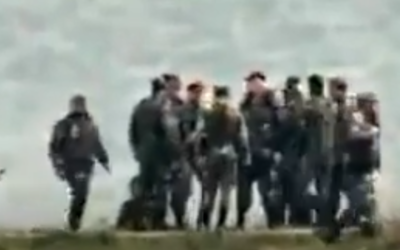 Already a serious foe, Hezbollah is working with Iran and Syria in two areas that are sources of major concern for the IDF: the establishment of a front against Israel along the Golan border, with help from Syrian dictator Bashar Assad’s military, and the acquisition of significant quantities of precision-guided missiles.

Last year, the IDF revealed the existence of Hezbollah’s so-called “Golan File,” a project to set up a front along the Syria Golan Heights, after the area came back into regime hands following Assad’s military victory there in the summer of 2018.

After initially indicating that Assad was unaware of Hezbollah’s activities there, the IDF now says his military — particularly its 1st Corps, which contains five divisions — not only knows about the terror group’s operations in southern Syria, but is actively cooperating with it.

This could be seen on March 2, when the IDF said it thwarted a sniping attack that Hezbollah operatives intended to carry out with help from the Syrian military.

Though the IDF is generally mum on the specifics of its efforts to prevent Hezbollah from establishing a front along the Golan border, the military is clear that this is its goal. 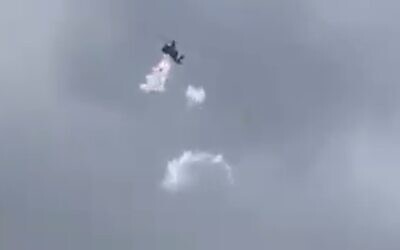 A screen capture from a video reportedly showing an Israeli helicopter attacking a vehicle in the Syrian Golan Heights on March 2, 2020. (Screen capture: Twitter)

The IDF hopes to prevent a situation in southern Syria like the one in southern Lebanon, where Hezbollah maintains a major presence, that it could use to wage a deadly war against Israel with the civilian residents of the area as a human shield.

The other major area of concern for the IDF is the group’s precision project, whose objective is either to convert Hezbollah’s existing massive stocks of rockets into advanced missiles or to manufacture such missiles.

These weapons are seen as a far greater threat than Hezbollah’s current, already troubling arsenal of roughly 130,000 rockets and missiles.

The group’s existing weapons, which have no guidance systems, are considered “statistic” rockets, as large numbers of them must be fired at a given target in order to ensure that at least one will hit it. This means that Israeli air defenses don’t need to intercept every incoming projectile as most will land harmlessly in unpopulated areas. Precision missiles, on the other hand, are far more accurate, so even if Israeli air defense batteries shoot down 99 percent of the incoming attack, the remaining one percent will almost assuredly hit a target, whether a military installation, a natural gas extraction platform or an apartment building. 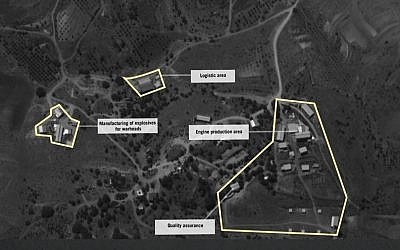 An aerial photo of what the IDF says is a site designed to produce and convert precision missiles in the Lebanese Bekaa Valley. (Israel Defense Forces)

The IDF has reportedly worked to prevent the development and production of these weapons militarily, with a drone strike in Beirut last August and ongoing airstrikes in Syria. But Israel has also worked diplomatically, sending clear messages to the Lebanese government — including in recent weeks — that it is a “red line” that Israel will not accept and will take action to prevent, hoping that this will force Beirut to rein in Hezbollah’s efforts. Israel has also identified the names of people it says are involved in the project, as well as sites it says are used to develop such weapons.

The IDF is gearing up too

In addition to trying to weaken Hezbollah, the IDF is also working to make itself stronger for the possibility of a future war with the terror group, with major exercises simulating such a conflict and a multi-year plan dubbed Momentum that is meant to specifically prepare the military for the kind of fighting it expects to face. 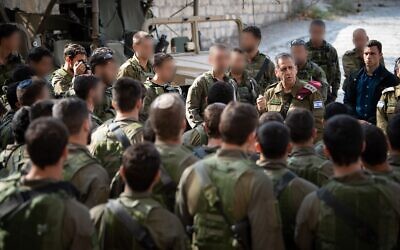 The military’s overall strategy is to take advantage of the areas where it has clear superiority over Hezbollah — namely intelligence and air power — and use them to their fullest to bring a war to a quick, speedy end, with the understanding that the more time a conflict drags on, the more rockets will be fired into Israel.

To ensure that the soldiers who would take part in such a war are up to the task, the IDF Northern Command has also been giving a preparedness examination to each of its conscripted units — though not yet to its reserve ones — a process that it hopes to finish within the year.

However, some aspects of the military’s Momentum Plan, which calls for major acquisitions of new equipment and technology, may be put on hold in light of the country’s developing economic crisis following the coronavirus pandemic.