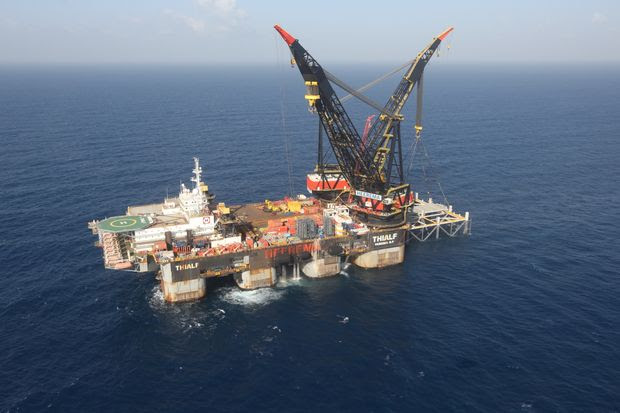 The Leviathan natural-gas field in the Mediterranean Sea off the coast of Israel. Large finds in the Eastern Mediterranean have turned the region into a global energy source. Photo: Marc Israel Sellem/Press Pool

The contest over newfound gas riches in the Eastern Mediterranean has triggered a slew of rival maritime claims, pushing the region’s main powers—all of them America’s partners or allies—toward open confrontation.

On one side is a budding alliance of Greece, Israel, Cyprus and Egypt that benefits from the recent finds. On another is the Eastern Mediterranean’s biggest economy, Turkey, which is increasingly flexing its military muscles as it seeks to break its regional isolation.

Turkish and Greek navy flotillas shadowed each other in contested waters after Turkey announced on July 21 that one of its two new seismic exploration ships will probe for oil and gas off the Greek island of Rhodes. Intense diplomatic efforts by Germany persuaded Turkey to temporarily halt the plan, which could have sparked an armed clash.

But, so far, it is just a pause—and the battle for supremacy over the Eastern Mediterranean and its lucrative seabed resources is almost certain to keep escalating, posing a significant new challenge in an already volatile part of the world.

“We see a tendency by Turkey to follow gunboat diplomacy and a militarization of its foreign policy,” Cyprus Foreign Minister Nikos Christodoulides said in an interview. “It is an attempt by Turkey to control the region. We want all the parties in the region to be involved in regional cooperation. But it’s Turkey through its behavior that is excluding itself.”

Turkish officials retort that it is Greece’s and Cyprus’s “maximalist” claims on Mediterranean waters that provoked the standoff. “If you look at the map, you see that we have the longest coast in the Eastern Mediterranean, and we have a huge continental shelf area,” a senior Turkish official said. “Real cooperation can only be made with the involvement of Turkey.” 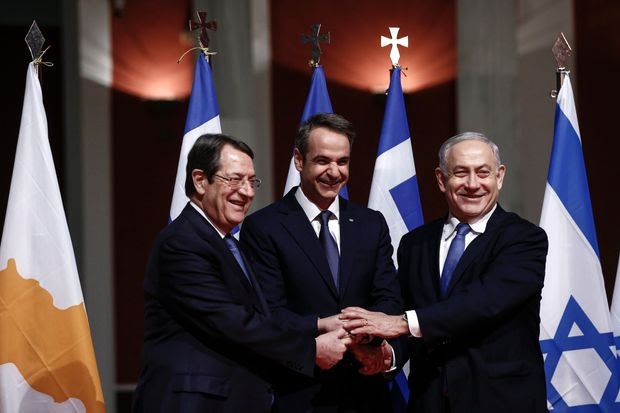 During the past decade, large offshore natural-gas finds in Israeli, Cypriot and Egyptian exclusive economic zones have turned the region into a global energy source. Just last month, Chevron Corp. said it would pay $5 billion for Noble Energy, a U.S. company whose major assets include stakes in Israel’s Leviathan and Tamar gas fields and in the Aphrodite field off Cyprus. Altogether, East Mediterranean fields discovered since 2009 hold 70 trillion cubic feet of gas, equivalent to nearly 50 years of consumption by France, with a similar amount likely to be found in the near future, according to Wood Mackenzie consulting firm.

The EastMed pipeline planned by Israel, Cyprus, Greece and Italy would carry this gas to European consumers—except that Turkey’s recent maritime claims cross its route. Turkish President Recep Tayyip Erdogan has already said that EastMed won’t go ahead without his assent.

Turkey’s expansionist stance in the Eastern Mediterranean can be traced to the so-called Mavi Vatan, or Blue Homeland, program drafted by nationalist Rear Adm. Cem Gurdeniz in 2006. Mr. Erdogan, whose government once espoused the policy of “zero problems with neighbors,” hewed closer to this worldview after allying with hard-line nationalists in the aftermath of the failed 2016 coup attempt. 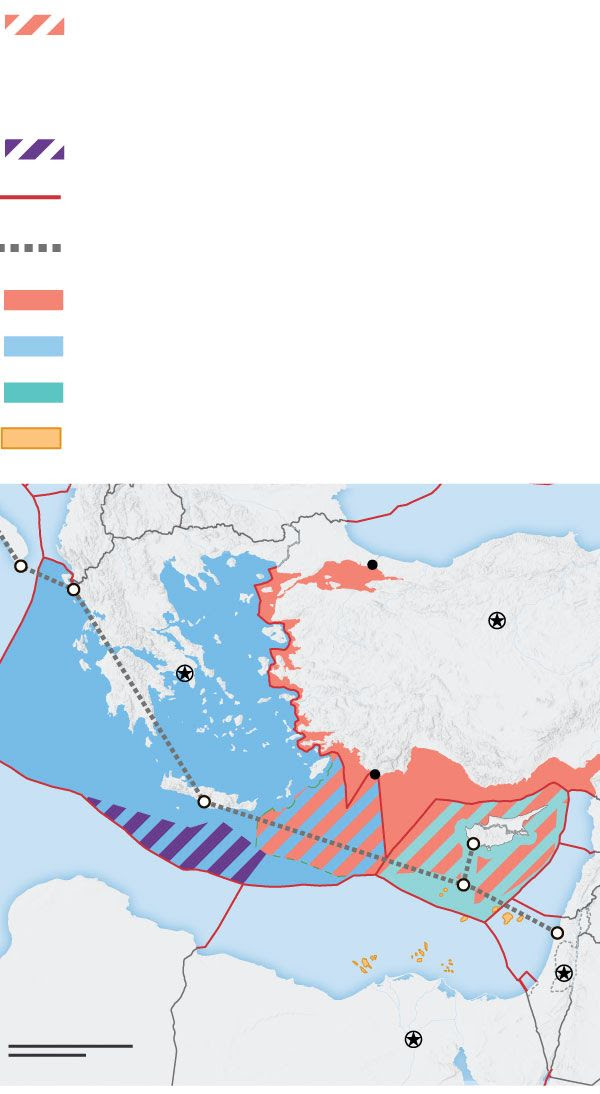 In 2018, authorities of Turkish-occupied northern Cyprus claimed the right to drill in much of the Cyprus EEZ, including off the southern part of the island, and the Turkish Navy chased away an Italian drill ship authorized by the Cypriot government. Then, last November, Turkey stunned its neighbors by signing a maritime delimitation deal with Libya. The agreement, endorsed by the Turkish-propped government in Tripoli that is fighting a bloody civil war, hacked away much of Greece’s claimed maritime areas.

In drafting their maps, Turkish officials argue that Greek islands shouldn’t be entitled to a large EEZ and refuse to take into account the Greek island of Kastellorizo, population 500 (and the setting of the movie “Mediterraneo”) that is located a bit over a mile off the Turkish coast.

“Who might expect Turkey to give up 50,000 square kilometers because of this tiny island? It’s our future generations’ share, it’s impossible. This is a zero-sum game,” said Adm. Gurdeniz, who now runs a maritime think tank at Koc University in Istanbul. “It’s worth it to face the whole world, not just one, two or three countries, because we are talking about the blue homeland, the extension of our homeland.”

The U.S. and the European Union haven’t recognized Turkey’s claims, with the State Department calling the Libya delimitation agreement “unhelpful and provocative.” In a sign of growing frustration with Turkey, the U.S. also said in July that it would start joint military training with Cyprus for the first time to promote stability in the region. Congress in December ended the arms embargo on Cyprus that was imposed in deference to Turkey in 1987. 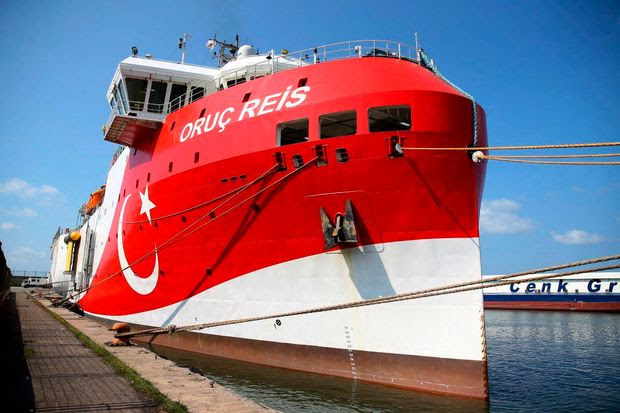 The Turkish seismic ship Oruc Reis in an undated photograph in Antalya, Turkey. The ship was supposed to probe off Rhodes, Greece, though it remains in port. Photo: Turkish Ministry of Energy and Natural Resources/Associated Press

While Cyprus, divided since 1974 into a mostly ethnic-Greek area administered by the internationally recognized Republic of Cyprus and a Turkish-occupied north, isn’t a member of the North Atlantic Treaty Organization, Turkey and Greece both belong to the Western alliance even as they edge close to a military confrontation.

“Turkey’s definition of its own maritime zone defies the international convention on the law of the sea, as well as geography and common sense, violates Greek sovereign rights and challenges Greek interests in a manner no Greek government can accept,” said Thanos Dokos, Greece’s deputy national-security adviser. “Therefore, the possibility of military conflict is real, and Greece is fully prepared.”

A key driver of Turkey’s behavior is that, with the exception of the Tripoli government that controls half of war-torn Libya, Ankara—also involved in military action in Syria and Iraq—has virtually no allies in the region. The first regional organization to cooperate on energy development, the East Mediterranean Gas Forum that was established last year, unites Egypt, Israel, Cyprus, Greece, Jordan, the Palestinian Authority and Italy. France, a vocal opponent of Turkey’s aims in the region and whose Navy frigate had a standoff with three Turkish vessels off Libya in June, has also applied for membership.

“While there are initiatives attempting to exclude Turkey from the energy equation in the Eastern Mediterranean, nobody can expect Turkey to be doing nothing. That’s why Turkey launched the offshore program and we are determined to continue,” said a senior Turkish official.

How might the U.S. ease growing conflicts in the Eastern Mediterranean? Join the conversation below.

Turkey is right to challenge the Cypriot government’s gas-exploration concessions because the island’s ethnic Turkish community is entitled to an equal share of resources, he added. Though Oruc Reis, the Turkish seismic ship that was supposed to probe off Rhodes, remains in port, its sister vessel has already begun a new round of exploration in disputed waters southeast of Cyprus.

Turkey has touted a competing plan to the EastMed pipeline. “Turkey proposes that if there is a pipeline to bring Israeli gas to Europe, as an alternative perhaps to Russian gas, the easiest and most economic transit way goes through Turkey,” said Nursin Atesoglu Guney, president of the Center of Mediterranean Security think tank and an adviser to Mr. Erdogan.

In a pushback, Greece and Egypt (which is backing an anti-Turkish faction in the Libyan civil war) are completing a maritime delimitation agreement of their own that would overlap with Turkish and Libyan claims. Israel, whose once friendly relations with Turkey have deteriorated under Mr. Erdogan, has long insisted it doesn’t need Ankara’s accord to lay the EastMed pipeline.

“Once this project moves ahead, I consider that nobody will try to sabotage it. This is international law,” Israel’s Energy Minister Yuval Steinitz said in an interview. “Regardless of the boundaries of exclusive economic waters, any ship can sail them, any airplane can fly above them, and any pipeline can be constructed through the economic waters of any country.”

While Israel is interested in deepening its existing alliance with Greece and Cyprus, that doesn’t mean it would get dragged into a military clash with Turkey, of course. “I don’t think Israel ever got involved directly in an armed conflict between two other countries,” Mr. Steinitz added.

In any case, the global economic slowdown—and the decline in energy prices—have made the EastMed pipeline project, already technically challenging, even more complicated. “The pipeline is totally theoretical for the time being,” said Angelos Syrigos, a lawmaker from Greece’s ruling party. “What Turkey is afraid of is not the pipeline, what it is afraid of is the cooperation between Greece, Cyprus and Israel.”