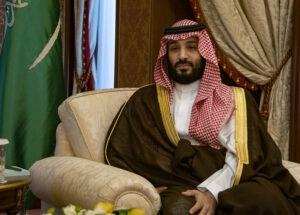 EXECUTIVE SUMMARY: The recent revelations about Sa’ad Jabri, an Islamist and corrupt former Saudi intelligence officer, highlight the discrepancy between Western institutions’ criticism of Saudi Arabia in the name of human rights and their support for the former officials most responsible for human rights abuses and security threats associated with the Kingdom. A tangled web of relations between pro-Brotherhood Muhammad bin Nayef regime apparatchiks, pro-Qatar members of US law enforcement (like Ali Soufan), and ideologically sympathetic intermediaries (like Jamal Khashoggi) are threatened by Muhammad bin Salman’s reforms.

When Sa’ad Jabri, the fugitive former head of intelligence under former Saudi Crown Prince Muhammad bin Nayef, launched a media campaign accusing current Saudi Crown Prince Muhammad bin Salman of abducting his children, it took the kingdom over two months to react and release information to the Wall Street Journal. This calmed the media furor, but Jabri is just one actor in a never-ending campaign accusing the reformist government of Saudi Arabia of being no better, if not worse, than its predecessors in terms of human rights abuses, oppression of critics, and manipulation of public opinion in the West.

Jabri has since doubled down and filed a lawsuit in Canadian courts alleging that the Crown Prince sent a kill squad to assassinate him. Thus far, there appears to be no evidence to this claim, but the pattern of organizations opposed to the Crown Prince shows their willingness to expend significant resources on attacking his character and keeping scandals in the news, even if the claims are frivolous and likely to be defeated.

The unstoppable flow of election, pandemic, and riot-related developments has consumed much of the US media’s attention. However, The New York Times was not deterred from publishing a series of articles accusing Muhammad bin Salman supporters on social media of defaming and character-assassinating the former Crown Prince. Why is the Times so interested in Muhammad bin Nayef, who has been out of power for the last three years?

Jabri is just one member of a wide cast of characters in an intricate web of relations concerning reforms in Saudi Arabia. On the one hand, there is a push from human rights NGOs, Muhammad bin Nayef supporters, the media, and lobbyists to portray Vision2030 as a fraud or failure for not going far or fast enough. On the other, there is a concerted effort from the same groups (and elements of Western intelligence) to reverse the reforms and restore the former status quo. Jabri’s story helps shed light on the vested interests some Westerners have in restoring corrupt Islamists to power.

While Jabri never presented any evidence that his adult children were abducted, three points should be kept in mind: 1) his family appears to have benefited from his embezzlement and may know details that are relevant to the Saudi government’s investigation; 2) their ideological indoctrination and their own activities may also make them persons of interest; and 3) Jabri, as an intelligence professional, has been trained to lie and to exploit the gullible.

According to the Western hagiographic view of Jabri, he is a courageous anti-terror warrior responsible for preventing an al-Qaeda bomb plot targeting the West. He is considered a key interlocutor with Western intelligence agencies, including MI6 and the CIA, and a “gatekeeper” to Muhammad bin Nayef, whom these intelligence agencies as well as the media credit with cracking down on the al-Qaeda insurgency in the mid-2000s. A simple search, however, tells a different story.

Al-Qaeda and other Islamists attempted attacks against Saudi Arabia through mid-2017, a couple of months after Muhammad bin Salman was appointed Crown Prince. The Wall Street Journal revealed that Jabri embezzled over $11 billion in government funding for personal and family use, was identified in the Muhammad bin Salman-led corruption probe of 2017, and fled to Canada before being apprehended in connection with that massive theft. A Twitter account that is followed by members of the Saudi royal family and is known to be a source of official leaks provides additional details.

In 2013, the investigation reveals, Jabri received a pricey private property in Turkey as a gift from President Erdo?an. He also purchased luxury properties in two different cities, presumably with the purloined rials. Jabri was not just corrupt; he enjoyed a close personal relationship with Turkey’s Islamist president and shared in his ideology. He also retained close contacts with the head of Turkey’s intelligence service, MIT, who allegedly assisted in his escape to Canada, where much of the Saudi “opposition”—i.e., Qatar-backed critics of Muhammad bin Salman—reside. How could Muhammad bin Nayef not have known about these developments?

Jabri’s extradition and interrogation could reveal Bin Nayef’s involvement or complicity with the Islamists surrounding him. Fearing pressure, Jabri accused Muhammad bin Salman of abusive practices in an effort to sway public sympathy and the Canadian government to view him as a political dissident deserving of protection, rather than a corrupt official on the lam.

Muhammad bin Nayef and King Salman’s brother Ahmed bin Abdulaziz were both taken into custody in March in connection with plotting elaborate political schemes that involved lobbying government bodies to destroy Muhammad bin Salman’s reputation and get him replaced by the king. That was followed by another corruption probe, which resulted in the arrests of hundreds of officials, particularly in the Ministry of Interior. But Jabri holds the key to whether Muhammad bin Nayef and many of the top officials could be officially charged.

Since his ascent, Muhammad bin Salman has tried to make peace with Muhammad bin Nayef and his followers, many of whom had lost positions, access, and power as a result of the aggressive implementation of Vision2030 and the philosophical reorientation of the government. However, the bizarre circumstances surrounding the Jamal Khashoggi killing in Istanbul’s Saudi Consulate, together with other security and PR disasters, point to more than just the growing pains of his young team.

Jabri was best positioned to influence the course of events sub rosa inside the country and, as a former senior intelligence figure, would be the logical link to the “deep state” behind the unexplainable series of disasters that have struck Saudi Arabia over the past three years. Jabri not only has evidence about Bin Nayef’s (and his supporters’ and backers’) role in these scandals and plots, but could potentially disclose the details of contacts between Qatar, the Saudi opposition abroad, Western intelligence agencies, and the kingdom’s Islamists, who share al-Qaeda’s ideological roots and once provided ample funding.

Jabri’s tenure destroys the myth of “moderate” Islamism. Al-Qaeda may have plotted to kill his boss on multiple occasions due to intra-factional disagreements, but there may be a good reason why these attempts always failed. Why would they ever want to cut off the hand that fed them?

As for the sympathetic Westerners, consider Ali Soufan, an acclaimed intelligence veteran, who was one of the interlocutors with Jabri on counterterrorism efforts. Soufan happens to now be training Qatar’s forces and has accused a Saudi investigative journalist of masterminding harassment campaigns online against him. However, those who have come out in support of Soufan in the media, like Bruce Riedel, are themselves a part of institutions funded by Doha.

Saudi journalists and researchers increasingly see the death of Jamal Khashoggi under mysterious circumstances that were never fully resolved as a set-up by Islamist plotters to get rid of an inconvenient gadfly who knew too much and was about to get arrested, while at the same time framing the naive and inexperienced Crown Prince, whose team was ill-prepared to counter Qatar’s information warfare.

Following Khashoggi’s death, the media and Western intelligence agencies erupted in a series of leaks from anonymous officers who claimed that the CIA held Muhammad bin Salman personally responsible for Khashoggi’s death (the CIA’s director never made that claim). These leaks revealed sensitive details during the ongoing investigation that, whether true or fabricated, would have undermined US national security interests. Critics of the Islamists believe it is the parties to the relationship between Jabri, Soufan, and similarly situated officials on both sides of the ocean who had forged ties and made mutually beneficial and career-enhancing arrangements under Muhammad bin Nayef’s rule who were responsible for these leaks.

Finally, it is important to note why the Khashoggi scandal could matter to these institutions. Khashoggi was a former Saudi intelligence officer and government spokesman who was active during the counterterrorism campaign and who was sent to make a deal with Osama bin Laden to protect Saudi Arabia from attacks.

Khashoggi, by all accounts, befriended bin Laden, who was not seriously targeted by the Saudis despite a continuous stream of attacks against the country. Khashoggi’s ideology, openly Muslim Brotherhood, had a great deal in common with bin Laden’s world view. He was opposed to the kingdom’s crackdown on Islamist hate preachers and to Muhammad bin Salman’s policies, which would put the country on course toward potential defense and business dealings with Israel (through regional cooperation over the NEOM project, among others). Many of these developments required a new approach and a new government team to oversee them, which would mean loss of power for the Islamists.

As unacceptable as the more open, anti-extremist view of Islam proposed by the Crown Prince and his supporters was to this group of officials, they may be equally or even more motivated by the specter of personal ruin. Similarly, those in the media and Western intelligence who were on the dole and about to have their access and funding disrupted had a vested interest in lashing out. And they did, coming together to defend their positions, which inevitably means protecting people like Jabri and using powerful Western lobbyists to undermine the Saudi Crown Prince as he attempts to uncover the extent of the rot inside his own government.

Irina Tsukerman is a human rights and national security attorney based in New York. She has written extensively on geopolitics and US foreign policy for a variety of American, Israeli, and other international publications