Whether Trump wins or loses in November, the radicalization of white progressives at the heart of the mayhem represents the greatest threat to the communal future of American Jewry, to relations between the American Jewish community and the rest of the Jewish world, and to US-Israel relations.

By Caroline B. Glick, ISRAEL HAYOM 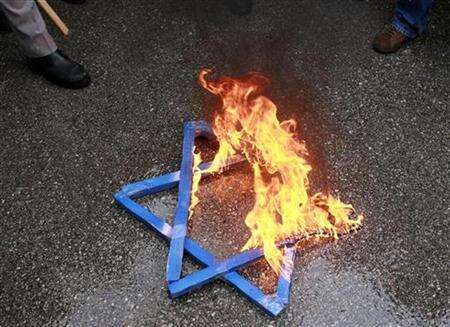 BDS campaigns on US campuses are characterized by bigotry and discrimination directed against Jewish students | Illustration: Reuters

Scattered among the thousands of cellphone videos depicting looting and destruction in the streets of America’s greatest cities are clips of a different sort. In these short videos, we see throngs of white people on their knees, bowing before black people and asking for forgiveness for their “white privilege” and the “structural racism” in the deplorable, irredeemable United States of America.

Earlier this week, presumptive Democratic presidential nominee former vice president Joe Biden symbolically embraced these genuflecting denunciations of “white privilege” as the official position of the Democratic Party. Biden had himself photographed on bended knee with a group of African Americans standing behind him during a visit to a church in Wilmington, Delaware.

These videos point to a socio-political phenomenon that sparked the riots throughout the country following George Floyd’s brutal death at the hands of a Minneapolis police officer. They also make clear the reason that the liberal media in the US continues to back the protests despite the fact that from the outset they have involved wide-scale violence, destruction and looting.

Contrary to the narrative being pushed by the media and America’s elites, the riots are not a consequence of increased police brutality towards African Americans. As Heather McDonald documented this week in the Wall Street Journal, over the past several years, police violence against black people has decreased significantly.

The violence we are seeing is a result of the steep radicalization of progressive white Americans. Biden gave voice to this radicalization last summer when, during a campaign appearance in Iowa he said, “We choose truth over facts.”

Goldberg argues that the massive increase in internet usage by white progressives over the past decade is responsible for the radicalization. Online platforms have created an information bubble that has created a warped presentation of reality to those inside the bubble. In this warped reality, race relations are far worse than they are in reality. Hence, those who inhabit this bubble prefer “truth” as presented in the bubble to facts.

Goldberg is undoubtedly correct that the more time people spend inside their internet bubble the more removed they become from objective reality. But the internet isn’t the only source of the radicalization. The Obama presidency was also a factor.

When Barack Obama won the presidential race in 2008, many Americans believed his victory was proof the United States had overcome its racist past. Obama however, did not support this view. Throughout his tenure in office, Obama used the power of his position to resonate and legitimize positions on race that until then had been relegated to the leftist margins of American politics.

Obama cultivated the view that far from being a post-racial society, America is inherently racist and that American racism is structural – that is, it was baked in and impossible to overcome. In so doing, Obama gave credence to the false claim at the heart of the riots: that black Americans are under continuous, existential threat from the state as a whole and from law enforcement bodies first and foremost. Calls by Hollywood celebrities and Obama administration alumni to defund the police take this view to its logical endpoint. 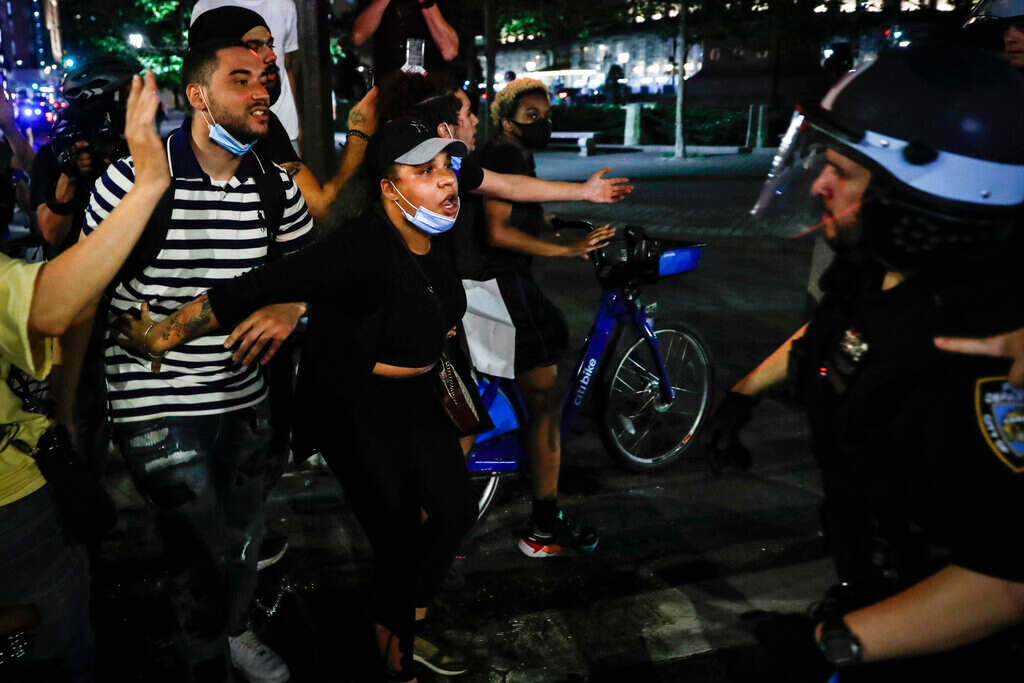 The radicalization of white progressive politics has been given its most dramatic expression in the refusal of progressive mayors and governors to act forthrightly to end the violence in their streets. Instead, we had the likes of New York Mayor Bill DeBlasio (whose daughter was arrested for participating in the mayhem), stand with those burning his city.

In a letter to police sergeants in the New York Police Department, Ed Mullen, President of the Sergeants Benevolent Association gave expression to the distress of New York police officers. “I know we are losing our city,” Mullen wrote.

“We have no leadership, no direction, and no plan. I know that you are being held back and used as pawns,” he continued.

He then asked the sergeants to hold the line.

“Remember,” he added, “you work for a higher authority.”

But the Jews’ progressive desire to work on behalf of those demonstrating for African Americans places their political identity on a collision course with their Jewish identity. Black Lives Matter, the radical group leading the demonstrations, is an anti-Semitic organization. BLM was formed in 2014 as a merger of activists from the anti-Semitic Nation of Islam, the anti-Semitic Black Panthers and Dream Catchers. In 2016, BLM published a platform that has since been removed from its website. The platform accused Israel of committing “genocide” and referred to the Jewish state as an “apartheid” state. The platform accused Israel and its supporters of pushing the US into wars in the Middle East. The platform also officially joined BLM with the anti-Semitic BDS campaign to boycott, divest and sanction Israel. BDS campaign leader Omar Barghouti acknowledged this week that the goal of the BDS campaign is to destroy Israel. BDS campaigns on US campuses are characterized by bigotry and discrimination directed against Jewish students. 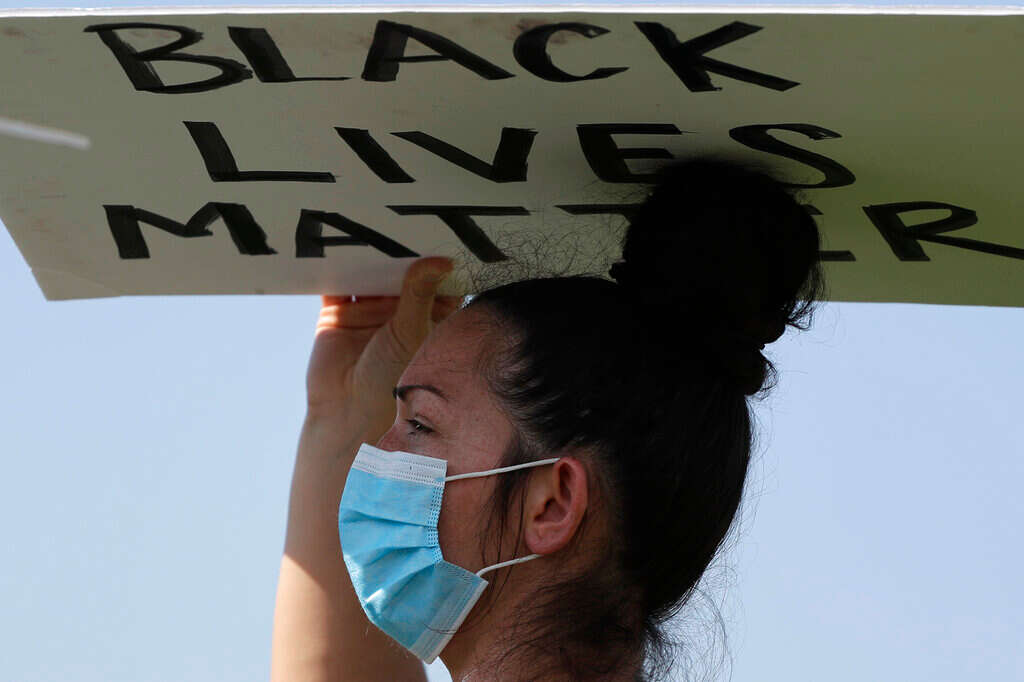 BLM’s platform’s publication was greeted with wall-to-wall condemnations by Jewish organizations from across the political spectrum. But today, Jewish progressive are hard-pressed to turn their backs on the group, despite its anti-Semitism. As white progressives, they believe they must fight America’s “structural racism” even at the cost of empowering social forces that reject their civil rights as Jews. As Jews, they feel that their rights should be protected. One progressive Jew tried to square the circle writing in the Los Angeles Jewish Journal, “Today Jews need to support Black Lives Matter; tomorrow we can talk about Israel.”

Last week Tablet published a 20,000-word essay titled “Bend the Jews,” on Bend the Arc, the flagship organization spawned by those efforts.

Bend the Arc first rose to the attention of the general public in 2018 in the wake of the massacre of worshippers at the Tree of Life Synagogue in Pittsburgh. The organization quickly put out a statement blaming President Donald Trump for the massacre. When Trump came to the congregations to pay his respects, Bend the Arc organized demonstrations against him.

Bend the Arc may not have members. But it has an annual budget of tens of millions of dollars. $28 million of its budget comes from three non-Jewish foundations that have no other foothold in Jewish organizational life. On the other hand, one of the funders, the Rockefeller Foundation, is well known for its generous support for radical anti-Israel and BDS groups.

To achieve its goal of reshaping the world views of American Jews, among other things, Bend the Arc trains Conservative, Reform and Reconstructionist rabbinical students. It also pays the salaries of associate rabbis in various communities. With many synagogues long steeped in financial crisis due to dwindling membership, Bend the Arc’s ability to pay rabbis makes its involvement with synagogue hiring an attractive option for many communities. This is doubly true for synagogues whose members are progressive.

What is it conditioned on? On Jews not being opposed by blacks or other minorities that are considered by white progressives to be less privileged than Jews are.

On the burning streets of America today, leftist Jew-hatred is on clear display. Although New York Mayor Bill DeBlasio has prevented New York police from taking firm action against looters and arsonists, he did instruct them to use all necessary force to prevent ultra-Orthodox Jewish children from going to school. Earlier this week, police in Brooklyn chased a group of Hassidic children and their mothers off a playground in Williamsburg.

Even worse, synagogues have been vandalized in New York and Los Angeles. According to Yeshiva World News, 75% of Jewish-owned stores in an Orthodox enclave of Beverly Hills were looted last weekend. Graffiti in Los Angeles made clear that the businesses and neighborhoods were targeted deliberately because they are Jewish.

Democrats believe the riots will wreck President Trump’s reelection hopes. Polls this week indicate that at least in the short term, the unrest is hurting Trump’s chances of being reelected. Then again, it’s possible the chaos in the streets will strengthen public support for President Trump, who voters may view as the last bulwark separating them from national destruction.

Whether Trump wins or loses in November, the radicalization of white progressives at the heart of the mayhem represents the greatest short and long-term threat to social cohesion in America. It also represents the greatest threat to the communal future of American Jewry, to relations between the American Jewish community and the rest of the Jewish world, and to US-Israel relations.