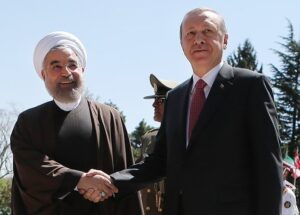 EXECUTIVE SUMMARY: In an extraordinary breakthrough, the United Arab Emirates and Israel have agreed to establish open diplomatic relations after years of secret contacts. Other than the Palestinians, Turkey and Iran are the biggest losers from this development.

The historic normalization agreement between Israel and the United Arab Emirates (UAE) that was revealed by President Donald Trump on August 13, 2020 is a revolutionary event in modern Middle Eastern history. While it could potentially save the increasingly endangered governments of PM Benjamin Netanyahu and President Trump, the deal has two more significant elements. First, it heralds the end of the “Palestinian cause” and its stranglehold on the prospects for Middle East peace; and second, it is probably the beginning of the end for Turkey’s and Iran’s imperial projects in the region.

With the most powerful regional military on its side, the UAE will be increasingly able to put pressure on the Iran-backed Houthi movement in Yemen, and will be able to threaten Turkey’s designs for Libya. This is why Iran and Turkey were nearly alone in the Muslim world—indeed, in the whole international community—in their condemnation of the peace deal.

For years, the UN-EU “peace industry” ignored regional developments and continued to peddle the lie that only the creation of a Palestinian state on the 1967 lines could bring about stability in the Middle East and acceptance of Israel’s right to exist as a Jewish state. That is no more. The UAE joins Egypt and Jordan among the Arab countries that recognize Israel, and it did so without reference to the Palestinians. Other countries, notably Bahrain, Oman, Morocco, and Sudan, are said to be considering signing similar agreements in the coming weeks.

In light of the counterterror fight against groups like ISIS and al-Qaeda, as well as the COVID-19 pandemic and subsequent economic crisis, it makes sense that Arab states such as the UAE would wish to normalize relations with the Jewish state for their own benefit and for the good of the region. However, it is likely that the main reason Abu Dhabi and Jerusalem made amends was to bring an end to the threats posed to both countries and to the rest of the Arab world by Turkey and Iran.

Yemen, Libya, Iraq, Syria, and Lebanon have either been destroyed or reduced to the status of colonies of their former Persian and Ottoman masters. Qatar has cozied up to both countries at the expense of its Arab neighbors. The Palestinians have made the mistake of repeatedly condemning secret ties between their Arab brethren and their Jewish enemies while cozying up to Tehran and Ankara. In reality, it was the Palestinians who abandoned their Arab brethren for foreign usurpers. The powerful Arab states have finally had enough, and are advancing their own national security interests no matter what the Palestinians may want.

In Yemen, the Islamic Republic has backed the Houthi rebellion, which regularly threatens Jews and Israel. Just as Hezbollah and Hamas shoot rockets at Israeli cities, the Houthis fire rockets at Emirati and Saudi targets. Houthis regularly threaten to fire missiles at Dubai and Abu Dhabi—important global cities for trade and economics—just as Hezbollah and Hamas threaten to raze Haifa and Tel Aviv in the next war.

It is only natural that Israel and moderate Arab regimes see the commonality in the threat they face. After all, Qatar and Iran both provide assistance to Hezbollah, and they—along with Turkey—prop up the Hamas regime in the Gaza Strip. In Libya, Turkey and its Syrian mercenaries have intervened militarily to destroy Khalifa Haftar’s secular rebellion, which allegedly has contacts with Jerusalem and has long sought the help of Gulf Arab states with the goal of stemming the Muslim Brotherhood.

Egypt has threatened to invade Libya to quell the Turkish-backed insurrection, but it is busy with a dispute with Ethiopia over the Nile and an insurgency in Sinai as it battles an economic crisis. UN backing for the Turkish side in Libya, as well as the fact that Egypt relies on Emirati and Israeli help in Sinai, makes it unlikely that Cairo can achieve a victory on its own in Libya without paying a heavy price. This is why the Emirati-Israeli agreement is so crucial to the future of Israeli-Arab relations in the region.

Iran and its Hezbollah proxy in Lebanon have experienced major setbacks over the past few years. Hezbollah has received less cash from Iran since 2018, when the US sent Tehran into an economic crisis by reimposing sanctions after leaving the nuclear deal. Lebanon’s own economic crisis—compounded by the pandemic and internal riots that are often anti-Iran and anti-Hezbollah—has only grown worse, particularly as Hezbollah is suspected of being partially responsible for the Beirut Port explosion earlier this month.

Iran’s mishandling of the pandemic and internal unrest, along with its and Hezbollah’s battlefield losses in Syria, have weakened its imperialist drive throughout the region. Israel has reached interim agreements with Gaza while engaging in limited military activity against the Strip that keeps the ruling groups weak. Iran’s loss of its chief military strategists in Iraq this past January further undermined its designs on the region, as have the growing global recognition of Hezbollah as a terror group and the sanctions that accompany that recognition. Iraqi protests against the Iranian regime and its proxies have also become more commonplace.

For now, Yemen remains the Islamic Republic’s strongest hope to continue its imperialist crusade. But the UAE-Israel peace deal means that Israeli military experience, technology, and intelligence will likely make their way to Abu Dhabi to help quell and ultimately crush the Houthi rebellion. This would lead to the isolation and humiliation of the regime in Tehran while bolstering the new nationalist and secular system emerging in Riyadh, Abu Dhabi, and Manama.

Turkey, too, is worried about the rapprochement between the Israelis and the Arabs—particularly the UAE. Israel has been accused of sending intelligence and some military aid to Khalifa Haftar. With a more open relationship with Abu Dhabi, Jerusalem is likely to increase such aid to the anti-Muslim Brotherhood coalition in Libya, which can scupper Ankara’s designs there.

Turkey has been giving shelter to Hamas terrorists on its soil while trying to increase Islamist sentiment about Jerusalem. Its regular incitement against Israel and territorial encroachment on Cyprus and Greece has turned Jerusalem away from its traditional Turkish partner and closer to southeastern Europe and Arab countries. Israel will take any action necessary to preserve its economic interests in the Mediterranean, which Turkey’s maritime deal with the Government of National Accord in Libya seeks to destroy. France and Egypt have also entered the Mediterranean fray on the side of Israel, Cyprus, and Greece.

These developments had already isolated Turkey in the region. If more direct military assistance reaches Haftar from Jerusalem, Ankara will find it extremely difficult to impose its will on Libya. Qatar, too, will probably remain relatively isolated due to its close ties to Hezbollah, Iran, and Turkey. The UAE’s own investment in the Israel-Egypt-Cyprus-Greece pipeline further illustrates the strategic reorientation of the region and Ankara’s isolation.

Regardless of what the far left, the Palestinians, and the “peace industry” may say, the Israeli-Emirati peace deal has fundamentally reshaped the Middle East and increased the chances of long-term regional peace, as well as the acceptance and recognition of the Jewish state. Jerusalem and Abu Dhabi will work together to fight the pandemic while further sidelining Iran, Qatar, and Turkey.

The Israel-UAE rapprochement will likely spur other regional states to recognize Israel as well. Hopefully the Palestinians will grasp that their century-long rejectionism has failed and adopt a real desire for peace with their Jewish neighbor.

Dmitri Shufutinsky is a graduate of Arcadia University’s Masters program in International Peace & Conflict Resolution. He currently lives as a Lone Soldier in Kibbutz Erez, Israel, serving in the Givati Brigade under the Garin Tzabar program.