T. Belman. Israel has not agreed to table the extension of sovereignty so they’re not committed to it.  So UAE have to rely on Trump’s assurance only. Israel is not even bound to wait for Trump’s approval.  She can extend sovereignty before the end of the year without Trump’s approval.

Besides, it is implied that “all things being equal” preceded Trump’s assurance that he  would not recognize Israel’s annexation etc.

Notice he didn’t assure them that Israel won’t extend sovereignty for 4 years, only that he wouldn’t recognize it if she did.  I am not all all concerned about Trump’s assurance.  Things can change.

UAE prioritized receiving assurances from Washington, sources say, given that Netanyahu has made clear he won’t advance controversial move without US support 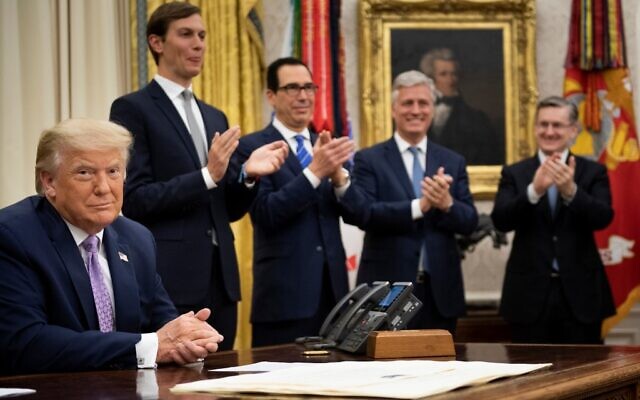 (L-R, rear) US senior presidential advisor Jared Kushner, US Secretary of the Treasury Steven Mnuchin and US National Security Advisor Robert O’Brien clap for US President Donald Trump after he announced an agreement between the United Arab Emirates and Israel to normalize diplomatic ties, at the White House, August 13, 2020. (Brendan Smialowski / AFP)

NEW YORK — The Trump administration gave the UAE a commitment during normalization negotiations that Washington would not recognize Israeli annexation of parts of the West Bank until 2024 at the earliest, sources with direct knowledge of the matter have told The Times of Israel.

Prime Minister Benjamin Netanyahu had for months promised to annex large parts of the West Bank as early as July 1, but that plan was officially suspended as part of the normalization agreement with the UAE. However, the sides have not formally provided an exact time-frame for how long the matter has been “taken off the table,” as US President Donald Trump put it last month.

According to three sources with direct knowledge of the normalization negotiations, Emirati officials, led by the UAE’s Ambassador to the US Yousef Al Otaiba, focused on seeking assurances from the US, rather than Israel, on the matter.

They were largely uninterested in receiving an Israeli commitment to an annexation freeze, the sources said, since they understood that Netanyahu would not move forward with the move without US support; the Israeli premier for months had said as much himself.

Rather, a key priority for the UAE during the negotiations was receiving a commitment from the US that it withhold its support for annexation if Netanyahu once again began promising to immediately carry it out, the sources said. 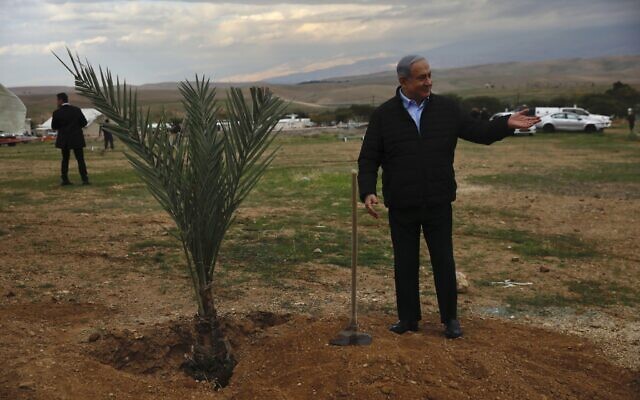 Israeli Prime Minister Benjamin Netanyahu prepares to plant a tree during an event on the Jewish holiday of Tu BiShvat, in the settlement of Mevo’ot Yericho, in the West Bank near the Palestinian city of Jericho, Monday, February 10, 2020. (AP/Ariel Schalit)

Trump administration negotiators, led by senior White House adviser Jared Kushner, agreed to set a timetable that was consistent with the one laid out for the Palestinians in the Trump peace plan, the sources said.

The Trump Administration’s “Peace to Prosperity” plan unveiled in January 2020 gives the Palestinian Authority a four-year window to engage with the peace plan, during which Israel is barred from expanding into areas earmarked under the plan for a future Palestinian state.

The UAE received a commitment from Washington that it would hold off on giving its blessing for Israeli annexation based on that same time-frame — that is, until January 2024.

“If Trump wins a second term, that [time-frame] covers [them] for most of it. If [Democratic nominee Joe] Biden wins, the issue won’t be relevant anyways because of his opposition to annexation,” said one of the sources with direct knowledge of the matter, who spoke on the condition of anonymity.

The Trump administration is hoping to use the final year of its hypothetical second term to “hold the Palestinians’ feet to the fire,” using the possibility of it otherwise backing annexation as a last piece of leverage to bring the PA to the table, another source said.

The White House declined to comment for this story, as did UAE officials in Washington and New York. Netanyahu has insisted that his plan to expand Israeli sovereignty to all the settlements in the West Bank and the Jordan Valley, in full coordination with the US, remains “on the table.