T. Belman. I believe this is fake news. It is fear mongering.  If you ignore the so-called opposition and relegate it to impotent posturing, you are left with a lot of positive signs and reasoning that says all the ducks are lined up and Netanyahu is ready to shoot. 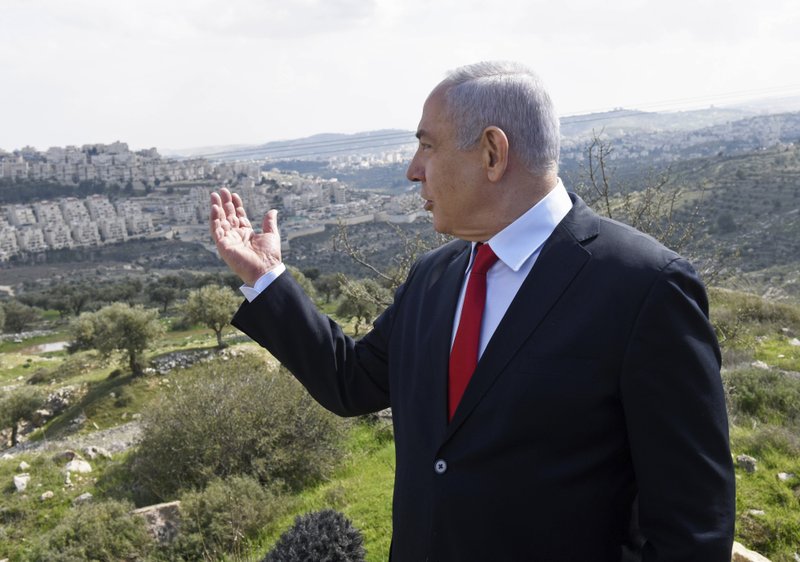 FILE – In this Feb. 20, 2020 file photo, Israeli Prime Minister Benjamin Netanyahu visits the area where a new neighborhood is to be built in the East Jerusalem settlement of Har Homa. A senior Emirati official warned Wednesday, June 17, 2020 that Israel’s planned annexation of parts of the West Bank could lead Arab states to call for a single binational state for Israelis and Palestinians. (Debbie Hill/Pool Photo via AP, File)

WASHINGTON (AP) — President Donald Trump’s top national security aides have been unable to reach a decision on whether to support an Israeli plan to annex significant parts of land the Palestinians claim for a future state, an impasse that could affect the timing of any action by Prime Minister Benjaimin Netanyahu.

The White House said Thursday that consultations with Israeli officials will continue as they try to formulate a proposal that would support Trump’s plan for an Israeli-Palestinian peace deal.

The Trump administration’s decision on annexation could alter America’s position in the Middle East and affect Trump’s election-year support with evangelical Christians, an important part of his political base. Virtually the entire international community opposes annexation, but many of Trump’s domestic supporters enthusiastically back it.

The announcement of a delay came a day after inconclusive talks about backing Netanyahu’s intention to extend Israel’s civilian administration to large portions of the West Bank.

The official said the White House meetings had been “productive” but added that “there is yet no final decision on next steps for implementing the Trump plan.” The official was not authorized to discuss the matter publicly and spoke on condition of anonymity.

Trump could side entirely with Netanyahu, who has cited July 1 as a hoped-for date for a decision, or endorse a less comprehensive takeover or oppose it outright, which is the most unlikely scenario. That date wasn’t set in stone and the uncertainty of the Trump administration’s position could make that date less likely.

But Netanyahu is expected to act before the fall, given uncertainty over Trump’s prospects for a second term and presumptive Democratic nominee Joe Biden’s opposition to annexation.

The partisan divide over annexation was highlighted Thursday with the release of a letter to the Israeli government signed by 189 House Democrats expressing concern about the annexation plan.

“Our fear is that unilateral actions, taken by either side, will push the parties further from negotiations and the possibility of a final, negotiated agreement,” the lawmakers said.

At stake for the Trump administration is its credibility with Arab partners cultivated by Trump and with European nations that he has antagonized on numerous fronts, from climate change to trade to the Iran nuclear deal.

Potentially more persuasive politically for Trump and his team is that his decision will affect his standing with evangelical Christians whose support he needs to win reelection. Although his campaign believes evangelical Christians will overwhelmingly vote for Trump, the campaign is concerned about a drop-off in enthusiasm and potential participation among an essential group of voters.

Among those favoring Netanyahu’s plan are Trump advisers such as Secretary of State Mike Pompeo, as well as Friedman, the U.S. ambassador, and a number of Republicans in Congress. They say annexation, in addition to pleasing Trump’s base, would make a peace deal easier because that step would blunt what they believe are unrealistic Palestinian expectations for a future state, according to officials familiar with the matter. They were not authorized to discuss the matter publicly and spoke on condition of anonymity.

But others in the administration and in Congress want to see no, or limited, White House recognition of potential annexation. They include Pentagon officials and Jared Kushner, Trump’s son-in-law and the architect of the Mideast peace plan, which has been roundly rejected by the Palestinians.

People on this side of the debate worry that a robust public endorsement would alienate U.S. allies in the Middle East and beyond at a particularly sensitive time in dealing with the coronavirus pandemic and threats posed by Iran.

Jordan, one of only two Arab nations with a peace deal with Israel, and the United Arab Emirates, a key U.S. partner in the Mideast, have come out against annexation and warned of severe consequences for the region if Netanyahu goes ahead. The European Union has voiced strong opposition and U.N. Secretary-General Antonio Guterres has said he hopes Israel will not proceed.

Trump’s reelection campaign has seen a weakening of intensity across many important voting groups, including evangelicals, during the pandemic, the economic recession and protests against racial injustice.

Trump has tried in recent weeks to find ways to restore that intensity, in large part because his campaign hinges more on maximizing the turnout of his base than winning over a dwindling pool of undecided voters.